Travels With My Camera 2020 - The Best Pictures

I had big travel plans for 2020. For obvious reasons most of them did not come to fruition, including a first time visit to Angola and a return to India. However, I did manage to travel a little before everything stopped. I spent a few days in Bangkok at the beginning of the year en route to my third visit to Myanmar. I also made my annual Israel visit but had to cut things short when it became obvious that air travel was grinding to a halt. This resulted in my doing significantly less photography than in previous years. It also meant that lockdown permitting, I spent some time in the streets of London looking for interesting shots much closer to home.

The pictures included in this post are some of my personal favourites from 2020. Others have been particularly well received on social media or at the exhibition I was able to hold at the Jeannie Avent Gallery in Dulwich, South London in August. This sixth incarnation of my Travels With My Camera show was the most successful so far. It was a great location and a rewarding experience. I enjoyed talking to visitors, listening to their feedback and learning from the advice of some of the more experienced photographers who came along. I had planned another exhibition in the cafe gallery of the Queen's Theatre in Hornchurch but this, like much else, fell victim to the lockdown.

Despite the disruption to my plans, 2020 provided me with some new experiences. In Myanmar I visited Kayah State for the first time and spent time in villages only recently opened up to overseas visitors. This included spending time with several members of the Kayah ethnic group who gave me free reign to photograph them going about their daily activities. The picture of Bilone with one of her grandchildren is perhaps my favourite picture of the trip, if not of the year. I was struck by the easy and obvious affection between grandmother and grandchild and how comfortable they were together. I also loved the way the light fell on Bilone's face, illuminating her love for the child.

Still in Kayah State, I visited a school for young nuns in Loikaw. Many of the girls are orphans or from families unable to look after them. They are placed in the nunnery where they will be fed, cared for and receive at least some education. Many of the children were shy, but one girl in particular was fascinated by the camera. She grinned at me and pulled faces before turning back to her work. She then turned round once more just as a patch of light fell on the wall behind her. And that was the shot.

Yangon is one of my favourite cities and once again I enjoyed early morning expeditions to the various wholesale markets, photographing the workers going about their daily tasks as well as capturing some interesting portraits. I especially like the picture of the shy flower seller who was at first reluctant to be photographed, but then changed his mind and approached me whilst carrying a huge bunch of white flowers, hiding just a little of his face being them. The woman seen ladling food from her bowl in the picture below was enjoying her breakfast in the wholesale fish market when I saw her. The Yangon based watercolorist and my good friend, Sai Pyae Sone Aye, used this photograph as inspiration for one of his beautiful works. I look forward to seeing it next time we meet.

Still in Myanmar, I visited the city of Mawlamyine for the first time. I happily spent a couple of days wandering through its narrow lanes and markets and am keen to return at the earliest opportunity. It was here that I came across a young man working on a new well, pumping muddy water from the ground in an area where instant access to clean water is not guaranteed. He is pictured below.

I love portrait photography and am especially attracted to informal portraits where the subject has less opportunity to hide their true mood or feelings. I particularly like three portraits from 2020. The first is of a young Jewish man taken during the Purim celebrations in Meah Shearim, Jerusalem. This is an ultra-Orthodox neighbourhood and photography is normally unwelcome there, but during Purim with the right approach and some contacts it is possible. Purim is a chaotic time in Meah Shearim. People wear costumes or disguises and alcohol consumption is encouraged - at least amongst the men. This young man seemed alone in the crowd, slightly apart from the celebrations and although physically present, somehow absent. I wonder what his story is.

The second portrait I've chosen from last year is of a little girl in Bangkok. I noticed her sitting with her grandmother on the step of a shop house in the Klong Toey market. Noticing the camera, and much to her grandmother's amusement, she began to laugh, wave and pose before finally leaning standing quietly against the house gate which framed her face perfectly. In this quiet moment she is somehow similar to the young man in Jerusalem, lost in thought, no longer with us.

My third choice is a portrait of Bilot, another Kayah woman and friend of Bilone featured in the picture at the top of this post. I spent some time talking to her before taking the camera out. She was optimistic and funny. She offered me home made rice wine and betel leaf and teased me about traveling alone. I think this portrait captures the self she showed me during our conversation. 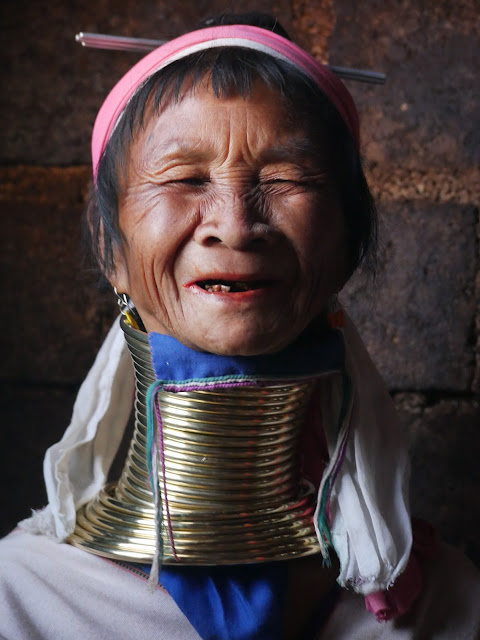 After my Myanmar/ Bangkok and Israel trips I had a long spell where I hardly picked up my camera. I fell ill in late March and took several weeks to recover and of course, the national lockdown much reduced the opportunity for my preferred kind of photography. However once the initial lockdown was lifted, I made several weekend visits to Spitalfields, close to my home in East London. The Sunday fleamarket market and nearby shops act as a magnet for many young, fashion conscious visitors. They also attract many local people who have lived in the area either their whole life or for many years. The pictures above and below were taken in Sclater Street near the market and represent the different audiences it attracts.

I originally intended to include just ten pictures in this post but whilst drafting it I decided to indulge myself and include two more shots from my time in Jerusalem. One shows an ultra-Orthodox Jewish boy entertaining himself whilst his father (not pictured) says his prayers at the Kotel (also known as the Western Wall and the Wailing Wall). I liked the interplay between the lines on his sweatshirt and those of the stacked chairs, as well as his stylised movement. The second picture is of a teenager, sunlight on his face and the worse for wear after over indulging at Purim.

Thank you if you came to my Jeannie Avent Gallery exhibition, or if you follow me on various social media. I hope to see you again soon. Happy New Year to everyone.

Please note: All rights reserved. None of these images may be reproduced, stored in a retrieval system, or transmitted in any form or by any means, electronic, mechanical, photocopying, recording or otherwise without my prior written permission.