Whitechapel Library - University of the Ghetto 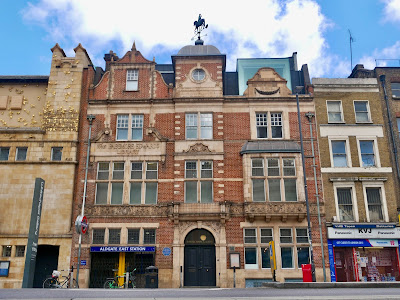 Twenty two London public libraries and cultural facilities have borne the name of Victorian journalist, philanthropist and politician John Passmore Edwards (1823-1911). His particular interest in funding public libraries may have been due to his reportedly having access to few books as a child. The first London library he funded was the former Whitechapel Library, now absorbed into Whitechapel Art Gallery at 77-82 Whitechapel High Street.

It opened its doors on 9th May 1892, the construction costs of £6454 being fully provided by Passmore Edwards but this was not the first attempt to provide a public library in this part of London. The Public Libraries Act of 1850 had followed a Select Committee report that suggested libraries could be used to steer people towards "temperate and moderate habits". Despite strong opposition to the Act from some MPs, it was eventually passed. The Act allowed for levying a charge on the rates of a half-penny in the £ in order to ensure continued funding. Such proposals had to be put to the vote locally before a free public library could be established and in 1878 the voters of Whitechapel rejected adopting the legislation, opposed to providing a facility "...wherein idle people may enjoy themselves".

Samuel Barnett, social reformer and Vicar of St. Jude's Church and his wife Henrietta, co-founder of Toynbee Hall campaigned for a library in Whitechapel but in 1891 Passmore Edwards came forward with the necessary sum.  A site was identified and architects Potts, Son and Hemmings were engaged to design the building. Initial services included a closed-access lending service, separate reading rooms for boys and girls and a reference library. Closed access meant that readers had to ask a member of staff to check the availability of books for them rather than having direct access to the stock. This was common practice in the early days of public libraries. There was also a museum of the natural history collections of the Reverend Dan Greatorex who had earlier established small collections of books on merchant ships for the use of the seamen.

Impressive hours of service were offered, including Sunday afternoons and late opening until 10pm. A programme of talks and lectures was held and schools were able to borrow items from the museum. Modern technology meant that the building had its own generator so as not be dependant on an external energy supply. Formal opening took place on 25th October 1892 with Lord Roseberry, Foreign Secretary and Chairman of the London County Council as the guest of honour.

By the end of 1892, there were 2,500 members including actors, comedians, diamond cutters, lard refiners, leather merchants, at least three journalists and my favourite, "ladies with no occupation given". This impressive list tells only part of the story of the library's role in its community which by 1914 is said to have included 90% of the total Jewish population of the UK. Evidence of its impact is borne out by the stellar list of writers, artists and future academics who made use of it during their youth. It is known that artist Mark Gertler borrowed art books from the library and practised drawing in the reading room. Fellow Whitechapel Boy David Bomberg was also a user.

Playwright Arnold Wesker used the library as a child and later spoke about borrowing and enjoying The Wind In The Willows. Fellow playwright and novelist Bernard Kops was also a regular user and loved the place so much he wrote a poem in its honour as well as a play set within the building. Child psychologist and author of The Ascent Of Man, Jacob Bronowski studied there and mathematician Selig Brodetsky learned English in the library. Born in Russia and one of thirteen children, Brodetsky had a fine career in academia. He studied at Cambridge, lectured at Bristol University, held a chair in Applied Mathematics at the University of Leeds and for a time was President of the Hebrew University of Jerusalem. East End chroniclers Simon Blumenfeld and Willy Goldman also studied there.

Perhaps the most famous former user was poet and painter Isaac Rosenberg. The child of poor Jewish immigrants from Lithuania, he was also the author of some of the most famous poetry to emerge from the First World War and was tragically killed in action on 1st April 1918. He is memorialised with a Blue Plaque on the exterior of the building. The achievements of Rosenberg and other writers and artists led to the library being referred to as the university of the ghetto.  Most of the users would have lived in dark, overcrowded and noisy conditions with no space for quiet study, reading or reflection. The library provided this and enabled some of them to go on to great things whilst to others it was a place to find peace and cultural enrichment. Lack of space at home remains one of the main reasons why people come to public libraries today and competition for study space can be fierce.

In 1900 the library came under the auspices of the former Metropolitan Borough of Stepney. Over the next few decades a large collection of Judaica was developed, lending became open access in 1922 and in 1930 a children's library was established in the basement.  Aldgate East Underground Station lies beneath the building and in 1937 a street level entrance to the Tube was inserted into the facade. The East End was severely bombed during the Second World War and damage was sustained to the second floor in 1940. From the late 1940's onwards the neighbourhood began to change with the large Jewish community moving away and being replaced by newcomers, particularly from the Sylhet region of Bangladesh which until 1971 was part of Pakistan.

Levels of use fell in the decades following the War and when I first visited in the early 1990's the building was in a poor state of repair and in need of investment. By this time, Whitechapel was under the control of the London Borough of Tower Hamlets, one of the poorest areas in the city and one whose library service was amongst the least used in London. The Council undertook a re-branding exercise, closing some libraries and opening a series of modern, purpose built Idea Stores, combining library services with adult education and expanded access to technology. Whitechapel Library was closed in 2005 and was replaced by the much larger and more strategically located Idea Store, close to Whitechapel Station, a street market and the area's main shopping facilities. On the last day of service, an evening event was held to commemorate the contribution of the library to the local community. It featured performances by Anna Tzelniker, the last active performer of the once great Yiddish theatre and a reading by Bernard Kops of  his poem, Whitechapel Library, Aldgate East.

The building received Grade II listed status in 1990. After closure it was acquired by the neighbouring Whitechapel Art Gallery which also has a long tradition of serving the local community and has exhibited works by the aforementioned Gertler, Bomberg and Rosenberg. On a personal note, most of my career was spent working in and managing public libraries. Researching for this post I realised that at different times I either worked in or was responsible for six of Passmore Edwards' London libraries. Is this a record?

Perhaps the last word should go to Bernard Kops.