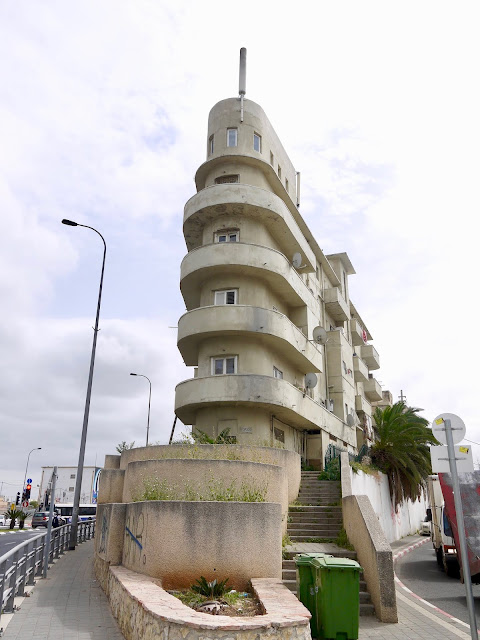 The corner of Lavanda and HaMasgar in Tel-Aviv is not the most fashionable part of the city. Many of the buildings are in poor condition and there are few facilities. The heavy traffic on HaMasgar also makes this perhaps one of my favourite city's most polluted areas. However, it is on this corner that an iconic example of Tel-Aviv's modernist architecture stands. Beit Shimon Levi (the Shimon Levi House) was built in 1934-5. It is said that Levi himself designed the house although it is also, and perhaps more accurately, credited to architect Arieh Cohen who was responsible for a number of other buildings in the city.

The building was designed in defiance of the planning laws in place during the 1930's which restricted height to no more than three storeys. Beit Shimon Levi consists of six storeys in total - a basement, a ground floor, three further floors and a small attic at the summit - double the legislated amount. Following difficult negotiations, Levi was able to secure permission from Tel-Aviv's first mayor, Meir Dizengoff, to proceed with construction and to move his family in. Unfortunately they were not to live there for very long and moved out in 1937 due to financial difficulties. In later years the house was used by the Haganah as a look-out point during the period leading to independence and at one point it also housed a synagogue. Today it is used solely for residential purposes.

The house is affectionately referred to locally as the ship building due to its ocean liner type design, narrowing at each end and rising to a significant height with both curved and squared off balconies. These nautical references were common during the 1920's and 1930's and are classic features of Art Deco and modernist architecture. The building has protected status but looks to be in need of at least external decoration. Although not on the itinerary of most tourists a visit to this part of town is well worth it as there are two more excellent examples of Arieh Cohen's work at 26 and 28 Rosh Pina Street. He was also responsible for the more centrally located 251 Dizengoff Street.
Posted by Yekkes at 09:50 1 comment:

Matalon Street is adjacent to Lewinsky, home of the famous shuk of the same name. Whilst the shuk is home to shops selling spices, herbs, olives, pastries and coffee, Matalon is the place to find everything you need for a party, not least costumes. I have passed along this street many times but only recently did I notice a small shop front with a sign behind the window reading Konditoriah Albert, 1935. 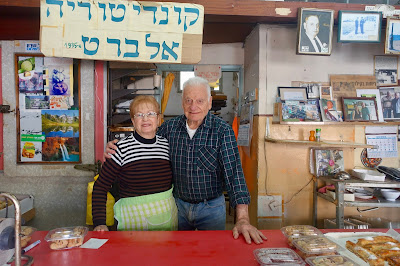 My curiosity was aroused by the possibility of seeing a piece of Tel-Aviv history and the potential for indulging my well known passion for all things sweet. Unfortunately Albert was closed. I tried again the following day still with no luck and began to worry that the shop had ceased trading. I decided to try once more. It was a case of third time lucky and to my delight I stepped into a world that has not changed in decades. The walls were covered with press cuttings about the shop as well as photographs of impressive, smartly dressed men and women from a world that no longer exists - Saloniki in the years before the Second World War Most striking of all was a faded, sepia picture of a woman with a serious expression and large, haunting eyes and wearing a traditional Greek head covering.

I was soon to find out that the woman in the picture was the mother of Albert Yehuda who brought his family from Saloniki to Tel-Aviv in 1935. The family initially settled in the Florentin neighbourhood where he established his famous Konditoriah that 84 years later still bears his name. The business relocated to its current location in the early 1960s and is today managed by Albert's son Yakov together with his wife Lavana.  I was able to spend a little time talking to Lavana who explained that only the best natural ingredients are used to make their confectionery and that everything is made on the premises and that their processes are the same ones Albert followed back in the 1930's. Whilst she was speaking, Yehuda was hard at work in the kitchen whilst her brother carefully removed the skins of hundreds of almonds preparing them for use in their various products. Many sweet treats are on offer here including a Greek version of Kadaif, made with nuts and the famous Marzipan Kisses - two boxes of which I managed to consume over a few days. Addictive. I also enjoyed the orange jellies that I bought on my first visit to Albert's.

Albert Yehuda came to pre-state Israel because he wanted his. family to be part of the re-emerging Jewish state. Lavana assured me that both her family and that of her husband came for purely positive reasons but throughout the 1930's many Greek Jews were to leave the country of their birth due to rising nationalism which on occasion turned violent. In July 1931 at least one person was killed and many Jewish families were left homeless in Saloniki when the city's Campbell district was attacked by 2000 rioters over a period of four days. Following this, many Jews left for Eretz Israel, Haifa in particular where they sought works in the docks.

Whilst talking to Lavana we break off regularly so that she can deal with the steady flow of customers who come in person or who call in their orders by telephone. A number of businesses in the neighbouring streets are owned by families that came from Greece but Albert's is almost certainly the last Greek konditoriah in Tel-Aviv (if not in all Israel) and a real piece of the city's history. 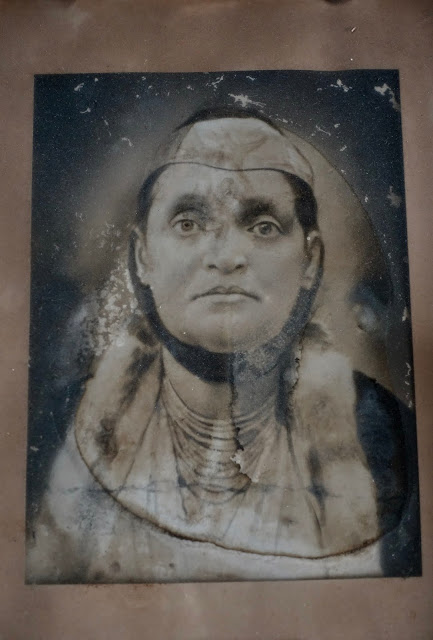