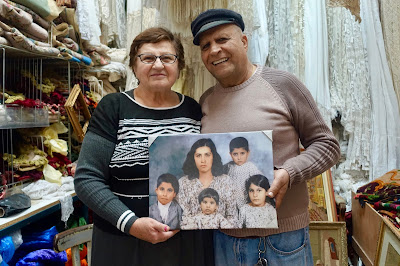 Sonia and Yakov Shmueli sell hand made velvet and lace curtains, tablecloths and antiques in Jaffa's Shuk HaPishpeshim (flea market). They opened their shop 38 years ago and have been there ever since. Like many Israeli couples, they come from very different backgrounds. Sonia was born in Drahovo a small town in the Carpathians, now part of Ukraine, but which has also been in Czechoslovakia, Hungary and the Soviet Union. Yakov was born into an Iranian family in Teheran 70 years ago.

Sonia came to Israel in 1971. A few years earlier it has been practically impossible for Jews to leave the Soviet Union and those who applied to emigrate were harshly treated as were their families. At the beginning of the 1970's, there was a relaxing of these restrictions and emigration steadily increased. On arrival in Israel Sonia worked in a religious kibbutz. "I loved it, working in the fields or the orchards. The work was hard but I was young and didn't know anything different. And every night I dreamt of a man who lived in Tel-Aviv". That man was Yakov. He had arrived much earlier, in 1949 just after the founding of the modern state of Israel. His family had a comfortable life in Iran but his father was a committed Zionist and wanted to make aliyah, despite the protestations of his wife. Yakov tells the story of how his father told her "we will go and see if we like it. If you are not happy we will come back to Iran". She agreed  to her husband's proposal but when they arrived, he kissed the earth and promptly tore up their Iranian identity papers so that return was impossible.

The family were initially housed one of the ma'abarot, a camp designed as temporary accommodation for the hundreds of thousands of Jews who came to Israel following independence in 1948. As the new state struggled to cope with such a large influx of people and at the same time fight a war of survival against its neighbours, the ma'abarot left a lot to be desired. Accommodation was flimsy lacking heating, ventilation and modern sanitation. Yakov remembers their home - a tent - being swept away in heavy rain. His father had spent all of the family resources on the move from Iran and so it was very difficult for them to improve their situation but after six months they managed to set up home in the HaTikva neighbourhood of Tel Aviv.

After leaving the kibbutz, Sonia found work in Netanya where she became friends with a girl who often spoke about her kind, handsome brother. The two friends spent a day together in Jaffa where they were joined by Yakov and a friend of his. Sonia remembers how the friend took a fancy to her and spoke continuously. Talkative as the friend was it didn't help his case as she only had eyes for Yakov and the two of them started to meet. Her father was not happy about the relationship, saying that this young man was not a Jew because "he doesn't wear a kippah". Nonetheless  he went to meet Sonia's family one Friday, wearing a kippah and to ask for permission to marry her. The initial response was a very definite "no". Several members of her religious, Ashkenazi family objected most strongly to her marrying a Sephardi Jew. Emotional scenes followed, described by Sonia as a "balagan" and she left home on shabbat, declaring she would never return. Yakov's sister came to the rescue speaking to various parties and eventually the way was paved for them to marry. They have four children and 12 grandchildren. I asked them how much they think attitudes have changed today and they told me that of course there are still people who hold the old prejudices but that they are a small minority. Their own children demonstrate this more open attitude and are married to people from several different communities.

In the picture at the top of this post the Shmuelis hold a reproduction of a photograph of Yakov, his mother and siblings taken just before they left Iran. He is the smallest child with his mother directly behind him.
Posted by Yekkes at 20:52 1 comment: