Close To Home - a new album from Ari Erev 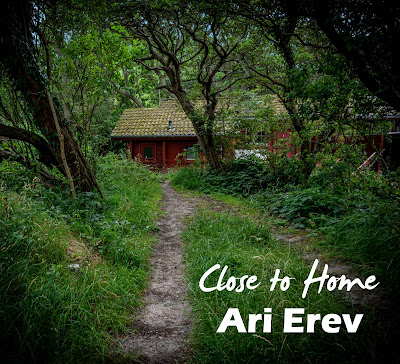 "Close to Home tells the story of family members, close friends and familiar places to whom we relate and feel deep emotions towards" says Ari Erev of his fourth, recently released album.

His latest recording combines jazz with strong Latin influences and occasional classical hints, creating a soundtrack for a musical exploration on the subject of home. The music communicates a range of emotions including optimism, hope, melancholy and nostalgia. I am very familiar with the place that Erev calls home and from the opening notes of the first track I can almost see the Mediterranean sunset, taste the coffee in my favourite Tel-Aviv cafe and imagine myself walking the streets of that city.

An impressive group of musicians have been assembled for this album. Yuval Cohen plays soprano sax, Assaf Hakimi double bass, Gaspar Betoncelj drums and Gilad Dobrecky percussion. Flautist Hadar Noiberg guests on two tracks. They are a very tight ensemble as demonstrated on the opening track, Israeli Story. It features a musical conversation between Erev's super cool piano and Noiberg's flute, setting the tone for the rest of the album. One of eight original compositions, it builds slowly from an understated opening, culminating in some delightful exchanges between the musicians towards the climax.

My other favourites include Afar, which Erev wrote for his daughter, Tal and Po (Hebrew for here). Afar is a mellow piece led by the composer with some impressive sax from Cohen and flute from Noiberg. Po, the final track sees Erev again joined by Cohen and by Assaf Hakimi on bass guitar rather than his usual double bass.

In addition to the original compositions there are five works by other writers. I often wonder how musicians choose non-original material for their albums and recently had the chance to ask Ari about his choices for Closer To Home. He began with a short answer "I like them a lot" before explaining that there is no specific reason for their inclusion. As part of his normal repertoire building he will play a song, experiment with different approaches and arrangements and if it works he will include it in performances or recordings. He said that Debora Gurgel's Para Sempre was included almost by chance. He recalled discovering the piece a few years ago, printing the charts and then forgetting about them until coming across them again a few weeks before recording Close To Home. He played the piece again and felt "an immediate click" hence its inclusion. Whatever the reasons for their inclusion, these tracks complement the original works and help carry the story being told by this album.

In addition to his having released four superb albums, Ari Erev is also a great and very engaging live artist. The first time I saw him play he performed several works of Bill Evans, who he lists as an important influence on him. That influence can be seen in Close To Home but he also has his own warm and engaging style, exemplified on each one of its tracks.  I hope to enjoy a live performance of this new work somewhere closer to Ari's home before too much longer.

You can hear clips from and buy Closer To Home here.