Picture Post 68 - Tagbilaran's Tailor and Barber Shop, a postcard from the Philippines

Tagbilaran is a major town in the Philippines on the Visayan island of Bohol. A town of over 100,000 inhabitants, it is a busy place with a great indoor market, some beautiful ancestral homes and easy access to the historical churches and natural sites on rest of the island. 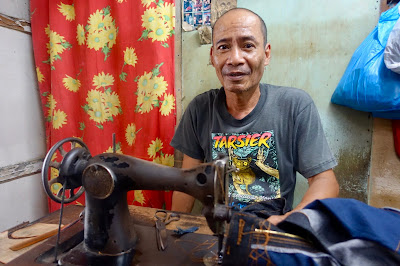 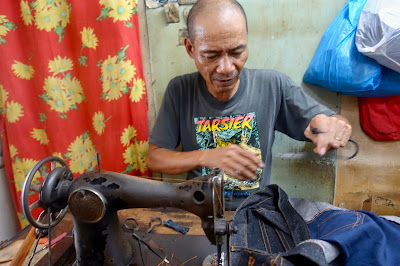 During my recent stay in the Philippines I spent a few days in and around Bohol. When walking in Tagbilaran I noticed a sign advertising an unusual business combination - Syvel's Clothier and Barber Shop. I have only come across this combination once before, several years ago when I had a haircut in a dry cleaners' shop in Nandi, Fiji. Syvel's is an open fronted establishment and as I passed there was no-one in the front of the shop. I went in anyway to see if anyone would appear and a man came from behind a curtain to tell me that the barber had gone to eat but would be back soon.

The curtain separated the salon from what at first looked like a family living room. Three young people, two teenagers and one little girl, were sitting at a table enjoying their lunch. They smiled and said good afternoon as if it was perfectly normal for a stranger to be there. There were also two men on the other side of the room, both of them sitting at sewing machines. They also greeted me before resuming their work. The first man invited me in to wait and we chatted briefly, him teasing me about whether or not I was looking for a wife. I told him I was only looking for a haircut but there was something else I would like. I am fascinated by the tailoring profession. It is an ancient, portable skill, disappearing in the west but still important in many parts of the world. One of the tailors was wearing a Tarsier t-shirt and sitting in front of a red curtain which was decorated with yellow flowers. The colourful backdrop and jolly t-shirt brightened the room which was otherwise devoid of natural light. Of course, I wanted to photograph him. He was happy to oblige. 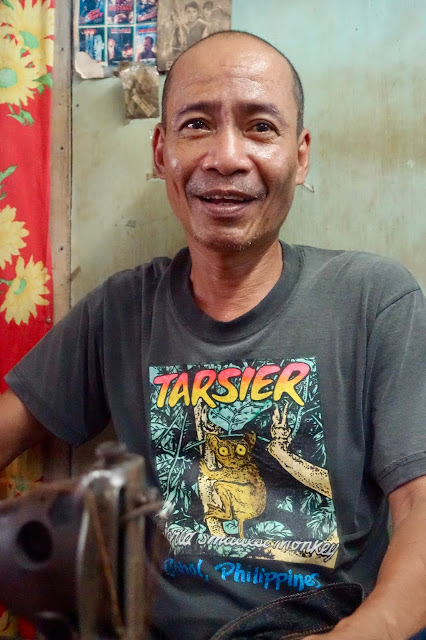 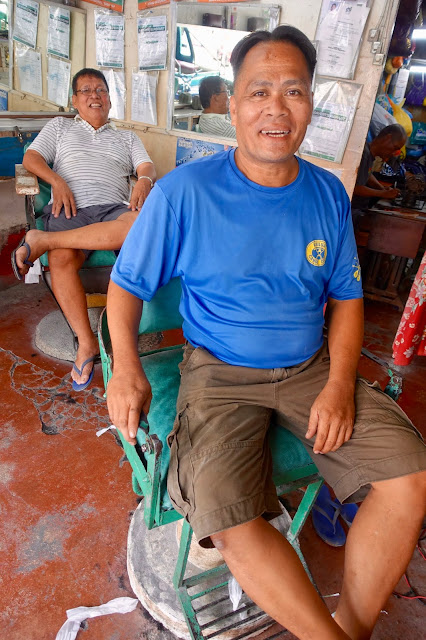 At this point the barber returned and showed me to the chair. Friends know that cutting my hair is not a big job but in the 15 minutes it took him to "tidy me up" as he said, he gave me a rundown on English football, Filipino basketball and one or two other sporting matters. I've been to barbers' shops in many parts of the world and almost all of them want to talk about English football. I grew up in Middlesbrough so football has no interest for me. As I was about to leave the first man reappeared and asked me to take his picture together with the barber. So I did and they were happy. 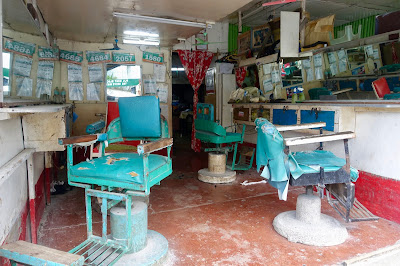 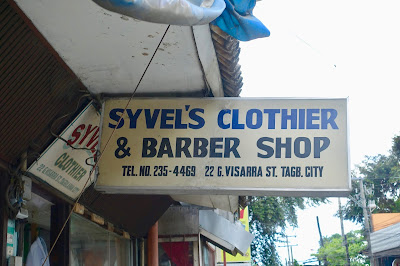 You can see more pictures from the Philippines here.
Posted by Yekkes at 20:02 No comments:

Some years ago I worked in Clapham in south London. I recently returned and was so impressed with the changes that I began looking in estate agents windows. Just looking I'm afraid as I can't get near the prices, but there was still plenty to enjoy. There are many good quality cafes and restaurants, a fabulous ice cream shop, an independent book shop and real bakers and butchers (even if I am a vegetarian). More than this, since I worked there Clapham has a new library and although it happened some years ago, the Council has also modernised its leisure centre. All good then. But even better, there are some very elegant art deco buildings that I have enjoyed discovering. Some of my favourites are featured in this post.

The Pavement is just around the corner from Clapham Common station and overlooks the Common itself. It is also the location of two art deco buildings that stand next door to each other. Trinity Close was designed by J.J. de Segrais and built in 1936. It is an elegant style moderne apartment building spread over five floors, set back from the road with an "in-out" driveway and small landscaped garden. The facade is constructed of dark bricks with two beautifully curved protrusions and a recessed central section. The main front door is protected by a simple concrete canopy which is in need of some care whilst at the upper level there is a small balcony topped by a sculpture.

Right next door to Trinity Close there is another stylish block of flats - Windsor Court. The ground floor is given over to commercial units (including that ice cream parlour) with a series of flats above. The main features are the two long balconies in the centre of the facade, one bearing the date of construction - 1935. The building name is displayed centrally above third floor and is topped with what was once a "tower" the impact of which is now lost due to the extra floor added in recent years. Neither Trinity Close nor Windsor Court are listed but both have a degree of protection due to their being located in the Clapham Conservation Area. I have been unable to find details of the architect for Windsor Court. Earlier this year a two bedroom flat in Windsor Court was sold for £569,950  which seems remarkably "cheap" both for London generally and for the location.

Maritime House is just a little further on from Windsor Court, in Clapham Old Town. Originally the headquarters of the National Union of Seamen it is a mixture of styles with what has been described as a neo-Georgian design and some nice deco elements. These include the dominating central tower with its large carved dolphins and ship's prow - the work of sculptor PGV Bentham - and nautical themed detailing on the doors and ground floor windows with waves and reliefs of ships. The architect was L.A. Culliford and Partners and the construction was completed in 1939. Until recently the local Job Centre was based here as well as offices and flats. There may be plans to convert the rest of the building to residential purposes.

Clapham Common North Side is home to two more restrained art deco/modernist buildings - Woodlands and Okeover Manor. They were built on the site of an earlier pair of Victorian houses which for various reasons were demolished and the current structures built in 1934-35. They are of relatively austere design but both have interesting features including Crittal windows, a porthole to the side of the main door of Woodlands and a recessed facade with two central balconies in the case of Okeover which  also has a rather attractive "jazz style" iron gate. Again, it has not been possible to identify the architects for these two buildings.

Okeover attracted significant notoriety in the past. In 1953 it was connected with a murder that took place on the Common whilst in 1969 Assia Wevill, mistress of poet Ted Hughes committed suicide in flat 3 by gassing herself and her four year old daughter. On a lighter note, the Okeover also has a Blue Plaque for music hall artist Marie Kendall who lived there in her later years before passing away in 1964.

Clapham South tube station is one stop away from Clapham Common. Opened in 1926 as part of a Northern Line extension it was designed by Charles Holden and was originally to have been called Nightingale Lane Station. Built as a single storey structure together with adjoining shops, it was always intended to build residential accommodation above. This did not  happen until 1937 when Westbury Court was added. This large apartment block dominates its corner location. Its red brick facade is relived by green detailing around the windows and cream bands between floors. There are also some decorative elements in the design of the brickwork on the side facing the Common. Designed by Edmund Cavanagh, Westbury Court is perhaps not the most elegant of Clapham's 1930's apartment buildings but it did offer a restaurant, a staff of eight, a night porter and a gardner to entice residents in the 1930's. Amongst other things the staff were required to remove bins from specially designed hatches and take them to the refuse lift.

There are two extremely impressive buildings within a few minutes of the station. I have recently posted about both of them. The former Balham Odeon cinema on Bedford Hill opened in April 1938 as part of Oscar Deutsch's famous chain of the same name. It experienced mixed fortunes over the years, finally closing in 1982 before being converted to its current use, Majestic wine stores. You can see more pictures of the cinema and read it's full story at my previous post.


Hightrees House in Nightingale Lane was built in 1938. it was designed by RWH Jones who was also responsible for the iconic Saltdean Lido near Brighton. The 110 units had access to a private restaurant, bar and swimming pool as well as to the roof terrace. Hightrees House was also the subject of a famous legal battle over rents, the details of which can be found, together with more about Hightrees, in my previous post.

The Oaklands Estate on Poynders Road is a ten minute walk from Clapham South station. It consists of three blocks of five storeys and a total of 185 flats. Built in 1936 by the former London County Council under the supervision of E.P. Wheeler, it is a striking modernist, social housing development. The two upper floors contain larger units and were designed as maisonettes. Following progressive design principles of the 1930's, each flat has wide steel-framed windows to enable maximum natural light. The most striking external features are those magnificent white balconies  that run the full length of the buildings at the lower level whilst the shorter corner runs include "rule of three" decorative indented stripes. Although the estate lacked the fancy porters, bars and restaurants of private flats they did offer shared facilities including a rear courtyard, children's playground, clubhouse, bicycle racks and invalid chair storage. The estate is unlisted, but has protection through being part of a designated local conservation area.

One of the challenges of researching 1930's architecture in London is that in many cases, details of the architect and date of construction have been lost. Some of the buildings mentioned above fall into this category but for all of them we have at least the date of construction. I have been unable to find any historical details for the former HSBC Bank at the corner of Clapham High Street and Stonhouse Street. It is a handsome building with attractive streamline features, a recessed upper level, portholes and contrasting cream panels and red brick on the facade. Any information would be most welcome!