Romania Romania - a yiddish musical memory of a disappeared world


"Oh Romania, Romania! Where can you find another place, a land as sweet, as nice, as beautiful? Living there was a pleasure, whatever your heart desired was within reach: mamaliga, pastrami, carnatzl sausage, and a glass of wine..."

Fond memories of a Romanian emigre? Well something like that. These are the opening lines of Aaron Lebedeff's celebrated yiddish paean to that land - his song "Romania Romania". Lebedeff wrote the words and the music and first recorded the song for the Vocalion record label in 1925. Born in Homel, White Russia in 1873 he had several years experience touring with Yiddish theatre companies before being pressed into the Tsarist army in the First World War and sent to Harbin, Manchuria in 1916 where he put on several shows for his colleagues. By 1920 he had made his way to America where he became a star of the American Yiddish theatre, with many successful productions well into the 1930's. He died in 1960.

Back to our song. Most people of a certain age can name at least one Yiddish song - even if they only know it in English. My Yiddishe Momme and Bei Mir Bist du Sheyn have been recorded by many of artists and often in English. But ask someone a little more familiar with this genre and chances are they will mention Lebedeff's Romania Romania. The song harks back to what was once considered to be the golden era of Romanian Jewry, the years between the first and second world wars. During this time the Yiddish theatre thrived, Jewish culture blossomed and despite continuing discrimination there was a degree of prosperity and progress for Romania's Jews.

Our song describes the simple pleasures of a less sophisticated, more rural Jewish world. The lyrics describe Romania as a land where everyone is drinking wine, eating delicacies and dancing. It is also described as an amorous land where "he who kisses his own wife is one who is crazy.." and where the cook may be dressed in rags but she is still pretty, makes great puddings and is quite partial to a kiss! Some of those delicacies are still on offer in Romania and indeed in Israel and old style Jewish restaurants today. These include mamalige - a porridge of yellow corn flour, karnatzl - a spicy beef sausage and patlazhele - an aubergine (or egg plant if you are not British!) salad. The song also mentions two cheeses - kashtaval which can refer to a specific cheese made from sheep milk as well as being a more generic term for yellow cheeses, whilst I am told (but can't find confirmation) that brinze is a kind of cottage cheese. The spellings may be unfamiliar to readers from Romania but please remember these are transliterations from the Yiddish which may have differed from the Romanian word or spelling! This is quite a list and I can almost imagine one of today's many trendy TV food shows "discovering" this style of cookery. Just reading the lyrics makes me feel hungry. 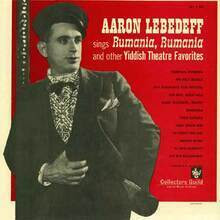 In Memoires des Juifs de Roumanie (Memories of the Jews of Romania), the authors describe Romania Romania as a popular folk song sung by Romanian Jews who emigrated to Israel and felt nostalgic for the old country. The song was a means of passing on that nostalgia to their children and grandchildren who couldn't share the memories and who would could not speak Romanian. The song paints a rosy picture of their life in Romania and its popularity may have been partly due to the struggle many Romanians had when they initially arrived in Israel - at a time when the country was absorbing hundreds of thousands of refugees from Europe and from North Africa and was faced with existential threat. Rina Frank's excellent novel "Every home needs a balcony" is an excellent description of this period - and a great story too.

There were once 800,000 Jews in Romania. Half of these were murdered in the Holocaust and most of the rest made aliyah to Israel after the war or through the communist years when Ceausescu allowed them to leave on condition that the Israelis paid him for each one. The Yiddish language came close to extinction at the end of Second World War - most of its speakers having been murdered and the re-established state of Israel having chosen Hebrew, Arabic and English as the national languages. The language lived on in the USA where a number of Yiddish radio stations attracted sizeable audiences and in the homes of the remnant of eastern european Jewry. Today it is undergoing something of a revival and is used by large numbers of Haredi Jews day to day whilst there are a plethora of Klezmer groups preserving the language through music.

And to prove the enduring attraction of Yiddish song and Romania Romania in particular, the song featured in the recent musical Paper Dolls where it was sung by a group of Filipino drag queens at a party for an elderly Orthodox Jew. No kidding. One of my favourite versions of the song is Yafa Yarkoni's which you can find here where you can also read about today's Yiddish theatre in Bucharest.

And finally, the Barry Sisters version...