A Case Of Mistaken Identity - The Story Behind A Photograph 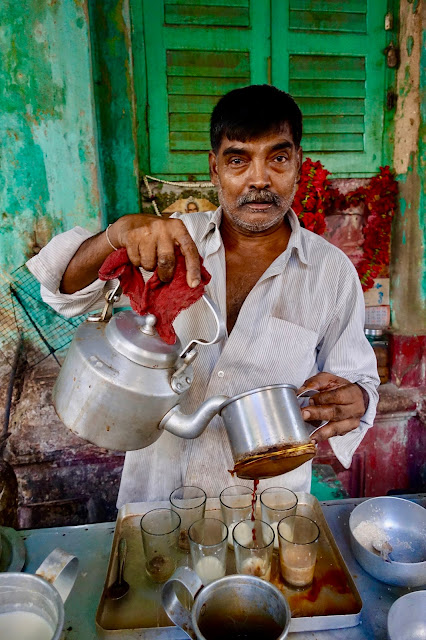 I first met the man I now know as Dilip Ghosh in September 2017. As I walked along Beadon Street in North Kolkata I noticed a chaiwallah serving tea to a long line of customers. Those who had already been served stood chatting in groups or sat squeezed onto a long bench busy with tea drinkers. The chaiwallah was an impressive figure with his neat black moustache and hair and off-white shirt. His stall was in front of a bright green building. A deep red garland hung on the shutters behind him matching the colour of the cloth wrapped around the kettle's hot handle. I caught his attention, indicated the camera and received the slightest nod of approval. He continued working whilst I took several shots and then showed him the best of them. He nodded again and continued pouring tea.

I ordered a chai and stood to one side whilst he prepared it. Whilst I waited a neatly dressed man, perhaps in his sixties, stepped forward and insisted on paying for my drink before asking me the usual questions about work and family. He said that he had worked for a British company before retiring on what he described as a comfortable pension. He invited me to sit with him and told me that the chaiwallah, who did not speak English, was one Mohan Lal and that like many other people in Kolkata, he was originally from Bihar. I scribbled these details into my notebook and referred to them shortly after whilst blogging about my time in Kolkata.

I returned to the city a year later and looked for Mohan so that I could give him the picture. It took three days to find him. On this occasion, I was accompanied by a guide who told him we’d been looking for him and that no-one in Beadon Street had heard of him. The reason for this soon became clear. His name is not Mohan Lal and he is not from Bihar. He is Dilip Ghosh and he was born in Kolkata. Not only this, he had lived all his life there and had no idea why my erstwhile friend thought otherwise. I handed him the picture which he admired for a moment  before calling to his wife and son to come and look at it. Mrs. Ghosh was very excited and took it to show to customers and neighbours before requesting a picture of her and her husband.

Between my second and third visits to the city, I staged a small exhibition of my photographs in a series of London venues and used Dilip’s picture on the promotional poster. He now displays it behind his stall beside the calendar he produces annually and gives to his regular customers.

There is an odd coda to this case of mistaken identity. In early 2021 I posted the picture on my Instagram account. It received a positive response with many likes and new followers, but I soon noticed a series of laughing emojis in the comments box, some of them posted alongside Dilip’s name. I began to worry that I’d made a mistake of some kind or that I still had the wrong name. I googled “Dilip Ghosh” to try to understand what was going on. It seems that my favourite Kolkata chaiwallah has a namesake, a prominent West Bengal politician. The thought of him selling cups of tea had amused many of his constituents.