The Novo Cemetery in Mile End is just a ten-minutes walk from my home. I have lived here for almost twenty years but it is only very recently that I "discovered" the cemetery through the Discovering and Documenting England's Lost Jews project. Established in 1733 and now tucked away within the grounds of Queen Mary University, the cemetery has been the resting place of some very prominent people. Champion boxer Daniel Mendoza was buried here as was Benjamin Disraeli whose grandson of the same name became Britain's first Prime Minister of Jewish heritage, famed comic actor David James (David Belasco) and Diego Pereira who served as financier to the Austrian Empress, Maria Theresa. It is fascinating to think that these illustrious characters were buried just a short walk from where I now sit.

It has also been the final resting place of the less well known, including tailors, rag merchants, quill pen makers and feather makers who lived and worked in the once predominantly Jewish East End and were eventually buried here. I wonder if any of the traders mentioned in my recent post on Sclater Street were laid to rest in the Novo Cemetery.

The graveyard itself has quite a story. In 1656, after an absence of almost 400 years, the presence of Jews in England was accepted but not officially recognised. In the same year, a small synagogue was established in Creechurch Lane in the City of London and in 1657 a piece of land was purchased in the then rural Mile End, for use as a burial ground. Over the next several years as this predominantly Sephardi community became more established and expanded in size a larger cemetery was needed and in 1726 an additional piece of land was leased for this purpose. A short distance form the original burial ground it was named the Nuevo (new) Cemetery and the former site became known as the Velho (old) cemetery. The first burials took place in the Novo in 1733. 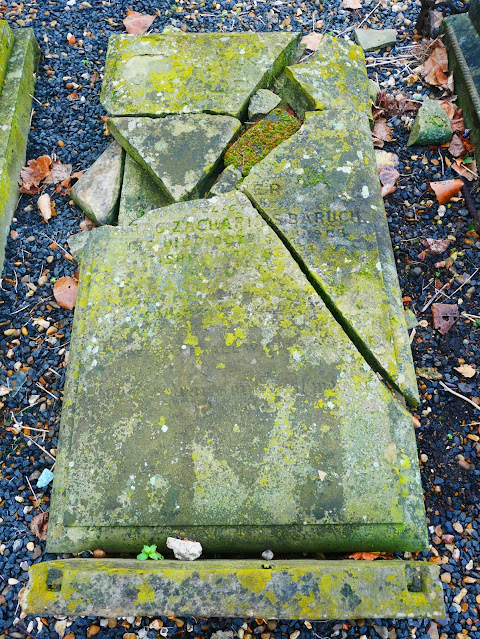 Over the next century London's Jewish population continued to grown and in 1855 it was necessary to purchase a further 1.7 acres of land to accommodate its needs. By 1899 the cemetery held about 9000 graves. At this point, the Sephardi community began to drift away from this part of London and a new cemetery was established in Golders Green. In 1906 the Novo was closed for adult burials and in 1918 for children. Despite this, occasional internments took place into the 1970's.

In 1973 about 7000 bodies were disinterred from the pre 1855 site and reburied in a communal grave in Essex, leaving about 2,000 graves in place. This was because the expanding Queen Mary College, now a University, required additional space and an agreement was reached between the Sephardi community and the College to transfer part of the burial ground to College ownership. Daniel Mendoza was one of those disinterred and this great Jewish and British sporting hero now lies unacknowledged in a shared pit.

Wandering through the cemetery on a crisp, cold winter's afternoon I was struck by how much cemeteries can tell us about the communities they serve and how many stories are waiting to be unlocked from them with just a little research. As already noted, the Novo Cemetery is a Sephardi burial ground and this is evidenced by the Spanish and Portuguese names marked on almost every one of the gravestones as well as by the tradition of laying the stones flat rather than upright. This is to remind us that regardless of our status in life, in death we are equal. Some gravestones carry visual clues to the lives of the deceased. An image of hands usually denotes that the person is a Cohen, that is, of the priestly caste and that they can claim to be descended from Aaron, brother of the the Biblical prophet Moses. Images of books may indicate that the deceased was a scholar or rabbi, whilst a tree or a tree being cut down means that a life was cut short. Candlesticks are sometimes carved into the headstones of women as a reference to their responsibility for lighting candles on Shabbat.

Non-Jewish visitors may wonder why there are small stones or pebbles on many of the graves. Various explanations are given for this including the belief that the soul of the deceased remains near the body for a while after death and that rocks will prevent it from leaving too soon. There may also be practical reasons for this tradition. In Biblical times burials would take place under a pile of rocks rather than a heavy slab and so the placing of stones on graves in the modern era may be a reflection of this. Today it indicates that someone has visited the grave.

It is important to note that although all of those buried here are from the Sephardi community, not everyone came from Spanish or Portuguese family backgrounds. A whole row of graves is given over to the illustrious Sassoon family who originated from Baghdad in Iraq and became one of the world's foremost merchant families over several generations with business interests in  Bombay (today Mumbai), Shanghai and Hong Kong. Amongst others, Flora Sassoon, wife of David Sassoon founder of the dynasty and former leader of Bombay's once substantial Jewish community, (nee Farha Hyeem) is buried here.

Cemeteries have always been important sources of information for historians but today the little bit of information contained on a headstone can lead us on the most fascinating of virtual journeys via the internet. The stone pictured at the top of this post is that of Orovida Abigail Bensusan who died on 30th July 1912 aged 69. We can learn from it that she was the daughter of Samuel and Esther, that she probably never married (no other family name is given other than that of her parents) and the quote from Proverbs indicates that she was well thought of and did not need praise.

"Give her of the fruit of her hands and let her own works praise her in the gates".

A little research reveals many interesting details about her and her family. Both parents were born in Gibraltar which remans home to a significant Jewish community today. Although I have not been able to find out when the family came to London, the 1871 census shows Esther, Orovida's mother, living in Lambeth. By 1881 she was living in Penge not far from the site of the Crystal Palace, which perhaps indicates that the family had become more prosperous.

Although Orovida appears not to have married, according to the Ancestry website, she did have a child with one Abraham Corcos, a merchant born in Oran, Algeria in 1810. He was father to at least nine children, some of them born in Algeria and Morocco, and who had three different family names between them. Orovida and Abraham's daughter, Esther Corcos was born in London in 1873. Details of Orovida's life after the birth of Esther are sketchy until 1911 when it is known that was living in Stamford Brook, Chiswick with her niece Esther (daughter of Orovida's brother Jacob) and her niece's husband...famed French artist Camille Pissarro. Orovida was clearly a much loved aunt as the couple named their only daughter after her. Orovida Camille Pissarro was herself to become a distinguished artist studying with her father and then with Walter Sickert before rejecting their styles in favour of Chinese and other Asian techniques.  Her works can be found in the collections of both the Tate and the Royal Academy.

The Novo Cemetery is full of stories like that of Orovida Abigail Bensusan and whilst not everyone will have had links with world famous artists, discovering their personal histories will be  just as interesting. The website of the Discovering and Documenting England's Lost Jews project includes testimony from Jews with Sephardi heritage, more details about the history of the cemetery and stories of some of those buried there. The cemetery is open to visitors and is a short stroll from either Mile End or Stepney Green Underground stations.