Sclater Street runs from Bethnal Green Road near the Shoreditch Overground Station to the junction with Brick Lane. Quiet and almost abandoned during the week it comes alive on Sunday when there is a flea-market on a rough piece of ground normally used as a car park. The street is closed to traffic and stalls of varying degrees of authority sell household goods, second hand clothes, training shoes and bicycle parts. Its also possible to buy a bicycle from one of the several dealers who stand outside the flea-market and who are subject to regular checks by police looking for "lost" bikes. The Sunday crowd fascinates me. In normal times it includes many tourists on their way to Brick Lane or to Spitalfields' covered market as well as local old timers, hipsters, students and occasional film crews who like the "edgy" urban environment. It is also possible to hear many different languages being spoken with Bengali, Arabic, French, Hebrew, Spanish, Japanese, Italian, Russian and Turkish, reflecting both the local communities and the tourists. In recent years a handful of restaurants, small cafes and the relocated Brick Lane Gallery have added to the eclectic mix and attract yet more visitors. 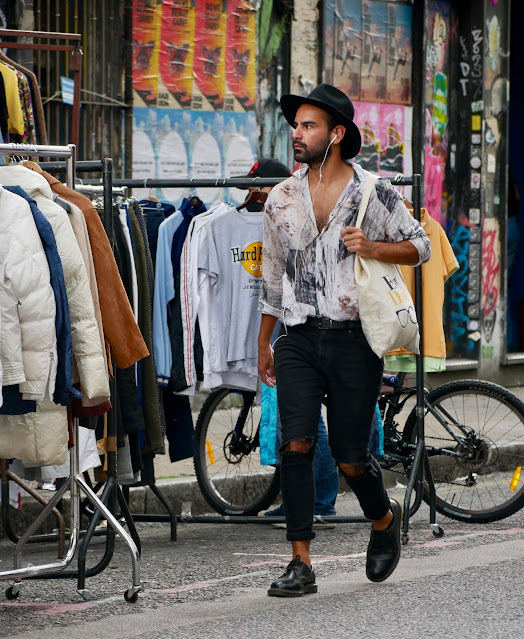 The street has an interesting history. On the left hand side of the road when walking from Brick Lane towards Bethnal Green Road, there are three weavers' houses, built from 1718-1720. The original inhabitants would have been Huguenots, French protestant refugees fleeing religious persecution. In London many of them were employed in the textile industry. Numbered 70-74 Sclater Street, each house consists of three storeys and a cellar with a single room on each floor. The houses are in a disgraceful condition, covered in graffiti and seemingly abandoned. They back on to and are part of the Bishopsgate Goodsyard site which I understand is the subject of an office development proposal. Whatever the implications of this for the weavers' houses, they are already at risk due to their condition. The website of Chris Dyson architects contains information about a plan to restore the facades but dates from 2013 with no more recent details.
When researching for this piece I came across Sclater Street's entry for the 1891 Census which includes a full listing of all residents in the three houses. Number 70 was home to the Hall family, the head of which, James, aged 44, is listed as a "bird dealer-dog". Nine people lived there including James' brother Daniel aged 22, also employed as a bird dealer-dog and one Caroline Lambert aged 68, listed as a bird dealer. All the residents of number 70 were born in London, most of them in the East End.
Number 72 was home to seven people including brothers Domenico and Donatio Puncia, both born in Dorigo, Italy. Domenico aged 31 is listed as a restaurant keeper and his brother, a year older, as a cook. The brothers shared the property with six members of the Waters family. William Waters, 28 worked as a stone mason and his wife Mary Ann, 27, was a needle woman. The youngest member of the household was their daughter Mary, just two weeks old. Like the Halls next door, the Waters family were all born in the East End, most of them in Bethnal Green.
Number 74 was home to nine people, most of them members of the Stanwich family. 30 years old Abraham, a picture framer was listed as head of the household. His wife Rachael was a little older than him at 33 and together they had four small children - Judah, Annie, Amy and Alice. Other residents included Abrahams' younger brothers Hyman and Meyer -  a picture framer and a tailor respectively. The other resident was a 22 year old woman listed as "Cohen Kitty" whose name was almost certainly  mistakenly inverted in the records, "Kitty Cohen" being more likely. She worked in the tailoring industry as a button hole maker. The older members of the family have "Russia-Poland" listed as their birthplaces the others were born locally. Their names indicate that the family was Jewish.
The records for other buildings in the street show that other residents came from Lancashire, Birmingham, Dorset and Wales as well as from Austria and Poland. Occupations listed include boot makers, hatters, cabinet makers, beer house keeper, fancy bird cage maker, ship foreman and numerous jobs connected with the garment industry. This street must have many stories to tell.
The occupations listed for James, Daniel and Caroline at number 70 give a clue as to why they were living in Sclater Street. From the 1850's onwards people came here to see the Bird Fair. Originally located in nearby Club Row it expanded across Bethnal Green Road as time went on. Birds and dogs were traded and there was widespread belief that some dogs being sold at the Fair were "hot" property. There is even a record of a 1912 court case relating to a stolen dog found there. By the 1920's as well as birds and dogs, cats, rabbits, mice, squirrels, tortoises and various other animals were being sold at the Fair. In 1923 a stampede involving up to 4,000 people resulted in the loss of 2000 birds and the death of at least 100 cats and dogs. You can read more about the Bird Fair and see pictures of Sclater Street from the early 1900's here. 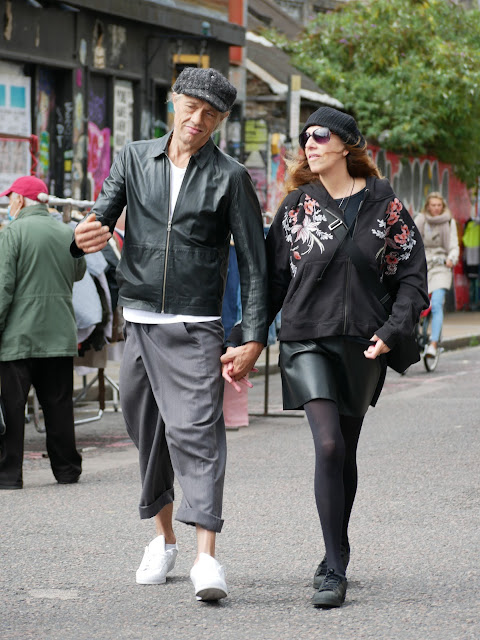 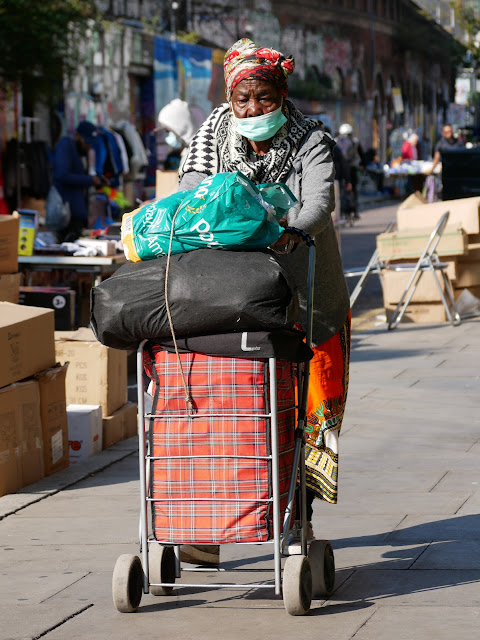 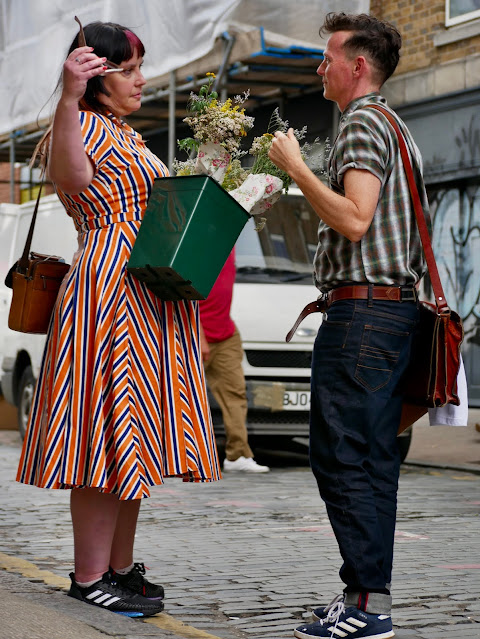 Coming back to today, Sclater Street continues to fascinate and tell stories. It is perhaps my favourite London location for both people watching and street photography. I like to find a sport and watch the comings and goings as the weekend drama plays out over several hours. Its proximity to Brick Lane, Spitalfields Market and what remains of Petticoat Lane means that I can move between these locations quickly and also take advantage of the many coffee and snack stalls. The pictures featured in this post are all recent candid shots taken on Sclater Street. They include at least one candidate for the cat walk, an elderly woman wheeling her goods to her favourite spot before spreading them out for sale, a conversation between a director and an actor during a filming session and of course several mask wearers. Some of the pictures feature a backdrop of colourful posters, some of them scrawled with graffiti. The wall on which those posters are displayed is the facade of the aforementioned weavers houses. 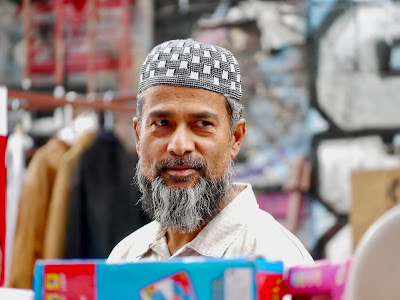 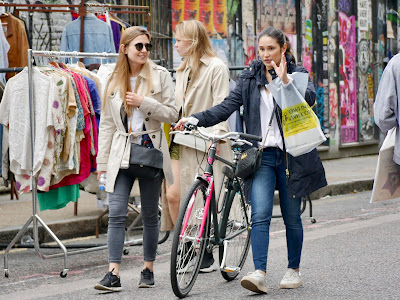 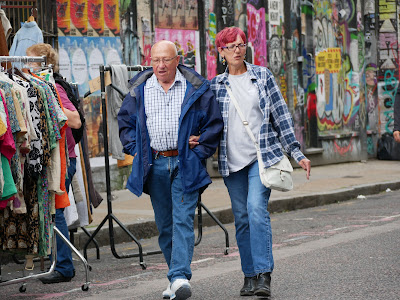 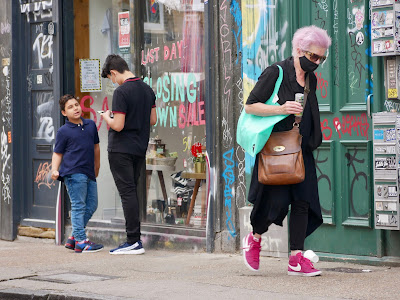 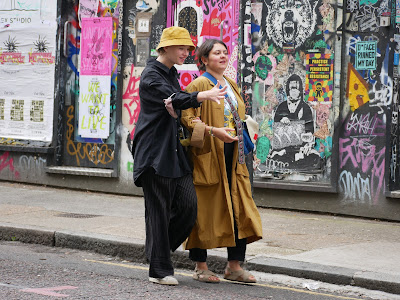 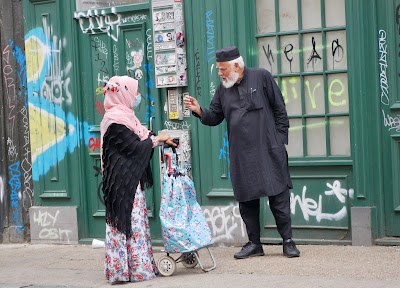