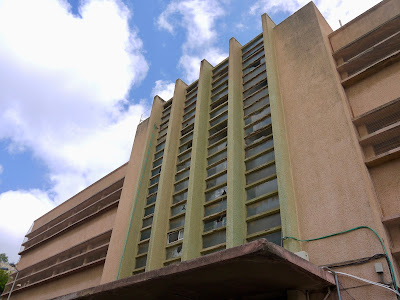 Haifa's Shuk HaTalpiot is one of the most vibrant parts of the city. Located at the junction of Sirkin and Lunz in the Hadar neighbourhood, the streets are filled with stall after stall of colourful and aromatic fresh vegetables, fruit, olives, cheeses and spices. There are also butchers and fishmongers and stalls selling household goods of all kinds from bedding to kitchen utensils, clothing to electrical goods.

Every day (except Tuesday afternoon and Shabbat) thousands of shoppers come to the Shuk for great locally grown produce at very competitive prices. Many of the customers are from the large Orthodox community that lives in the area around Herzl and Nordau streets, but everyone comes here and Arabic, Russian, French and English can be heard here as well as Hebrew. Even a few tourists manage to find their way to the shuk. On my recent visit I took away a large box of cherries for a mere 20 shekels, tasted other fruits, sniffed at the colourful spices and would have happily stocked up if I had been staying longer. There is something about the atmosphere that gives you the urge to buy!

Whilst there are many open air stalls, the best part of the market is surely the basement level of the old shuk building. Descending from the street, the first thing that struck me was the riot of colour from the produce and the cacophony of sound from competing stall holders trying to attract custom. The place is packed to bursting with stalls, shoppers and the sounds and smells of this very Haifan experience. The produce is terrific but this building that once housed all of the market is now in very poor condition, giving only a hint of its original glory. 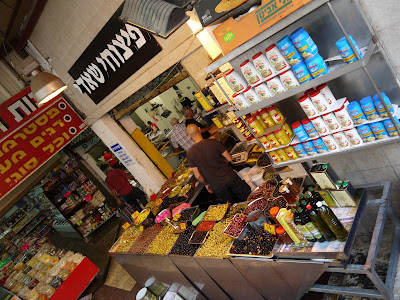 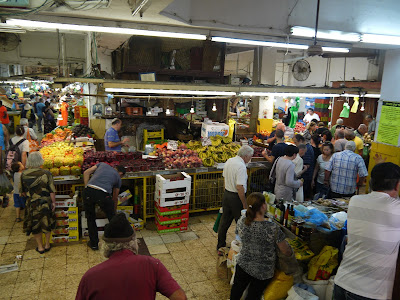 Designed by Moshe Gerstel, this huge structure was built between 1939 and 1940, just after the Arab riots of 1936-39. A competition was held to design a large market hall that would not only serve the mainly Jewish population of the Hadar district but located on the border with the Wadi Salib neighbourhood, it would form a line of defence against possible attack. Gerstel's winning design  included a central space with a coloured glass roof slab above a horseshoe shaped hall, flooding the building with natural light. The exterior design was stark but included decorative fins over the main entrance, separated by a glass ladder which admitted even more light. The stalls were to be arranged across three upper galleries as well as on the ground floor and in the basement. 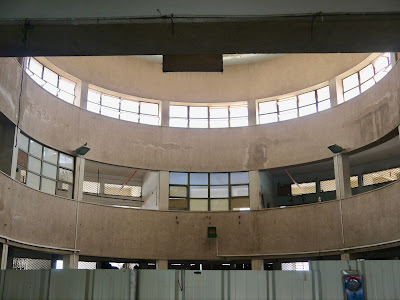 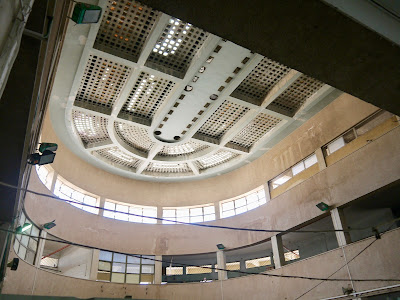 Whilst the basement remains in use, the only other part of the building still operational is the ground floor which has a few very low quality stalls and a small cafe. The upper levels are sealed off and the view down to the basement is blocked with hoardings. Many of the windows have been broken and feral cats roam around the ground floor and beyond. Thankfully netting has been put in to prevent pigeons causing further damage but the whole structure is in a sorry state and its future looks precarious unless urgent action is taken. Friends in Haifa told me that in recent years the city administration has been discussing the future of Gerstel's building and how to save it. That has to be good news. Slow but sure efforts are being made to revive other long neglected parts of the city including the port area, but the authorities need to act quickly with the shuk or the city will lose an important part of its heritage. 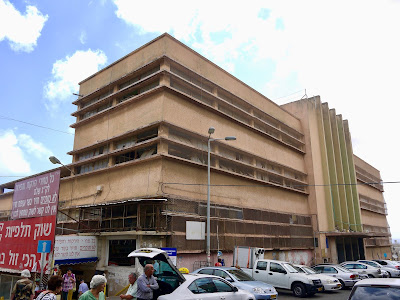 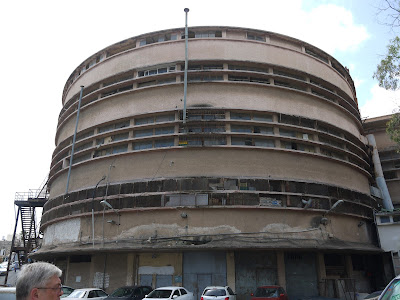