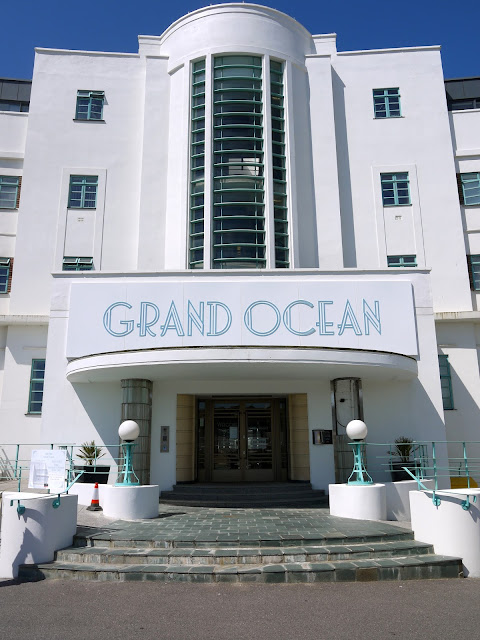 Saltdean is a seaside town just five miles along the coast from Brighton. It may not attract the crowds of visitors that its larger neighbour receives, but it is home to a former hotel that once attracted thousands of guests every year. The Ocean Hotel opened in 1938 with over 300 rooms and a dining room that could seat up to 300 people. There was also a roof garden, a ballroom and a resident orchestra to entertain the guests as well as breathtaking views of both the sea and the South Downs. Such splendour attracted the rich and the famous. The Earl of Glamis attended the opening dinner and there are stories that both Dame Margot Fonteyn and Bette Davis stayed there!

Designed in the art deco style by Richard Jones it was supremely elegant and built at the top of a hill, it must have been very imposing in its day. Jones was also responsible for designing Saltdean Lido, another art deco building close by. The Lido is visible from the hotel but is currently closed and in poor shape, although it appears to be undergoing restoration. The hotel has fared slightly better but has been converted into an apartment building, albeit retaining the stunning white facade, elegant lobby and fabulous main staircase. The views from the building are not what they once were as the developer responsible for converting it to apartments has also built several new blocks of flats between the hotel and the sea, blocking much of it, but it is still possible to catch a glimpse of the sea from some parts of the building which is now called Grand Ocean. 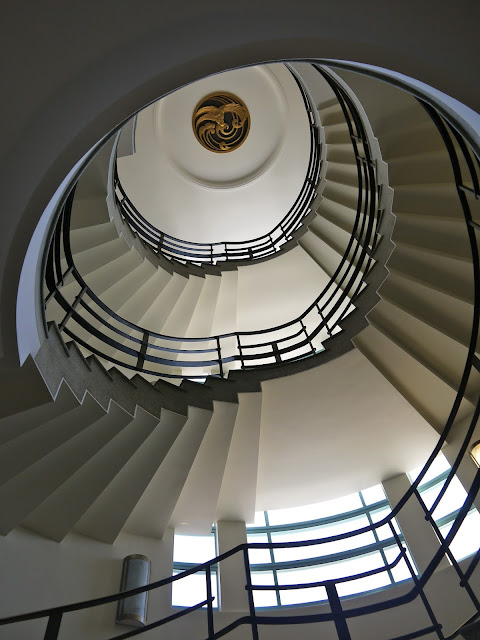 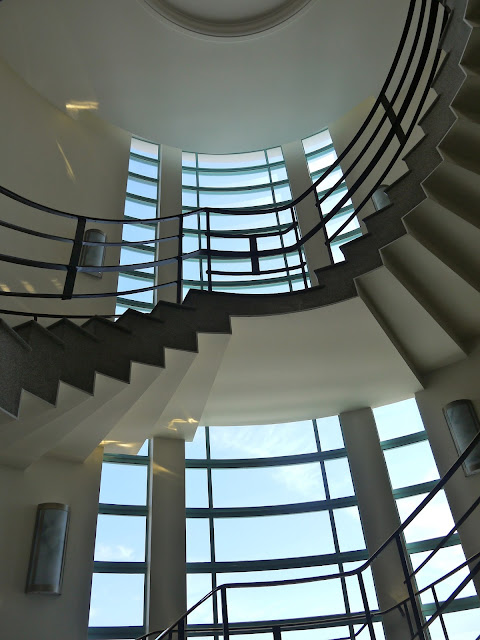 It is no surprise that a luxury hotel was built in a small seaside town in the south of England during the 1930's. It is also no surprise that it was requisitioned during the Second World War for use by the Auxiliary Fire Service before becoming a fire service college opened by Herbert Morrison, the then Home Secretary. Slightly more surprising is that when the hotel was handed back to civilian use in 1952, the lease was acquired by Billy Butlin who turned it into one of his famous holiday camps, attracting families, honeymooners and other guests throughout the 1950's and 1960's until 1972 by which time the allure had begun to fade due to the availability of cheap holidays abroad. The Rank organisation purchased the building in 1972 and struggled on until 1999 when it was again sold to the Grand Hotel Group who sold it to a developer in 2005.

I have wanted to visit Saltdean for a long time and this weekend I finally managed to get there. The train from London to Brighton takes just under an hour and on arrival I took a taxi asking the driver to take me to Saltdean Lido from where I planned to walk to Grand Ocean. Imagine my surprise when I realised that instead, he had driven me to the car park of the Brighton branch of the Lidl supermarket. It must be my northern vowels, although he confessed never to have heard of the Lido despite assuring me he knew where I wanted to go when I got in. I got there in the end. I even managed to get a peep inside the lobby of Grand Ocean and to take photographs of the staircase, the old reception desk and some of the other remaining art deco features. It was strange to enter what must once have been a busy, bustling space full of happy holiday makers and Butlin's Redcoats and which is now quite  silent apart from the discrete comings and goings of the residents. The beautifully restored reception desk is now purely decorative and hasn't seen a guest since 1999. 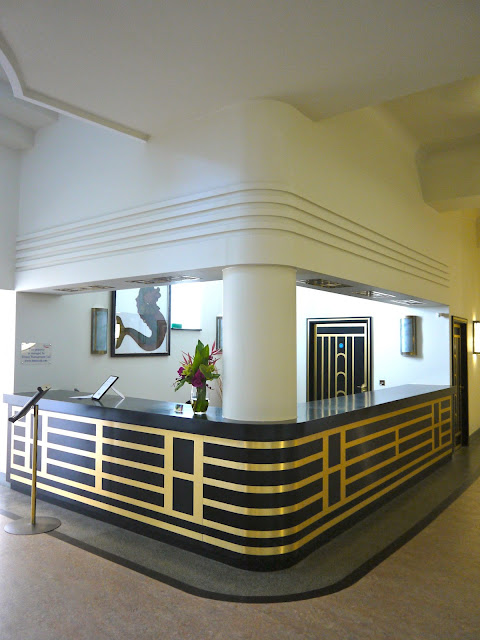 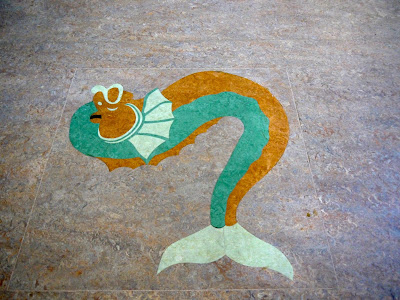 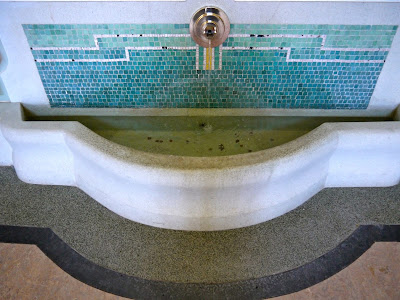 The lobby has been sympathetically restored with deco motifs on the lift doors, fish designs on the floor and the marble fountain, but the staircase is the main attraction, drawing us up into its spiral and showing off its interesting geometric shapes, with the steps being mirrored on the underside of the staircase. The lobby is pure 1930's art deco and has ben used to film an episode of Poirot. The crisp, white facade contrasts with the green railings, window frames and lettering on the external name board whilst the portholes continue the "ocean" theme. The pillars to each side of the main door  are clad in glass and act as lights for the entrance. One of them appears to be either damaged and in need of attention. The gardens at the front of the building have also been restored with a terraced waterfall and white stone walls.

Its a pity that the hotel had to close. It was of its time and is now a bit off the beaten track for modern day tourists and visitors, but it isn't hard to imagine it in its heyday with thousands of visitors enjoying the sunshine and luxurious surroundings just a few minutes from the sea and the lido. Today, it is just a bit too far from Brighton and is unable to compete with the city's many hotels, their proximity to the railway and hundreds of shops, restaurants and bars. At least its still here and still in use - thanks in part to its Grade II listed status. I wonder what Billy Butlin would have thought of it all, not to mention Richard Jones whose masterpiece it was… 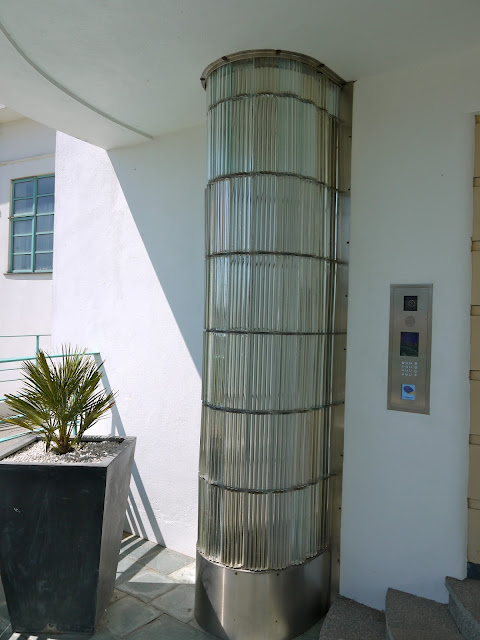 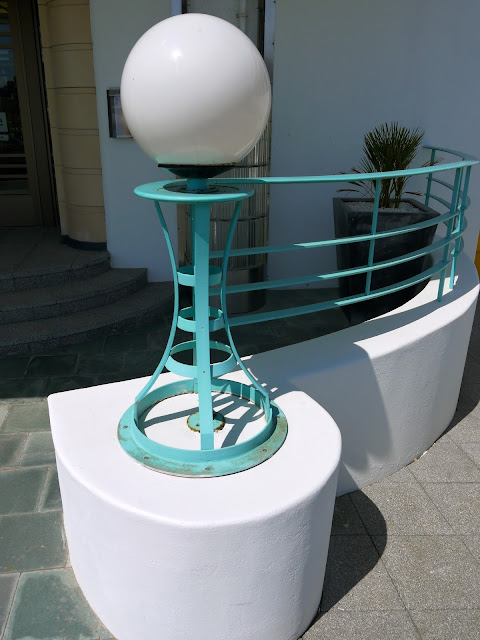 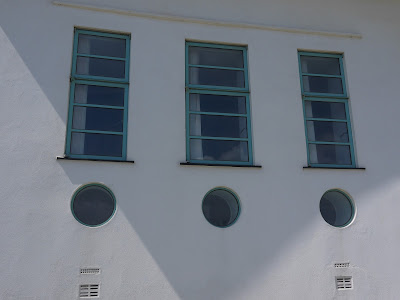 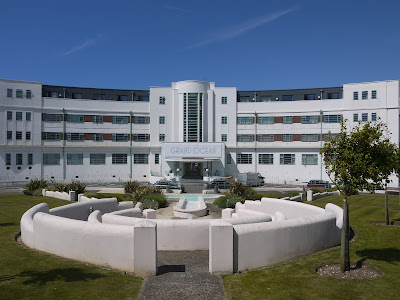 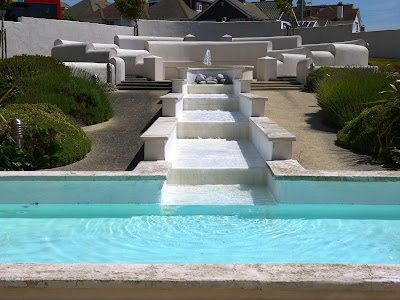 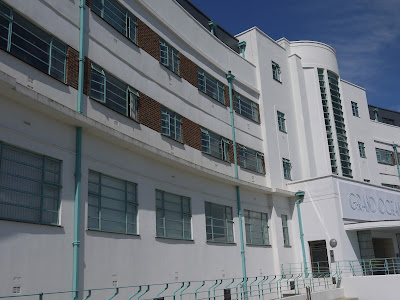 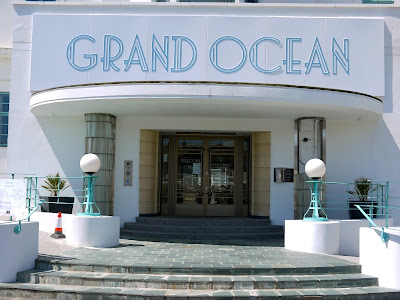