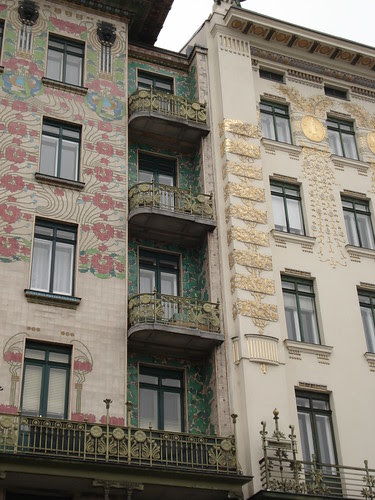 This time next week, I will be in Vienna for the first time since 2006. Looking through some old photographs as part of my preparation for the visit, I came across this one from last time.

Numbers 38 and 40 Linke Wienzeile, better known as the Majolica House, and pictured above, are probably my favourite art nouveau buildings in Vienna and are the work of the architect Otto Wagner. Born in Penzing, now part of Greater Vienna, in 1841, he was responsible for many of Vienna's iconic buildings as well as, rather interestingly, the Rumbach synagogue in Budapest. He was also a founder member of the enormously influential Vienna Secession together with Gustav Klimt, Koloman Moser, Joseph Hoffman and others.

Wagner took both contracting and architectural responsibilities for this ensemble meaning he had almost total creative control and practically free reign to realise his vision. This included covering number 40 in   colourful stoneware tiles which led to the building acquiring its "Majolica House" nickname. It is the colours and floral designs that first strike the first time visitor, together with the gold plated relief medallions that decorate the facade of number 38. The medallions were designed by Koloman Moser. The photograph above centres on the small, rounded balconies where the two addresses link, the deep green "vegetation" on the tiles and the leaf motifs on the iron work must have been designed to give the resident a feeling of having their own garden!

The block became the epitome of modern city living not just because of the beautiful exterior, but because Wagner installed bathrooms and elevators and used a clever floor layout to configure space in an optimal way. The apartments also had uniformly designed basic furnishings - predating the more recent trend to this approach by a whole century! Critic and writer Ludwig Hevesi wrote "The interior furnishings of these houses, as a unified whole in the thoroughly modern form, at once aesthetic and practical, is really something epochal". It certainly was.

The block extends around the corner, taking in number 1 Kostlergasse and it is in this part of the building that Wagner established an apartment for himself. Described as a "night lodging" to differentiate from his real home in Huttledorf, it still boasted a bathroom, water-closet, kitchen, dining room and an ante-chamber, but lacked the salon and library of his other residences. But who needed extra rooms when the bathroom was a colossal 5.28 by 2.91 metres with a ceiling height of 3.6 metres. Not to mention the bath being made from glass with a nickel painted frame construction. The bath became so celebrated and well-known that it featured in an 1898 exhibition organised to celebrate Emperor Franz Josef having served fifty years on the throne.

The Majolica House is located directly opposite the wonderful Nachsmarkt and a short walk from the Secession and other important sites. There are many cafes close-by too - and we all know about Viennese patisserie...

More pictures of Vienna here and here.
UPDATE! For more on art nouveau in Vienna see here.
Posted by Yekkes at 16:20