I have already written about some of London's art deco treasures here and here, but there are many more gems from the deco and modernist period spread throughout our city. The deco style influenced the design  of residential, public, educational and retail buildings. This post has a look at examples from each of these functions.

Agatha Christie fans may find the building pictured below to be familiar. That's because it was used as the fictional home of Ms. Christie's detective Hercule Poirot in the TV series of his adventures. In real life, Florin Court is a private apartment block situated in a beautiful quiet square less than five minutes from the busy Barbican Underground station. Completed in 1936 and designed by architects Guy Morgan and Partners its most arresting feature is the undulating facade, which is a gift for photographers who can play with the "movement" of the building. I also like the recessed upper floors (there are nine floors and 120 flats in all) and the stylish main entrance with its deco features. A "deco style" swimming pool was added to the building for residents' use in 1980. There is also a small gym and a library. Unfortunately the original features in the lobby were tiled over some years ago. Time to take the tiles off?

Florin Court is located in Charterhouse Square, EC1. It is a beautiful, quiet London Square which is home to a number of older and interesting buildings as well as a private park restricted to residents of the square, who, according to the notice, can only take their dogs in "with permission". Quite right too. Residents, with or without dogs can stroll in this little park and admire its very beautiful cherry blossom - in full bloom when I passed yesterday. You can see more pictures of Florin Court here. 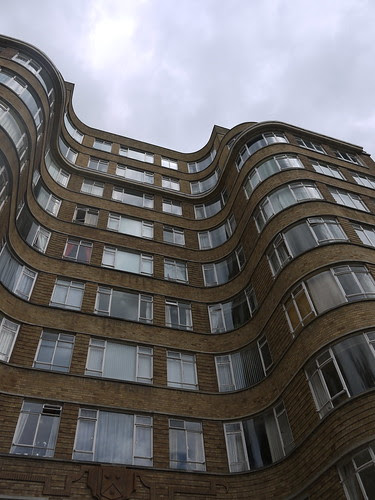 Diverting eastwards from Bloomsbury to Holborn, brings us to another great example of 1930's architecture - Summit House in Red Lion Square. The former home of the Austin Reed company, the house was built in 1925 and was the work of architects Joseph Emburton and Percy James Westwood. Emburton was responsible for several modernist/ art deco buildings including Simpson's Department Store on Piccadilly (now Waterstones).

Summit House (pictured below) is a six storeys, steel framed building clad in toffee coloured faience and which extends from Red Lion Square along Dane Street. It has recessed windows on each storey with black, metal frames. A low level wall at ground floor level shields the basement storey and includes decorative iron railings with a lotus leaf finial at the corners and on either side of the main entrance. The wooden doors have carved panels by sculptor and designer Percy Metcalfe. The House also has a blue plaque dedicated to John Harrison (1693 - 1776) who invented the marine chromometer which allowed ships to accurately calculate their longitude when at sea.

Today the House is home to internationally known lawyers Mishcon de Reya. Holborn has many other interesting sites. You can read more about them here. 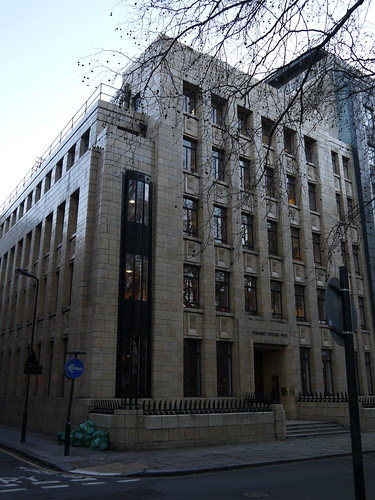 London boasts many art deco freezes and sculptures from the 1920's and 1930's. The once controversial Jacob Epstein sculptures at London Underground's Broadway House were mentioned in the first of this series of posts on art deco. Somewhat less controversial but also well known are "Tragedy and Comedy" by Alan Durst that grace the Gower Street entrance to the Royal Academy of Dramatic Art (RADA). Just a short step from another major art deco building - Senate House - these figures from 1933 can easily be added to a visit to see the the next building in this post - the former Daimler Garage, which is perhaps a ten minutes walk away. 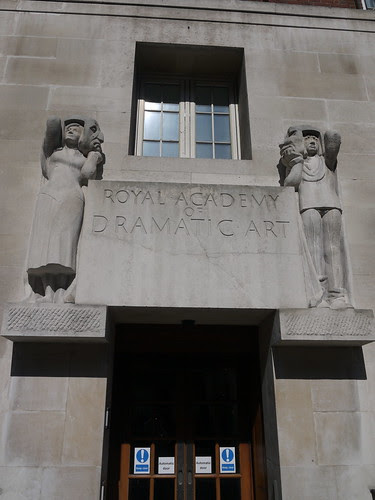 Hidden away from the main road, but in the heart of the west end, Herbrand Street's former Daimler Garage is one of London's hidden treasures. Designed by Wallis, Gilbert and Partners and completed in 1931 it is a precursor to their much larger (and in my opinion) masterpiece, the Hoover Building in west London. Originally the home of Daimler-owned cars in addition to up to 500 private vehicles, it has been tastefully refurbished as offices for the McCann-Erickson Company.  The exterior includes the  beautiful curved glass entrance lobby, the glazed stair well, the pristine white colour and several examples of the deco "rule of three" in terms of decoration. As well as being visually outstanding, the garage was also extremely modern in terms of its approach to service, making use of then cutting edge technology. It boasted an electronically operated pressure washing plant with a waiting room and an attendants office. Open House people - it would be great to get a look inside here some time!

There are other art deco or art deco influenced buildings very close to Herbrand Street. The huge apartment block, Russell Court is just around the corner in Woburn Place. It retains very stylish entrances and external metalwork in addition to its concave northern end which bears the legend "Woburn Place Car Park". There are also deco influences in one of the blocks on Coram Street, which you will have your back to if you are facing the old Daimler Garage. 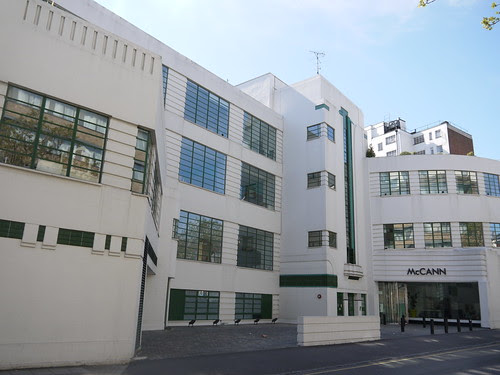 I am lucky enough to be able to see one of London's best remaining examples of art deco almost every day as St. Olaf House (pictured below) in Tooley Street, is just a short walk from my office. Beautiful as it is, it is quite easy to miss if approaching from London Bridge because of the road layout and also because the many tourists that throng this part of London visiting the wonderful Borough Market, Southwark Cathedral, Tower Bridge, Tate Modern and the many other attractions in the area rush by not noticing it tucked away in its corner. But it really is worth taking the time to spend a few minutes admiring this building.

Built of Portland stone, it is the rear entrance of the Thames-side Hay's Wharf Company built from 1928-1932 and designed by architects H.S. Goodhart-Rendel. Its distinctive features include the stylised signage, differently arranged windows on the side columns and a figure of St. Olave, King of Norway, produced by sculptor Frank Dobson. This is a reference to a church of the same name that once stood on this site. The House faces the River Thames and the water side has a series of Dobson designed panels that will the subject of a future post. Today the building houses London Bridge Private Hospital's consulting and administration rooms. 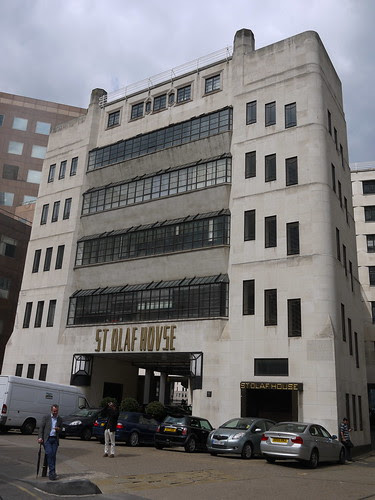 And finally to retail. T. Fox and Co. Limited at 118 London Wall, EC2 is a great example of an art deco designed shop which has retained most of its original features. Fox was an umbrella and walking stick manufacturers and although the business has now gone, the new owners "Author" have retained the streamlined frontage, merely adding their name to the facade. Built in around 1935, the facade is made of black vitrolite and was designed by the Pilkington Brothers. The original shopfitting was by Pollards. Very close to Moorgate station, it is dwarfed by the the more recent skyscraper buildings but still has a real presence due to its simple but timeless style.You can see the whole of the facade here.  Given that it is a short walk from nearby Florin Court, I wonder if Poirot bought his umbrellas and walking sticks here! 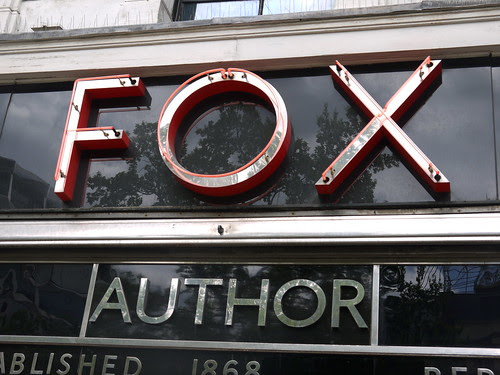