A Mumbai Icon And A Disappearing World 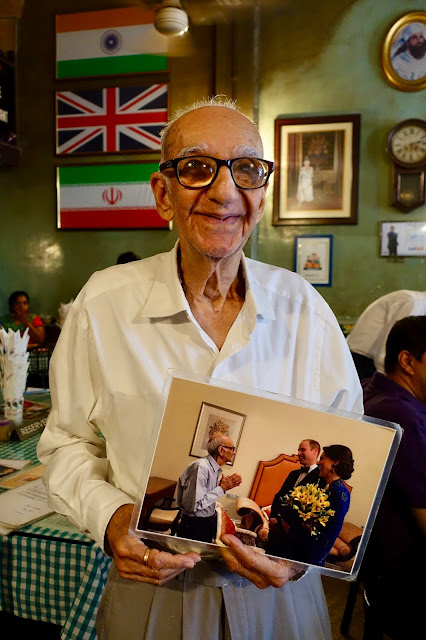 It is thought that the first Parsees came to India between the eighth and tenth centuries, fleeing persecution in what is now Iran. Together with the Iranis, they are one of two groups practising the Zoroastrian faith. They have been extremely successful in India, particularly during the period of British rule when several members of the community achieved positions of prominence including in science, industry and the military. In recent decades their numbers have declined due to emigration and an extremely low birth rate.  However, their presence is still felt through their historical achievements, the remaining Parsi temples and the work of internationally renowned writers including Rohinton Mistry, Thrity Umrigar and Bapsi Sidhwa. They are also known for their famous cuisine.

During the middle years of the 20th century, Mumbai was home to several hundred Parsee and Irani cafes serving authentic dishes including salti boti (mutton pieces cooked in a special gravy), fish patra, berry pulav and Parsee chapatis. Sadly, most have now disappeared, some have reinvented themselves as places to enjoy beer and snacks and a few have clung on to their roots. Café Britannia in the Fort neighbourhood falls into the latter category. Founded in 1923 by Rashid Kohinoor, a Zoroastrian immigrant from Iran, it was originally established to serve continental dishes to British officers during the colonial period. Rashid’s son, Boman eventually took over responsibility for the café and was an iconic presence there until his death in 2019 at the age of 97.

The name of the café was chosen because eating places needed to be licensed by the British and Rashid thought the name might encourage them to deal quickly and positively with the application. He was proved right and the café has been operating since then. Although not as elegant as it must once have been, it retains a certain charm with its peeling paint and beautiful bent wood chairs imported from Poland decades ago. Less charming although somehow endearing are the idiosyncratic rules and regulations displayed on the walls and on the menu. These include sensible stuff such as not allowing outside food to be brought in and a requirement to vacate seats as soon as you have paid to allow others to sit down. Others assume a more authoritarian tone. My favourite notice reads “Do not argue with the management”. I wish I’d thought of that when I worked with the public. It goes nicely with a favourite sign of mine seen in another Mumbai café that says “This place is for eating not meeting. Eat and go”. These notices can be found in most of Mumbai's Parsi and Irani cafes and as well as directing the behaviour of customers they have inspired at least one prominent Mumbai writer. The Bene Israel Jewish writer Nissim Ezekiel wrote the following after spending time in Bastani, another (now sadly closed) Irani cafe in south Mumbai.

Do not sit more

Do not write letter

Do not make mischief's in cabin

Our waiter is reporting

All are welcome whatever caste

If not satisfied tell us

I met Boman Kohinoor twice, the first time in 2017 when I enjoyed a plate of his famous vegetable biryani accompanied by a sweet lime soda. He took my order, asked me where I am from and said, “I’ll be back”. A few minutes later he returned to the table saying “I’m back” before proceeding to show me a number of laminated press cuttings picturing him with Prince William and Kate Middleton as well as other articles about the café. He was a devoted royalist and received extensive media coverage when he was invited to meet the royal couple when they visited the city. The invitation came following his making a video appeal explaining how thrilled he would be at the opportunity to meet them. He continued to come and go from my table to speak to other customers, always saying “I’ll be back” and “I’m back” at the appropriate point before telling me a little more or teasing me about where I come from. “So are you from England, Britain, Great Britain, the British Isles or the United Kingdom” he asked me. I told him “London” and he agreed that this was a good answer.

Before I left, he asked me for three favours. I was to ask the Queen to visit Mumbai, to kiss the children of William and Kate next time I saw them and to come back and eat there again. The first two were beyond my ability and at least one would probably have got me into serious trouble should I have tried to do it. However, I did manage to return and to enjoy his food a second time. I was also able to give him a large copy of the photograph I had taken of him, proudly holding the laminated news clipping featuring the picture of him with the royals. His death was a sad day for Mumbai and for India, the end of an era and the loss of one of the few remaining links with old Bombay.