The French Ambassador to Israel is a vary lucky man. He gets to live in one of the most beautiful modernist houses in the country. Tucked away in Jaffa's Ajami neighbourhood with stunning views of the Mediterranean from the roof terrace, spacious rooms, works of art on the walls and (of course) very tasteful furniture, the ambassador and his family live in a house with quite a story.

The story begins in 1934 during the period of the British Mandate in the unlikely setting of the Tel-Aviv Rotary Club. The club had a membership of one third Jews, one third Arabs and one third Britons. It was here that Muhammed Abdel al-Rahim one of Jaffa's wealthiest residents met Jewish architect Yitzhak Rapoport and impressed by his designs for the nearby Dajani Hospital, commissioned him to build a house in Jaffa. al-Rahim was a successful businessman and landowner and wanted to enjoy a home with modern facilities but which also maintained his religious and social traditions,  separating public and private spaces and with distinct quarters for men, women and children. In response, Rapoport designed an elegant Bauhaus exterior with an interior floor plan to fulfil his client's requirements. This included a mashrabiyya - a latticed screen to denote the boundary between the women's quarters and the rest of the building with another one inserted into a wall to enable the women to see into the more public areas without being observed.

The 1930's saw rapid development in Tel-Aviv and Jaffa with many homes and public buildings being constructed in the Bauhaus style. They also saw significant periods of unrest and growing tension between the different communities. The Arab riots of 1936 saw many people killed and Rapoport would no doubt have been nervous visiting the construction site in this largely Arab populated neighbourhood. He had developed a kind of friendship with al-Rahim through working with him on the commission and the architect was smuggled into the area in Arab dress and introduced to his client's other guests as a visitor from Kuwait.

Both men took risks in continuing to work together during this period but the risk was even greater than we might imagine. al-Rahim was an Arab nationalist and treasurer of the group carrying out attacks on Jewish residents, whilst Rapoport was working as a spy for the Haganah and used his visits to Jaffa to inform on the overheard plans and discussions of the Arab group. Their relationship continued with al-Rahim going on to commission Rapaport to design a flour mill for him. The same flour mill became a strategic post for Jaffa's Arabs during the 1948 war and the architect was able to use his knowledge of the building to advise on how to topple it.

There are different versions of what happened to al-Rahim after the 1948 War. Some say he left for Lebanon in 1948, others that he lived on in the house for a year before leaving. Either way, astonishingly he signed the house over to Rapoport in order to protect his asset. Rapoport is known to have asked him why he didn't hand it to his own relatives and was told that he was more trustworthy. The architect resisted attempts to nationalise the property before selling it to the French for their first embassy in Israel in 1949 before traveling to Naples to hand the money to his friend and political rival. Doubt has been placed on this story, but the French confirm it and it a bill of sale for £20,000 for the property sits in the Tel Aviv municipal land registry. Over time the two men lost contact. al-Rahim died in Lebanon in the 1960's whilst Rapoport lived on until 1989.

Yesterday I was lucky enough to be able to see inside the house as it was open to the public as part of Tel Aviv's Houses From Within programme - similar to London's Open House. Groups of about 20 people were led on thirty minutes tours of several of the ground floor rooms and the lower terrace. My Hebrew is not good enough to have fully understood the guide's commentary but I was able to enjoy touring the reception rooms, high ceilings,  the dining room hidden behind a glass wall that doubles as a door and the classic glazed stairwell and lines and angles of Rapoport's exterior. There is also a wooden door that folds like an accordion. But the real show stopper is the fantastic art deco staircase with its smooth marble steps and wall panel and its ornate metal railings. Unfortunately the tour did not include the chance to climb those stairs but what a privilege to be able to see and photograph them!

The connection with the Rapoport family continues as the architect's son, Oded followed the family trade and became an architect and has worked on minor renovations in the house at the Embassy's request. 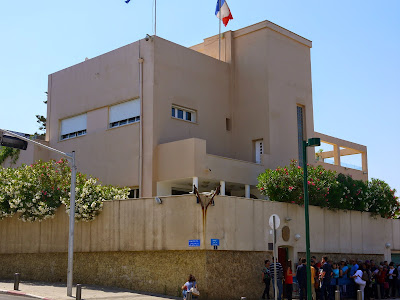 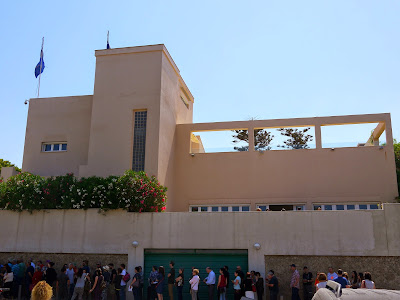 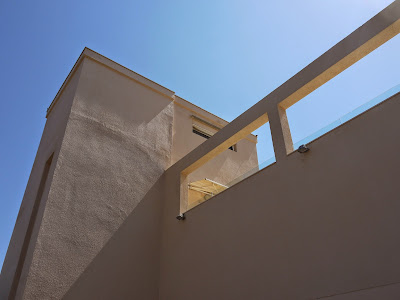 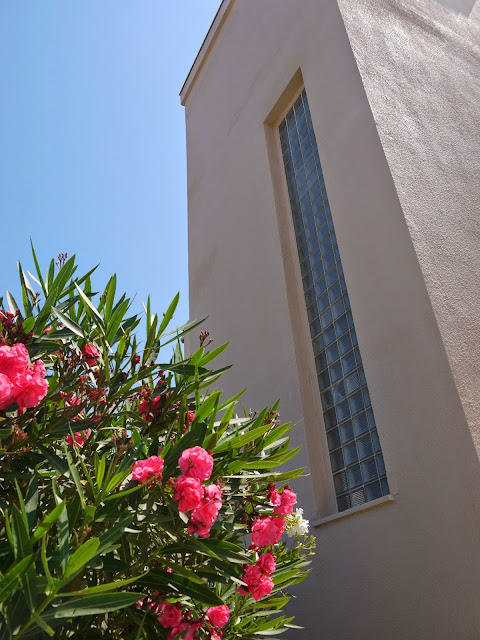