The Koli people are an ethnic group native to Maharashtra, Rajasthan, Gujarat and a number of other Indian states. Perhaps the longest continuous inhabitants of Mumbai they were there when the city was a collection of islands but became increasingly marginalised during the colonial period and were pushed out of areas that became prime real estate.  There is a strong matriarchal dimension to Koli society. The women have traditionally been very powerful and hold a dominant position in domestic and business matters. Most Kolis are Hindus but in Mumbai a significant number are Catholics descended from people converted by the Portuguese in the 16th century. Historically the Kolis have dominated fishing,  the men going to sea and the women selling the catch.

I had two encounters with the Koli people during my recent stay in Mumbai, both organised through the No Foot Prints company. The first was at 5.30 a.m. at the Sassoon Docks where hundreds of Koli women come to select fish from the previous night's catch, to barter for it at a fast and furious auction and to take it away either for re-sale or in response to orders placed by regular customers. The Koli women are renowned for their honesty and if they feel the fish is not of an appropriate standard they will tell their customers that they cannot fill their order, preferring to offer an alternative catch. Early morning at Sassoon Docks is not for the feint hearted. It can be a real scrum but it is fascinating to see the fish being unloaded, passed from boat to boat and then to the dock without labelling or documentation, yet everyone knows who each catch belongs to. Do not go there expecting social interaction. The women are completely focused on getting the fish they came for, at the best price and then whisked away as soon as possible. This is how they earn their living and they have only a few hours in which to get this done.


My second meeting with the Koli people was very different. I spent a morning in Worli Village, home to a large Koli community and where I was made to feel very welcome. The village has a market selling fish (of course) and other foodstuffs, several small food and tea shops, general stores, temples, churches and almost everything needed for everyday life. Some of the children go to school outside but others are educated in the village. There is even a gym here - established by one of the local men in the long neglected fort, now tidied up and used as an important local facility.

The vendors who are almost entirely female prefer not to buy their fish from Sassoon as they say it is too far to go and instead rely on more local sources. Worli market is a world away from the business carried out at Sassoon Docks and the women were happy to stop, chat a little and even to be photographed. Whilst most of them sell fish and sea food there are a number of fruit and vegetable stalls right beside them. This is not normal practice in India as vegetarians would not normally buy their food from stalls that neighbour those selling meat or fish but for the Kolis fish is the staple diet and things are different here. Stalls are allocated by a market committee and are acquired on a rental basis. The market was relatively quiet when I visited with just a few shoppers and several cats waiting patiently to be offered treats from the women.

As I strolled along the main street several people called out hello, good morning and where are you from? - phrases that travellers hear a lot in India and which are indicative of the general friendliness of the people. When I stopped to buy chai at a teashop one of the younger members of staff exchanged a few words of English with me, asking about my work and family. One of his work mates called out to me to say something in Hindi. I have perhaps 20 words of Hindi that I can use confidently and know the meaning of but I wanted to do something more impressive. I decided to give them the words of one of my favourite vintage Bollywood songs. And to their surprise I said (not sang - a step too far even for me) Sar jo tera chakraye, ya dil dooba jaaye, aaja pyaare, paas hamare, kaahe ghabraye, kaahe ghabraye. Now I don't know the exact meaning of this wonderful tune from the film Pyaasa, performed by the inimitable Mohammed Rafi, but I know it's a song about head massage releaving all of one's troubles. For a few seconds there was a stunned silence, then mild applause and laughter and a request to hear it again. I duly complied and then moved on with an unwarranted sense of achievement.

A little further on Ram Shantaram was sitting on his front step, seemingly lost in thought. An elderly man, he wore a crisp cream-coloured shirt and had an interesting face, clearly a handsome man in his youth. I asked him for a picture. He agreed readily  and went on to say that his wife had died recently, that he was alone and that life was not good without company. Whilst he was speaking another elderly man came along, unsteady on his feet he joked that he is an engine that no longer works properly. So unsteady was he in fact that after holding on to my hand for a few minutes he was helped home by Adi, my guide who returned with chai for Mr. Shantaram and we stopped to chat a little more before moving on. I have become increasingly interested in older people in the last few years, perhaps because of growing older myself. I am frequently struck by the loneliness of some of these people, despite their being surrounded by strong communities. And yet other elderly people in the village seemed happy, content and confident like the two women pictured below who sat talking underneath their drying laundry.


Of course there are also many young people in the village. Still on the main street I noticed a little boy and girl - sister and brother I presumed, standing beside each other on a step a few feet from their grandmother. Whilst she did not wish to have her picture taken she did not object to my photographing the children. By the time I turned back the boy had gone but the little girl remained standing there looking out as if to say where has he gone now. A bit like a mother looking for her children. Earlier, at the temple, I met a delightful family originally from Mumbai but now living in Ahmedabad. They had travelled all the way from their adopted home the night before, a train journey of about seven hours.,The came to visit the Koli temple and planned to return the same day. Seeing my camera, they asked me to take a group photo for them. I was happy to comply and have since sent it to Adi for forwarding via WhatsApp. I hope they like it.

The family and some more images from Worli Village. 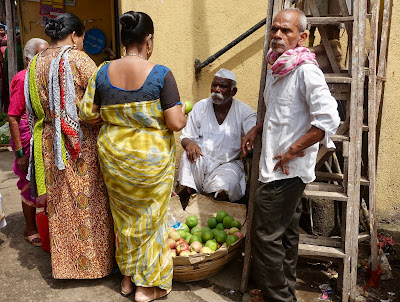 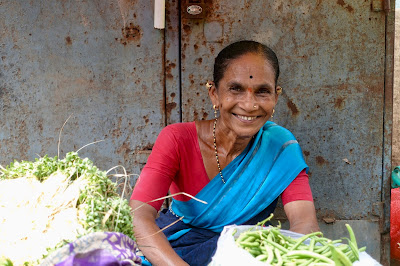 You might also like A Postcard From India -2, The People of Spice Alley, Mumbai's Lalbaug Market or Scenes From The City of Joy 2 - Pay Me In Dollars I Want To Buy A House

My visit to Worli Village was faciliated by No Foot Prints who offer a series of walks in Mumbai designed to show visitors the less well known side of the city.
Posted by Yekkes at 18:50