A Postcard from India 2 - The People of Spice Alley, Mumbai's Lalbaug Market

Mumbai's Lalbaug neighbourhood was once home to several mills employing many workers in a range of industries. Today, the mills are gone and many of the chawls, communal housing built to house workers who moved to the city are being demolished and replaced with expensive high rise apartment buildings. However, some of Lalbaug's more interesting characteristics have survived, including the wonderful market with its spice alley of shops and stalls selling every spice you could ever want.

I visited Lalbaug in the afternoon after the main business of the day was concluded. Most of the  stalls were still open although one or two of the owners were napping on sofas or mats set out in the shops. I normally enjoy watching the drama of busy markets, watching people haggle about the price, choose and reject items or stand and gossip with the shop keepers and each other. However, visiting during the quiet time brings other delights - the possibility of more time to talk to the merchants and to walk freely without struggling through the crowds. 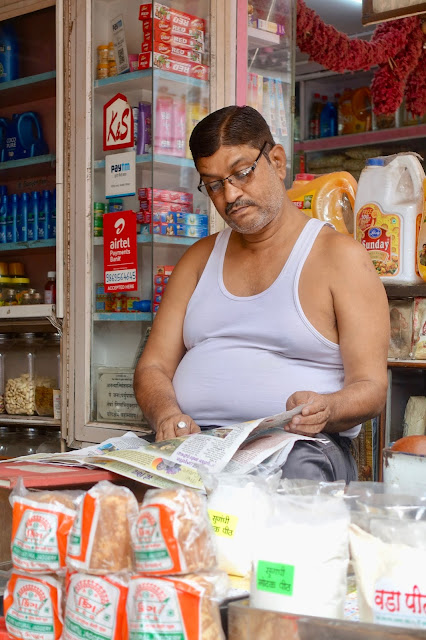 Strolling along the alley, you can see chillies being prepared for sale, with the non-usable parts being stripped away from the red or green fruit. This is done by hand. It is hard work and can result in painful burns if not done carefully. Most of this work is done by women who sit at the front of the stalls where the chillies will later be offered for sale. Once the customers have bought their spices, they take them to one of the small businesses at the rear of the market for mixing and grinding. I saw a young man heating a huge cooking pot before adding chillies and other spices under the watchful eye of the gentleman who had just bought them, stirring and folding them in the fierce heat.

In this part of the market, there is a constant loud, industrial, pounding noise as the cooked and mixed spices are then ground by young men operating powerful machinery. This results in spectacular red, yellow and other coloured ground spices ready for use in Mumbai's kitchens. The smell is intoxicating. 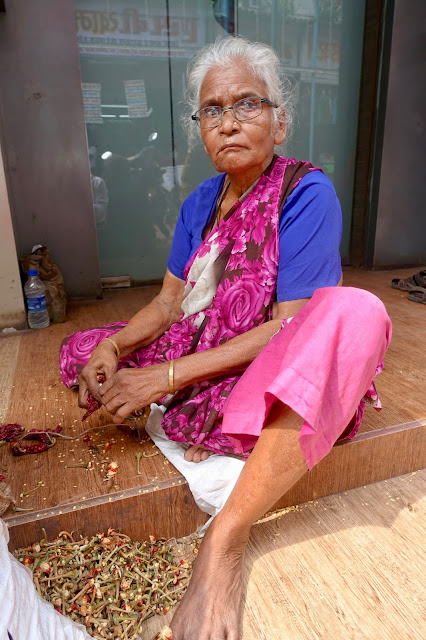 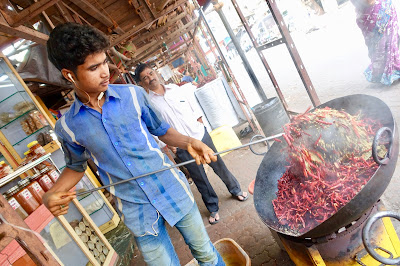 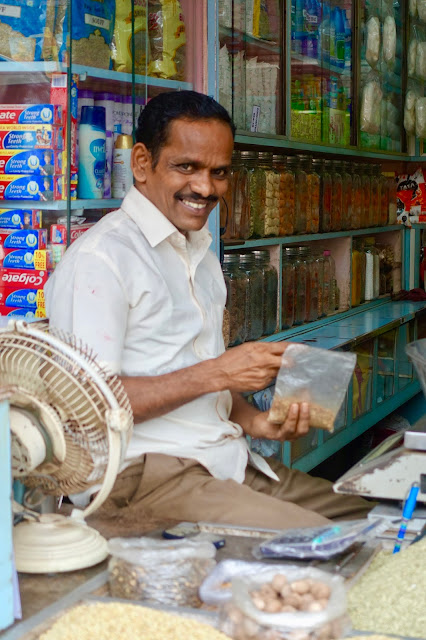 As with other markets, Lalbaug offers many opportunities for candid photography. The content looking  vested man sitting in the front of his store reading the newspaper made me think of a character from a Narayan novel whilst the man with the small general store noticed me taking his picture and responded with what must be the biggest smile in the market. Of course sometimes I ask for permission before clicking as I did with the lady separating the parts of the chillies. She gave her permission with a smile but then assumed a very serious pose for the camera before laughing when I showed her the result.

Lalbaug also has a fish market which begins early in the morning and was practically concluded at the time of my visit. A number of cats were prowling the fish section, looking for any leftover treats. I noticed what might be the smallest kitten in the world, asleep beside a discarded chappel which might just have been a little bit bigger than the cat. Whilst looking at the kitten a man seated on a stone bench pointed out other kittens, took one on his lap and smiled into the camera.

Just across from the man with the kitten a woman was frying fish, liberally adding spices no doubt obtained from the alley. Not only did she say hello she also offered me some of her cooking. Sadly I had to decline. Disappointed at first, she understood when I explained my vegetarian leanings. She explained that she was not selling cooked food but was preparing a dish for her helpers now that the day's work was completed. An older man in a yellow and purple bandana sat beside her, grinding garlic and onion with a wooden mallet. When he saw me photographing his boss he moved towards me and positioned himself for a picture too. 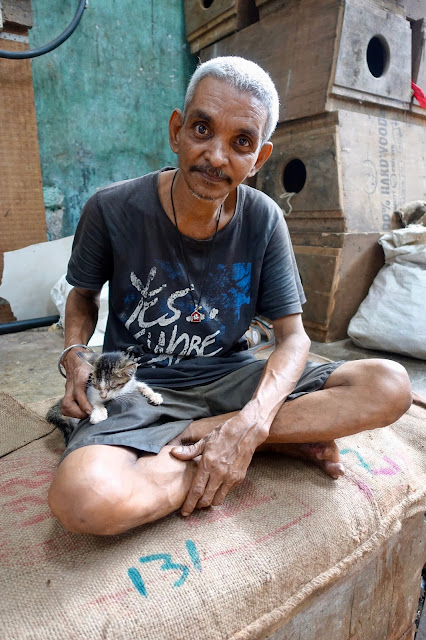 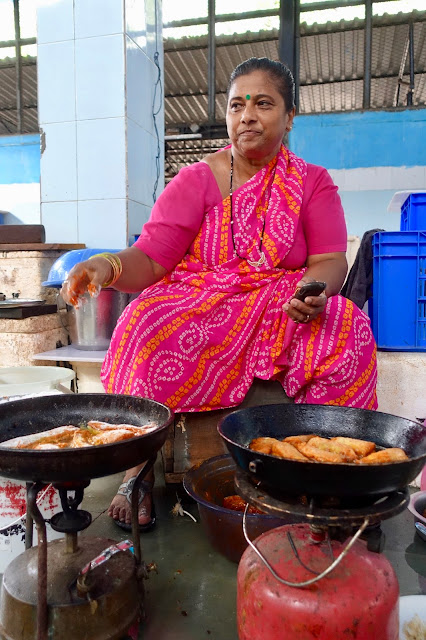 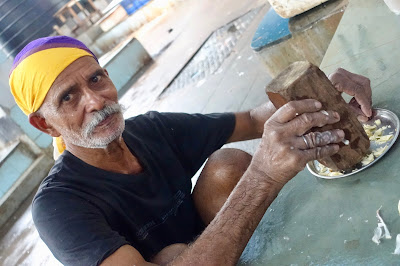 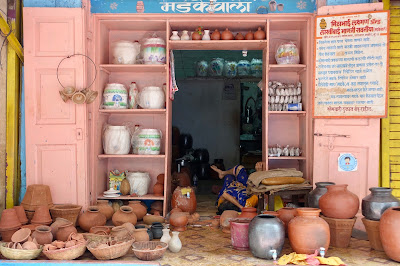 Despite its name, the alley offers more for sale than spices. You can pick up your supply of paan - a combination of betel leaf and areca nut combined with herbs, spices and sometimes tobacco and then chewed and either spat out or swallowed. It is widely used in Asia although it can be injurious to health depending on the level of use and on what is included in the mixture. Other shops offer earthenware jugs for keeping liquids cool during the summer or grinding of wheat to make flour. Everything is laid out to attract the attention of shoppers. They goods are fresh and of high quality and the alley is clean unlike many similar markets across the world.

The spice market at Lalbaug is something to treasure in a city that is rapidly changing. Let's hope the creeping gentrification of the area does not impact adversely on this wonderful slice of old Mumbai. 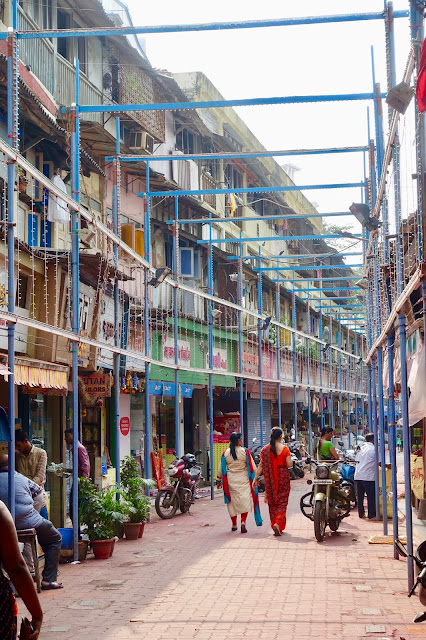 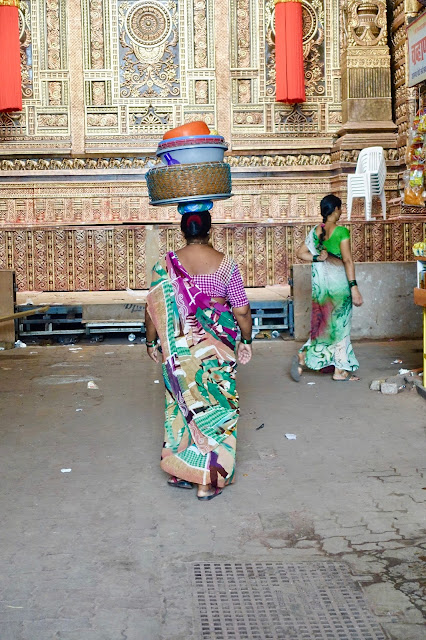 You can see more pictures from Mumbai here.
Posted by Yekkes at 18:53