On March 11th I was walking the streets of Mea Shearim in Jerusalem, camera in hand, witnessing its Ultra Orthodox community celebrating Purim. A lot has happened since then and life has changed so much that rather than a few short weeks it seems like months ago. Two days later as the situation rapidly deteriorated with more and more cases of the coronavirus being reported and restrictions on movement and travel beginning to be implemented, I cut my trip short and came home. I had planned to write about my time in Mea Shearim soon after my return but I fell ill with the virus and was unable to do anything much for a couple of weeks. I am much better now and bit by bit am able to resume my normal activities. 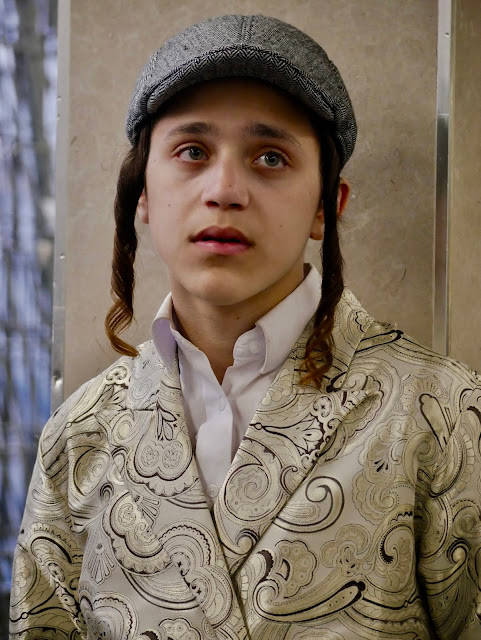 Mea Shearim is one of the oldest Jewish neighbourhoods outside the walls of the old city of Jerusalem. The name literally translates as one hundred gates but can also be understood as one hundred fold. Founded in 1874 it was funded through a partnership of 100 share holders who purchased land outside the old city in order to escape the poor sanitation and to live in a healthier environment. The contractors for the project were Yosef Rivlin a prominent member of the Jewish community who worked with a Christian Arab to construct a courtyard neighbourhood surrounded by a wall, the gates of which were locked every evening. 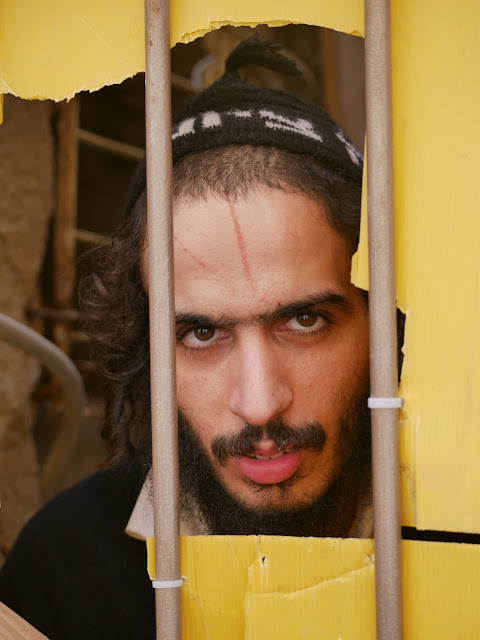 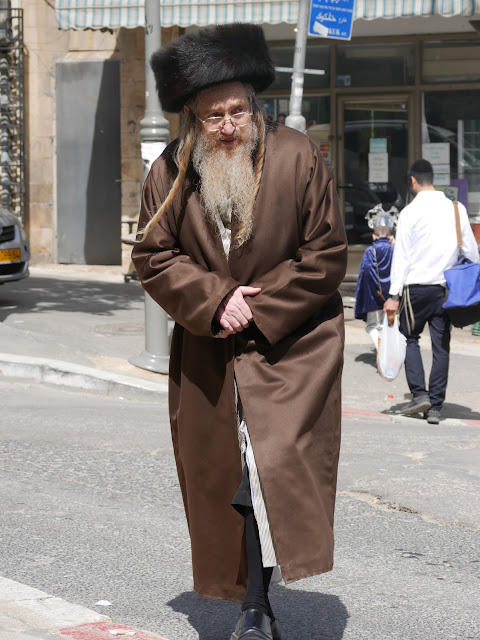 Today the area is populated almost exclusively by different groups of Haredi, ultra-Orthodox Jews who strictly maintain religious laws, wear modest clothing and generally live separately from the the rest of society. This separation includes rejecting many aspects of modernity, including as a rule, photography. However on certain occasions it is possible to enter the neighbourhood to respectfully and discretely take pictures. However to is not acceptable to take portraits without permission and if people signal that they do not wish to be photographed it is my strong advice to respect that.

Purim is one of Judaism's happier festivals, celebrating the survival of the Jews in ancient Persia and the foiling of a plan to exterminate them. It is celebrated rigorously, almost riotously in  Mea Shearim. Many people take part in the tradition of wearing a disguise or costume, the many yeshivas (schools focusing on the study of religious texts) hold mass celebratory events in the presence of important rabbis and some of the men of this normally sober community indulge heavily in the consumption of alcohol. 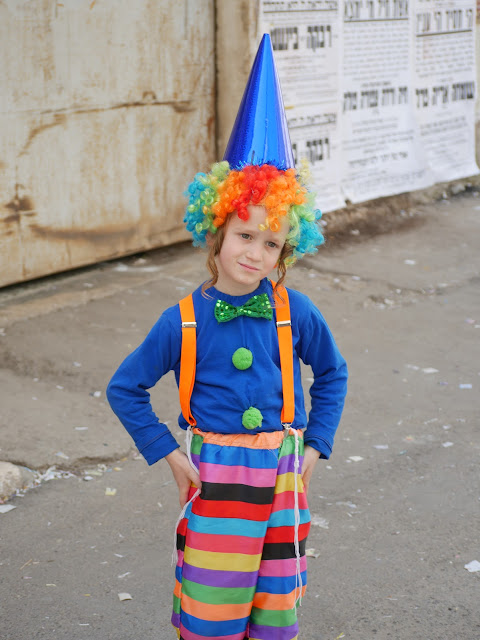 As I walked the streets of the neighbourhood with a photographer friend we met with a variety of responses. Some people hurried away or covered their faces when they saw the cameras. One or two called al tetzalem b'mea Shearim - do not take pictures in Mea Shearim, whilst others were curious, wanted to talk a little and in some cases were happy for a portrait to be taken. Most interesting were some of the children who having seen us, would approach, not speaking but inviting us to admire their costumes and to photograph them by standing and posing in front of us, such as the boy in the clown suit pictured above. 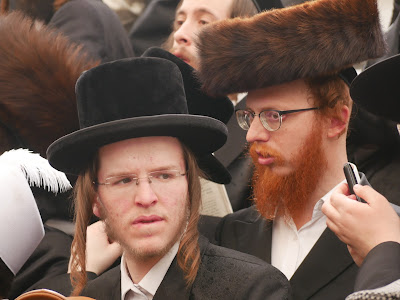 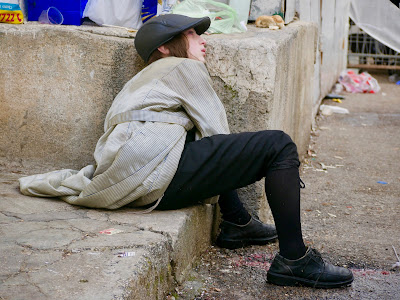 Perhaps the highlight of my time in Mea Shearim was spending an hour in a particular yeshiva where hundreds of Haredi men stood swaying, chanting and singing in the open air on bleacher style seating whilst the rabbis sat at an elevated table observing the proceedings. The singing could be heard several streets away, strong, loud and beautiful. Arriving in the grounds of the yeshiva I first entered a refectory where food and copious amounts of wine were laid out on a series of tables. Several of the men looked the worse for wear including boys perhaps as young as ten or eleven, some of them collapsed on the floor whilst others had over indulged so much that they were physically ill in the courtyard. One or two became very loud from the alcohol, dancing, falling and in some cases collapsing. In the midst of this I noticed a young man wearing an immaculate kaftan (coat) and cap who had perhaps the saddest eyes I have ever seen. Standing alone he seemed preoccupied and apart from the others. He is pictured at the top of this post.

Back in the streets we came across family groups on their way to visit relatives, the children all wearing costumes. Looking up we noticed many small children playing on balconies and watching the activity below with much interest. We also met Shmuel aged 12 who was looking after a bakery but was happy to pose for us. I asked him if the bakery belonged to his father. He said it didn't and that he didn't want to say who owned it. The residents of Mea Shearim are often suspicious of outsiders which probably explains his answer. 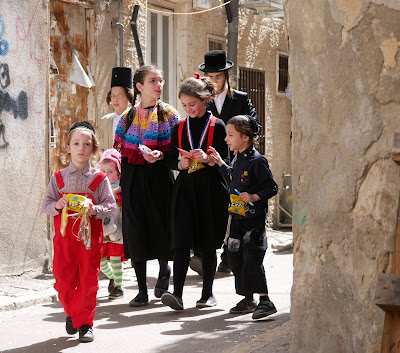 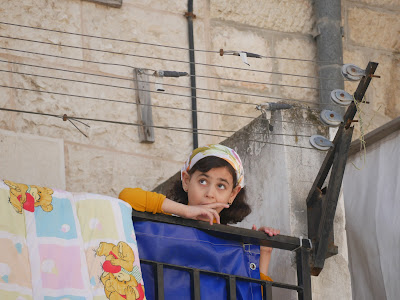 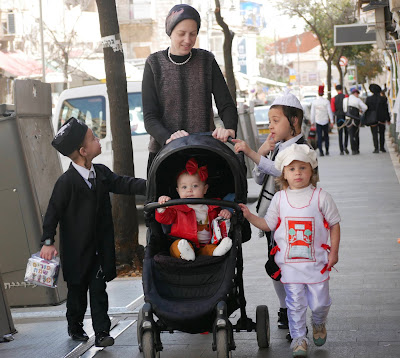 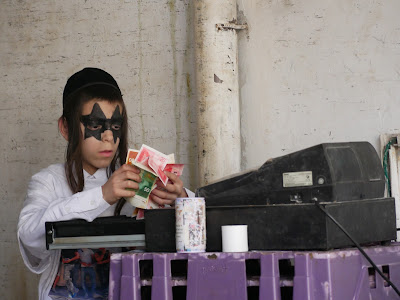