Postcards From My Hometown - 1, The Beach, Redcar

When I travel I still like to send postcards. I know this is considered terribly old fashioned especially when Facebook, Instagram, WhatsApp and a host of other platforms offer the opportunity to immediately send a virtual postcard to scores of people. I also enjoy sharing news and pictures online but still think there's something special about receiving a hand written postcard addressed to me personally. 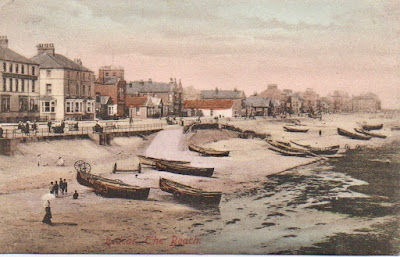 However sending postcards from abroad can sometimes be a challenge. A few years ago I bought some beautiful cards in Guatemala but then found that the country had suspended its postal service so I couldn't send them. I eventually posted them from Costa Rica where I had a short stopover on the way home. It felt a bit like cheating. On my first visit to the Philippines in 2016 I purchased some postcards in Vigan, a beautiful historic city and a World Heritage Site. I took them to the post office where I was greeted with a smile and the confusion as the staff explained that it was so long since anyone had sent postcards that they no longer had details of what to charge me. They very politely  told me that "everyone sends pictures home on their phone these days sir," before a nominal charge was decided and the cards handed over.

I should explain that I don't send hundreds of cards but always try to find one for my elderly relatives, my grand daughters and one or two friends in different countries who I think will appreciate receiving them. I know my aunt has a collection of every card I have ever sent her and when my dad was alive he carefully steamed off the stamps so that he could add them to his collection. Speaking of collections I must admit that I have hundreds of postcards that I've bought at exhibitions, markets and even online. They cover a wide range of subjects - vintage advertising, Art Deco and art nouveau architecture, souvenirs from places I visited years ago and lots of those cards that art galleries sell to generate a little income. What do I do with them? They are useful research tools and sometimes come in useful for blogging but for the most part I keep them in boxes under my sofa and look at them perhaps once in a few years. Still,  I am loathe to be parted from them.

I recently bought some vintage cards from the Saltburn Frame Company, a great little gallery and framing shop inside Saltburn Station. All of them are historical views of my home town, Redcar. The first, at the top of this post is a beautiful image of fishing boats on the beach during low tide and of very stylish people strolling along the promenade or standing on the beach. The women wear long heavy skirts, the men are sporting boaters and even the boys wear caps. The woman with the white parasol standing on the beach and looking out to sea is especially elegant. Today the sea front is   quite run down but the image here shows that this was not always the case. The Royal Hotel, on the left hand side of the picture was once owned by the parents of actress June Laverick closed several years ago and has been converted into flats.

The rear of the card identifies this image as one of the famous Frith's series. Francis Frith was a pioneering photographer, born in Chesterfield, Derbyshire in 1822. He was a man of many talents. He became a founding member of the Liverpool Photography Society in 1853 (established just 14 years after the invention of the art), ran a major publishing business and was also the owner of a successful grocery store. Frith was prolific, producing not only a photographic record of Britain but also travelling extensively, practising his art in Egypt, Ethiopia, Lebanon and Syria. He died in 1898 and his photographic publishing company was taken over by his son and later by his grandson.  According to online data the picture at the top of this post, number 47993 was taken in 1901 so can't have been his own work. The postmark shows the card to have been sent at 5.30pm on July 20th but the year is not legible. The stamp bears an image of King George V whose reign ran from 1910 to 1936 but of course these stamps would have remained in circulation for some time after his death.

The card was sent to a woman called Hilda who lived not very far from Redcar in Linthorpe Road, Middlesbrough. The writing is difficult to read, even with the help of a magnifying glass, but the sender reports that it is a lovely day, very hot albeit a little cloudy and that they had been outside from 10 am until 12.45. Unfortunately his or her name is illegible but the message reminds me of the things my relatives wrote on cards sent from Torquay and Bournemouth whilst I was growing up.

Look out for more postcards from Redcar coming soon!
Posted by Yekkes at 10:06