Postcards From My Hometown - 2, The Bathing Pool

I was born and spent the first 20 years of my life in Redcar. I have fond memories of spending time in the area known as the Coatham Enclosure with its indoor swimming baths, boating lake and amusement arcade which included a large fairground ride known locally as the "mad mouse". These were the remnants of a much larger range of facilities constructed in the late 1920's when a major building programme funded by the local authority provided work for men made jobless after the General Strike of 1926. There were no state funded benefits at that time and rather than have families seek relief from the Guardians of the Poor Law, the Council established construction jobs with wages funded through the rates. 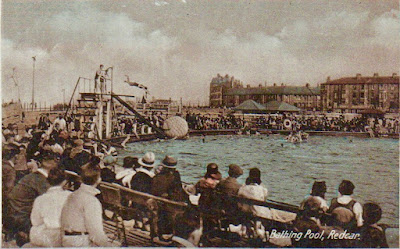 The original complex included an outdoor swimming facility called the Bathing Pool. It is astonishing to think that during the 1930's, Redcar's residents and visitors could benefit from three swimming pools. As well as the indoor baths, demolished in 1978, there were two outdoor facilities - a large one for adults and confident swimmers and a smaller, rectangular pool for children and learners. A small charge was levied, 4d for adults and 2d for children, whilst towels and swimwear could be hired at a small cost. Both pools were eventually closed. An outdoor roller skating rink was built over the larger one whilst the smaller one was built over to provide a car park for the indoor pool. I have vague memories of the closed skating rink and of trying to see over the surrounding wall with friends. This too is long gone.

The postcard featured in this piece shows an image of the Bathing Pool including swimmers, spectators and a daring diver launching himself from the highboard. When I bought the card my first thoughts were that this was an image of the Boating Lake due to the impressive buildings of Newcomen Terrace that can be seen in the background. However, a little online research and help from my brother soon uncovered the story of the long lost Bathing Pool. The site is now occupied by a youth facility know as The Hub. Whilst researching for this post I came across a couple of short films of Redcar in the 1930's the first of which includes some footage of a beauty contest at the Bathing Pool. You can see them here.

The card is post marked 8th July 1943 and was posted during the Second World War.  It was sent by one Nora to a Miss Jean Horn in Guildford, Surrey. Nora has written a chatty message saying she is on a course which apparently was "terribly stiff and means working all the time, night and day". She asks to be remembered to some friends and is anxious to make it clear that the picture on the card is from before the war "so don't think it is lovely here". She notes her temporary address on the card which suggests that Nora was in Redcar was connected to the R.A.F. so she may have served in the armed forces.

As with the card in my previous post, this one was purchased from the wonderful Saltburn Framing Company, located in Saltburn Station. More postcards coming soon.