A Postcard From India 5 - A Morning in Old Delhi 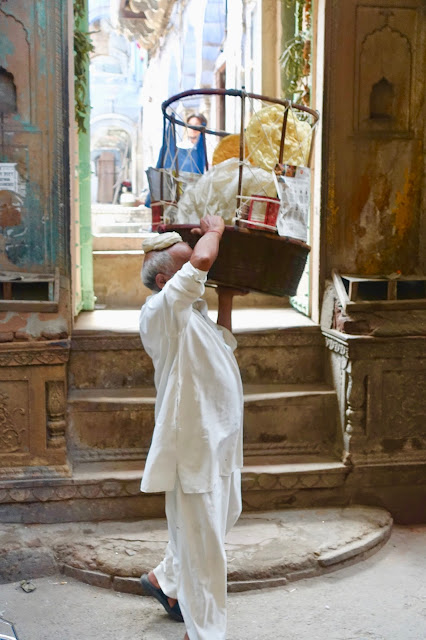 Old Delhi. Narrow streets. Very narrow streets, heaving with people, rickshaws, motorcycles, wheelbarrows, cows and donkeys. Noisy. Dirty. Magnificent. Off every narrow street there are several even narrower alleys. At first they seem a little dark and forbidding but inside many of them lie treasures - 18th century havelis, Jain temples, the best chaiwallah or snack seller in Delhi or someone who wants to tell you a story.

One man with a story is Mister Ramesh, owner of the New Gramophone House shop on the main Chandni Chowk Road. His family established the business in Lahore in 1930 but moved to Delhi in 1947 during partition when their home city became part of Pakistan. Old fashioned gramophone players are sold on the ground floor whilst the tiny first floor room is packed with vinyl records from days gone by.

I went there to look for some favourite Bollywood songs from the 1950's and early 1960's. He had them all. Very formal at first, once he realised that I was genuinely interested, he warmed up, drinks were sent for and he explained that after several hard years, business is showing sings of improvement. This is due in part to the efforts of several older Bollywood stars who no longer receive royalties from their films but can receive payments from sales of the soundtracks. He was very proud of his collection saying "If you can't find what you want here, you won't find it anywhere". I did find what I wanted and left with copies of the soundtracks of Pyaasa and Mr and Mrs 55 as well as a recording of some of Geeta Dutt's most famous songs.

Moving away into the lanes, the atmosphere changes. The streets are still crowded and it can be difficult to pass through them but perseverance brings rewards. Everywhere there is colour from the piled-up goods, window displays and the blue, pink, green and yellow painted walls that form the backdrop to street stalls. Even a humble banana stall can be a thing of beauty with the bright yellow of the fruit contrasting with the pale pink wall and the brightly coloured packets of snacks hanging behind. Taking a rickshaw ride though the lanes of Old Delhi is a great way to see all of this as well as to experience the friendliness of the people.  Expect lots of waving and shouts of "hello". One family squeezed onto a scooter looked up at my rickshaw and called out "good morning sir have a nice day" as they passed by. And speaking of rickshaws, look out for groups of school children piled onto them at various times of day as they go to and from school.


The shady lanes or "galis" leading from the old city's main arteries conceal some of its best kept secrets such as Haveli Khazanchi. Despite its terrible condition, this haveli (mansion), tucked away in the tiny Gali Khazanchi remains an impressive site. Once home to the Mughal Emperor's accountants, known as khazanchis, its central courtyard once boasted a marble pool. This is now drained but still overlooked by a series of beautiful balconies. Influential people including members of the royal family would have been received in the courtyard whilst accountants worked in the surrounding ground floor rooms. Today the haveli is crumbling but still striking due to its blue painted courtyard. One descendant of the khazanchis is said to still live in one of the ground floor apartments whilst others have been rented out, evidence of this being the several lines of washing on display!

The entrance to the haveli is through two huge carved wooden doors, left open to the street. On the morning of my visit, the bright Delhi sunlight spilled through the door, casting pools of light into the dark alley to reveal two figures - a young man using a mobile phone in the courtyard itself and a street trader crouched in the alley, preparing his huge basket of poppadoms before hoisting it onto his head and moving on to begin the day's business. Old and New Delhi together.

Nau Ghara is another small lane in the old city, leading off Kinari Bazaar Road. It contains nine beautifully maintained havelis (Nad Ghara means nine homes) all belonging to Jain traders and merchants. The Jains are a religious minority, whose beliefs include non-violence, non-absolutism and non-attachment to worldly goods. They were originally invited to Delhi by the Mughals due to being known for their enterprise skills.

The homes in Nau Ghara feature traditional latticed balconies, marble staircases and imposing wooden doorways. The entrances are painted pink, blue and yellow and have  beautifully decorated surrounds featuring flowers and fruits in the Persian style. The three-storeyed Jewellers Temple stands at the end of the lane. It is perhaps the most beautiful of all the buildings in Nad Ghara, its walls covered in gold filigree and murals showing life in the Mughal courts as well as scenes from various scriptures. Photography is not permitted inside the temple. This and a list of other rules is handed by the caretaker to visitors for reading before they enter. The list is laminated and framed and includes instructions about smoking and removal of shoes as well as the forbidding of photography. Despite this, he was extremely friendly and wanted to chat about where I was from and what I was doing in India as well as telling me that he has a friend who lives near Queen Elizabeth!

The desire to chat politely with visitors was something I experienced throughout India in huge cities and in small villages where I stopped for tea en route to somewhere else. Some of the artisans and traders in Old Delhi were also keen to chat and to talk about their work. This included a pair of silversmiths working in one of the alleys adjacent to an excellent chaiwallah's stand where I enjoyed masala chai and a savoury snack whilst admiring their work. These craftsmen were proud of their skills, happy to be photographed and in return expected only my interest and response. It really is worth taking the time to stop and chat for a few minutes and to see something outside of our normal experience. For example, one trader removes the tiny coloured glass pieces sewn into clothes as decoration and uses them to make jewellery and other items. People sell their old clothes to him to make a little money and he in turn recycles the glass to earn his own living.

Nau Ghara is not the only Jain enclave within the old city. Noticing an open doorway leading into a tiled courtyard I was curious about what might be inside. Venturing in I entered an open courtyard surrounded by several three floors of apartments probably dating from the 19th century. The central courtyard was a shared area and the building was managed by a superintendent who kept a room on the ground floor from where he watched comings and goings. A list of rules for residents was displayed in the corridor leading to the courtyard including exhortations about paying the rent and not being noisy. Not much different to being at home then. Although not as grand as Nau Ghara, the courtyard was decorated with beautiful  ceramic tiles, imported from Europe according to contemporary tastes at the time of construction. The superintendent told me that there was a restaurant on the roof and to go and have a look. On reaching the summit, I was welcomed by a group of young people preparing lunch according to Jain requirements which are not only vegetarian, but also forbid the consuming of garlic, onions, potatoes and eggplants.


It would be very easy to spend several days wandering through the lanes and bazaars of Old Delhi, enjoying the contrast between the bustle of the main streets and the tranquility of the lanes. The pictures below contrast those two extremes. I left the old city greedy for more. I will have to return. 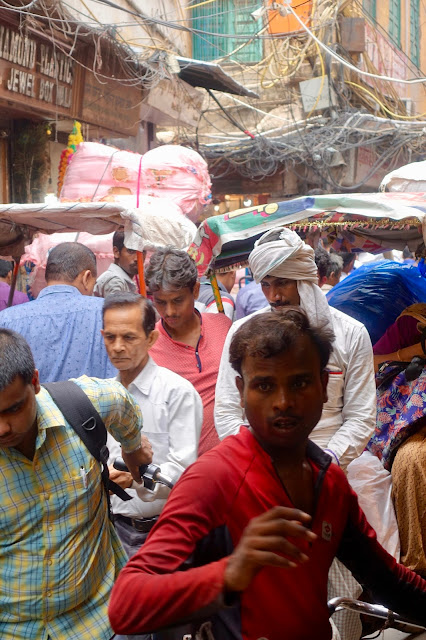 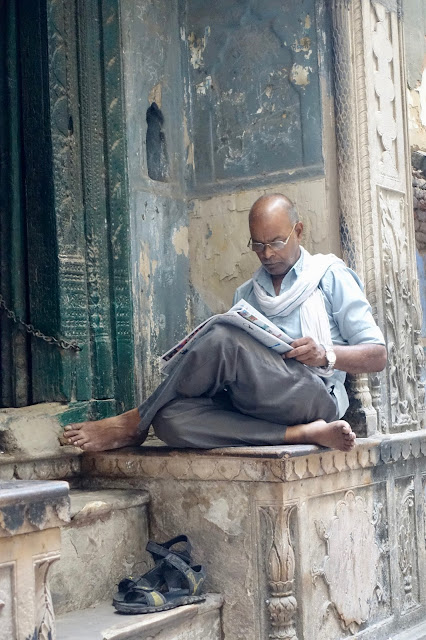 You can see more pictures from India here
Posted by Yekkes at 12:10