Trujillo is Peru's second largest city with just under one million people living in the metropolitan area. It is home to some spectacular pre-Inca archaeological sites, colourful colonial architecture, a couple of excellent museums and an enormous wholesale market. This post showcases some of the wonderful people who work in the market and whom I had the pleasure of meeting and photographing during my recent visit.


I have already written about some of the challenges of photographing people in Peru, but Trujillo was a very different experience to the rest of the country. People were more open to being photographed and not one person required payment. I must note that I had the superb assistance of a wonderful guide, Tali, who helped ease the way with the merchants, chatting with them a little about their stalls, families and experience before checking that they were OK with the camera. Thanks to Tali, the couple of hours I spent at the market were amongst the most enjoyable of my entire trip.

And so to the market. The first thing that struck me was its size. Gigantic. Tali promised me half a kilometre of bananas and another of potatoes and she did not exaggerate. The choice is wide and the competition is fierce as restaurant and shop owners come here to buy. Peruvians are rightly proud of their locally grown fruit and vegetables and like to tell visitors about the 4000 varieties of potato grown in the country. I think most of them were on offer here. 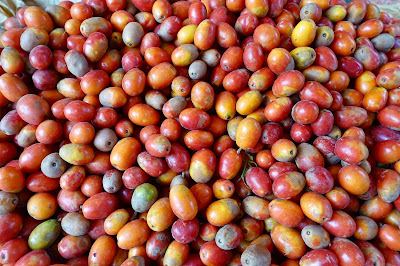 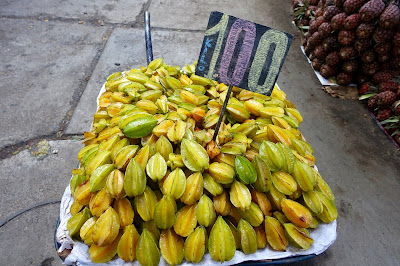 Of course, the colours, smells and scale of the market is impressive but it is the people that make it extra special. Wandering through the alleyways it quickly became obvious that there are many long established stalls here with several generations involved in different tasks from unloading to selling, and from sorting the stock to looking after children at the back of the stall.

Yolanda was one of the first stall holders I noticed.  Her sense of style stood out. She wore a leopard skin patterned ribbon in her straw hat and a long, buttoned cardigan. Simple garments but coupled with her posture and expression the effect was one of supreme elegance. Sitting beside  baskets of bright red, green and yellow peppers, she was serene, almost detached, indicating her agreement to a photograph with an almost imperceptible nod. She must be Trujillo's most stylish 65 year old.


Many of the vendors here are women, perhaps the majority. I have no doubt this is a tough job and some of the them can seem formidable at the first exchange. Initially, Gilberta was not keen to be photographed. She made faces and grumbled a little and I was resigned to moving on. But just as I was about turn away her demeanour changed and smoothing her floral blouse, she stood to attention and then to my surprise, began turning her head in different directions, acting the part of the model. What an actress! Perhaps she will like the picture I sent back for her.

I always think that selling must be like being on the stage and if Gilberta was a natural actress so was Maritza. She has an apple stall, was happy to be photographed and began playing up for the camera, taking an apple from her stall and saying "see this one? I grew it just for you".

The male vendors may not be foreword as Gilberta and Maritza but they also provided some interesting subjects. The butcher in the blue sweatshirt was peering between the cuts of meat hanging on his stall and smiling at passers-by. A little further along, another butcher's stall caught my attention, due mainly to the somewhat disturbing display of sheep's heads but also because of the mischievous smile of the stall holder. This part of the market was very noisy and when Tali asked his name, he misheard and assumed she had asked about the items for sale. "sheep's head" came the reply causing the surrounding stallholders to collapse into fits of laughter, unable to explain what they were laughing at for a moment. He eventually told us that he is called Juan, a name he shares with the butcher in blue and much more suited to him than the first response. Juan is a popular name amongst the male traders. The egg man's name is a little less common. He is called Napoleon.


If the majority of stallholders are women, delivery is a job done only by men. Although most goods arrive in the early morning, deliveries take place throughout the day. At the time of my visit, consignments of bananas were arriving. In some cases the fruit is sorted into containers in the back of a truck and then handed down to porters using trolleys. Others simply load huge piles of bananas on to their backs and take them to the stalls. One young man was carrying a huge pile of bananas and when I began to shoot, he put on a little show, performing a few dance steps before disappearing into the main body of the market. Still on the subject of bananas, in the afternoon things quieten down a little and the woman in the picture below made use of the time to practice her needle craft. 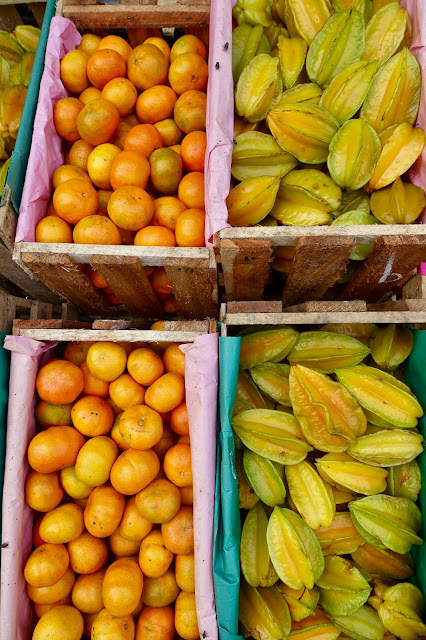 Luz and her grand daughter Damaris were playing happily together whilst other members of the family took care of their stall. As with Yolanda, I was much taken by Luz's sense of style. With her poncho of contrasting colours and wide brimmed hat, she was a match for any of those posh ladies out shopping in London's Knightsbridge or South Kensington. But little Damaris, aged just two stole the show with her pink kerchief, showing great curiosity and wanting to handle the camera. She looked most surprised when I showed her a picture of herself on its screen.

A little further on we came across Maria with her grand daughter Beatriz. As we passed, Maria looked up from grinding garlic and waved at us. Beatriz was standing close to her, a very serious little girl, also aged two. It is very easy to see Marie's love for her grand daughter from the scene below.  Such hope, such affection. When I showed her the pictures she became a little emotional to the point of shedding a tear or two. By now she should have a copy of the picture below. I hope she likes it.

As well as the established stall holders, the market attracts vendors who walk its alleys, offering sweet and savoury snacks to both stall holders and shoppers. Maria sells bags of popcorn from a tray. She stopped to watch our exchange with Gilberta and seemed very curious about what I was doing. She was less keen to be photographed herself, seeking reassurances that I wouldn't "steal her" with the camera. Before I had a chance to respond she seemed to have a change of heart and presented herself for a picture. When I showed her the result, she looked for a moment, nodded and went on her way.

Markets are generally very open places. Anyone can wander in and as long as they behave can stay as long as they like. You don't even have to buy anything. That must be what attracted the little group in my final people picture from Trujillo's wholesale market. I love this little scene, one fast asleep, the woman with her hat pulled down laughing a little, someone else intent on securing a parcel and the "character" engaging with the camera. I love Trujillo.

And to finish, a little more spice. 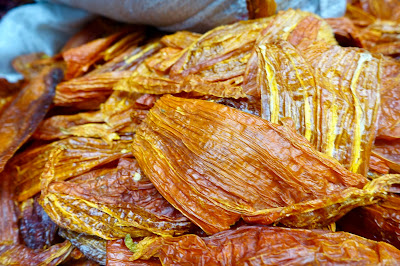 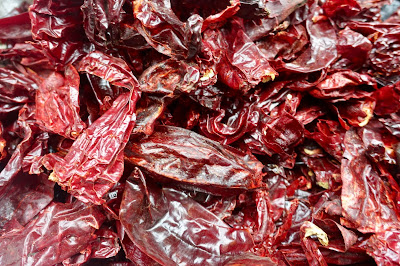 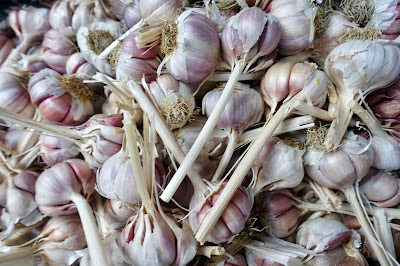 You can see more pictures of Peru here.
You might also like Peru - People and Portraits Part One or Lima Art Deco
Posted by Yekkes at 17:39