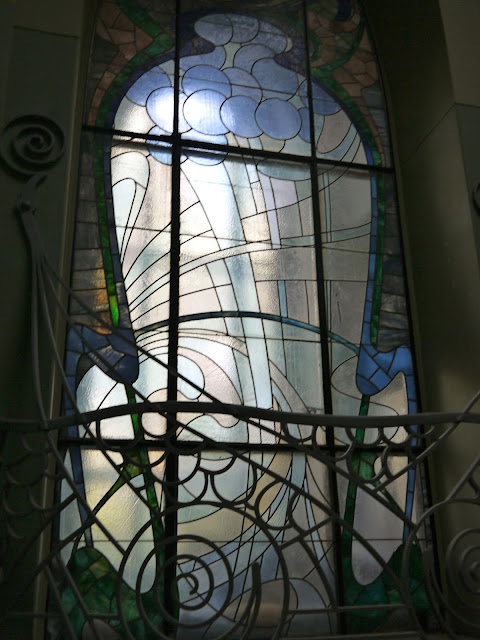 I have visited Moscow twice, first in 2008 and again, briefly in 2012 on the way home from Azerbaijan. It is a huge city with much to see but on both occasions I took the time to visit the Ryabushinsky Mansion on Ulitsa Malaya Nikitskaya, a sumptuous art nouveau building designed by Fyodor Shekhtel and completed in 1902. The former home of the Ryabushinsky family, it is now the Maxim Gorky House Museum but the building itself is the main attraction. In 2008, I found my way there by negotiating the Moscow Metro which is beautiful but difficult to manage. The names of stations are displayed only in Cyrillic and although the next station is announced it doesn't always sound the like the anglicised version of the Russian name that you might have memorised!

On arrival, I was handed a pair of over shoes to wear, to protect the wooden floors from damage, sold a ticket and then sold another ticket that enabled me to take photographs. The stern advice on not using a flash was for free as was the telling-off some visitors received for taking pictures without  a ticket. Quite right too but indicative of the then somewhat grim and Soviet style approach to "welcoming" tourists. However, once through the door to the main part of the building all of this was easily forgiven as the mansion's treasures revealed themselves. 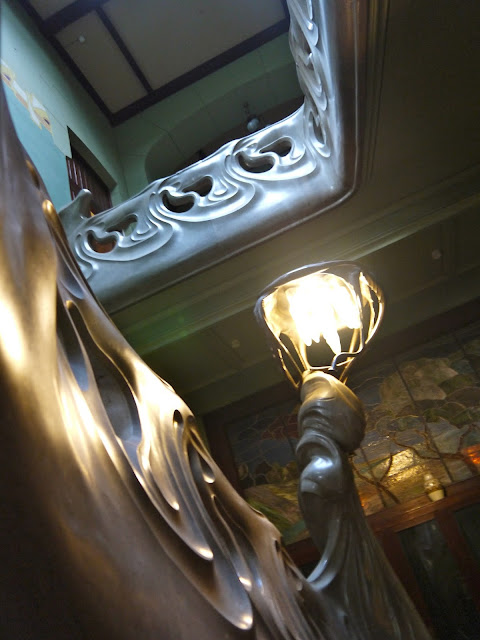 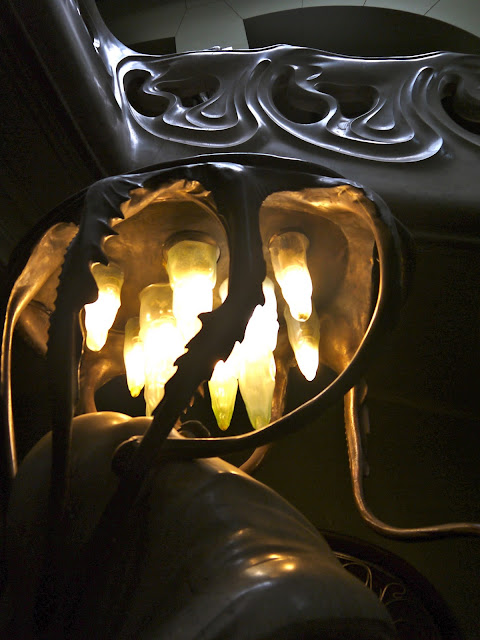 The house revolves around the centrally located staircase, constructed of Italian limestone which resembles marble but is warm when touched. The bannister is pierced at regular intervals with sculpted features resembling breaking waves. It is lit by a newel post lamp with bulbs that have been compared to stalactites, but for me resembled dripping candles as their light has a liquid appearance. The lamp adds atmosphere to the already dramatic staircase, leading visitors up through the building which is generally dimly lit in order to preserve the fabrics, paintings and colours of materials.

The staircase may be the main feature, but it is closely followed by the beautiful stained glass windows found throughout the building including the natural scene above the wooden panelling at the foot of the stairs and the large window at the landing with its translucent drops of water and fish scales. The rooms leading off the staircase are used to exhibit paintings, Gorky's library and original furnishings. It is difficult to take good photographs in the low light (at least I found this to be the case) but you can purchase a pamphlet from the reception desk that is well illustrated and tells  something of the house's history. 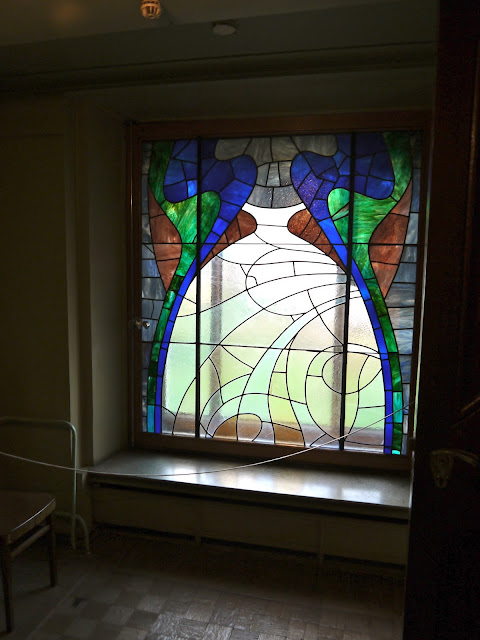 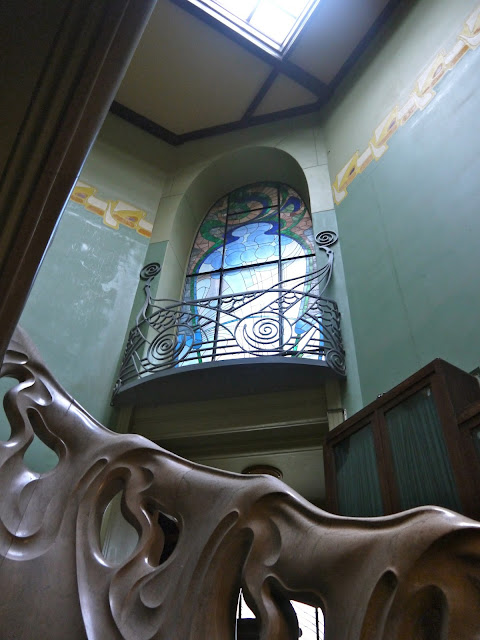 The Ryabushinsky family were members of a Christian sect known as the Old Believers, people who followed the Orthodox Christian faith prior to the reforms of 1652 and 1666. Subjected to persecution, they were forbidden to establish new places of worship and in 1856 their existing churches had their altars sealed. The laws were relaxed in 1905 under Tsar Nicholas II but the house was completed three years before that and so the family established a secret chapel at the very top of the mansion. This room was restored and re-opened before my second visit in 2012 and so I was able to see it. Richly decorated in orange, blue and other bright colours it reminded me a little of the more outrageous examples of Austrian Secessionism, including some of the works of Klimt. 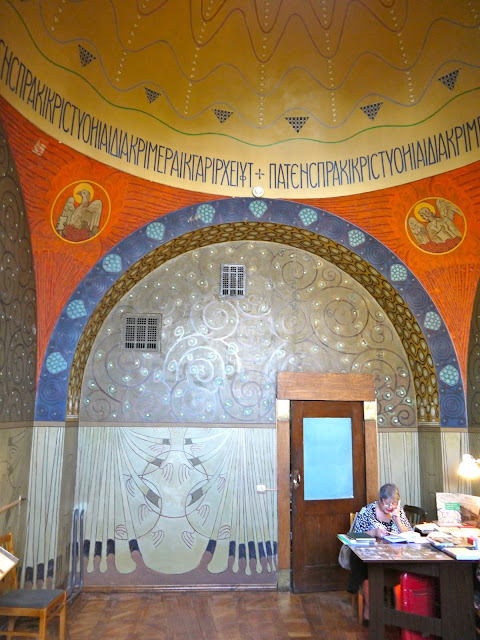 The family was prominent in banking, publishing, textiles and trade at the time the house was built, having started out three generations earlier as merchants. Nikolai Ryabushinsky was a Bohemian type, patronising contemporary art whilst his brother, Stepan although also interested in art was very religious and collected icons  and antique Russian needlework. In 1918, following the revolution, his collection was nationalised and is now part of the Tretyakov collection.

The family left Russia after the revolution and the house passed to the state who used it first as the visa section of the foreign ministry and later as the state publishing house. During this period, the poet Yesenin described it as "ultra-decadent". It then served a variety of educational and governmental purposes until 1931 when Gorky returned from self-imposed exile in Italy and took up residence. He also disliked the house describing it as "absurd". Clearly Gorky and Yesenin, although successful writers new little about architecture! Gorky died in 1936, possibly poisoned on Stalin's orders, but his grandchildren and daughter-in-law remained in the house until her death. Yesenin officially committed suicide, suffering from depression but there is also a theory that he too was killed by the Soviet secret police who then "staged" a suicide. Dangerous times.

The architect, Fyodor Shektel was born in 1859 in Saratov, a small town on the Volga. After his father's death, his mother worked as a housekeeper for Pavel Tretyakov, the art collector who noticed Shektel's talent for art and sponsored his studies at the Moscow School, of Painting, Sculpture and Architecture.  The young Shektel began his career as a graphic artist, illustrating children's books and then costumes and scenery for the Bolshoi Theatre prior to working in an architects office in the 1870's. His other works include the famous Morozov Mansion, the Moscow Art Theatre and the Yaroslavsky Rail Terminal all of which like the Ryabushinsky Mansion have survived until today.

Unlike its most famous resident and many of those who visited him, the Ryabushinsky Mansion came through the Soviet years with relatively little damage. Despite Gorky having carried out "improvements" that removed some original elements, it is one of the best and most complete examples of Russian art nouveau that remains. And the staff are friendlier these days. 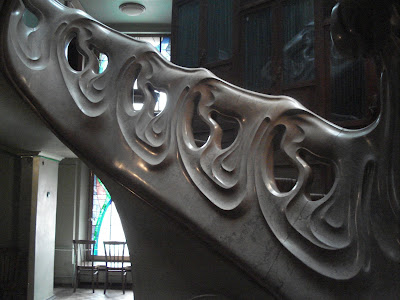 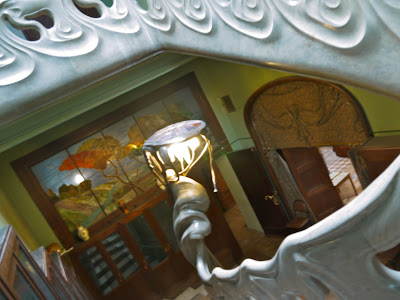 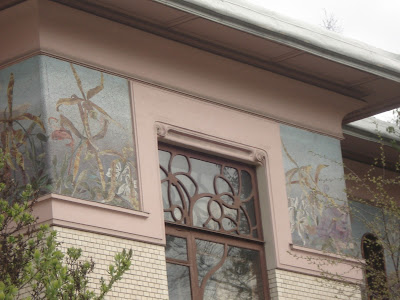