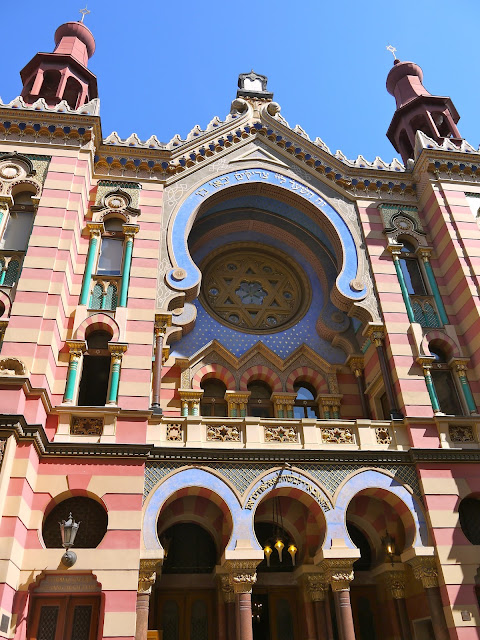 Jeruzalemska is a side street in Prague's Nove Mesto, or New Town. It is also home to the Jerusalem or Jubilee Synagogue which stands out from the rest of the street due to its vibrant blue, pink and yellow exterior and its Moorish architectural style.

I last stood outside this building more than 12 years ago, disappointed to find it closed and without signs of life. This was far from the case yesterday when I had to join a small queue of tourists wanting to enter and there was a steady flow of visitors whilst I was inside. However, I have to say that I didn't take much notice of the other visitors because once through the lobby where there is a small entrance fee, I was overwhelmed by the bright colours with deep reds, blues and yellows, even more vibrant than those on the exterior. Everywhere I looked there were flourishes, curves and geometric designs that surprise and delight. And this isn't just limited to the walls and ceilings - there are also beautiful stained glass windows, patterned ceramic tiles and bright coloured pillars supporting the organ.

Apart from the visual impact, the first thing to strike me was that it must have been a confident and optimistic Jewish community to have commissioned and built this synagogue at the beginning of the 20th century. The Society for the Construction of a New Temple was founded in 1898 following the demolition of the the Ziegner, Great Court and New synagogues as part of the clearance of the former Jewish quarter in Josefov. A site was acquired in 1899 and a series of designs considered including a Neo-Romanesque building designed by Alois Richter and Joseph Linhart's Neo-Gothic proposal.  The preferred Moorish design was that of Wilhelm Stiassny which was approved in 1904. He was responsible for over 180 buildings including synagogues in Malacky, Jablonec and Nisou and the Central Jewish Cemetery in Vienna. He was also the founder and president of the Society for the Preservation and Conservation of Jewish Art and Historical Monuments. 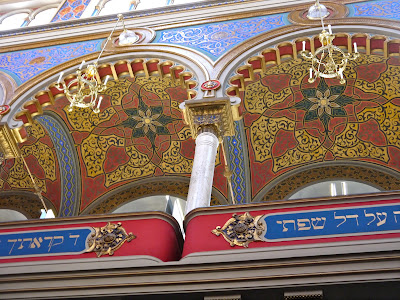 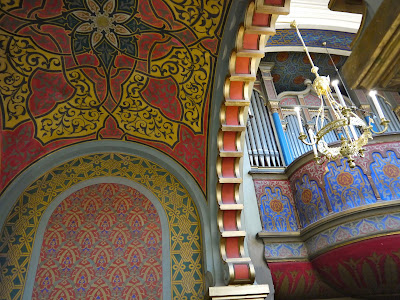 The building was realised by Alois Richter from 1905-6 at the Society's expense and the dedication took place on 16th September 1906 during the festival of Simchat Torah. It has a basilica type triple-nave with two traverse wings whilst the main facade has a large Islamic-style arch and a rosette window with a central Magen David. The window is surrounded with a Biblical quotation from the Book of Malachi "Have we not one father, did not one God create us?". Placing this quotation very prominently on the facade of a large and brightly coloured building may have been another sign of a confident community but could also have been a plea for acceptance for a community caught between competing Czech and German nationalisms. Furthermore the memory of the antisemitic violence of 1899 and 1900 following the Hilsner affair and the revival of the blood libel would still have been fresh.

The synagogue is filled with light filtered through beautiful stained glass windows whilst the aron ha-kodesh, where the Torah scrolls are kept, is decorated with a vine leaf motif and the tablets of the Ten Commandments. There is an organ at the upper level at the rear of the women's gallery. The inclusion of an organ was something that began in the nineteenth century and which provoked strong debate and objections with some Jews viewing this as the Christianisation of services. A rabbinical conference in Leipzig in 1869 considered this matter and afterwards organs were introduced in many synagogues in German speaking areas. 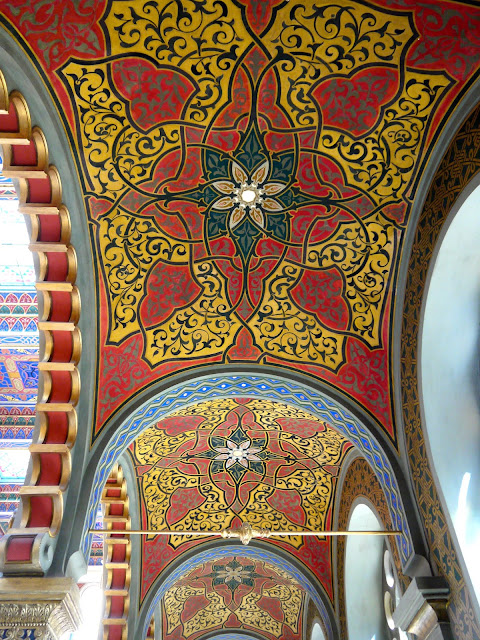 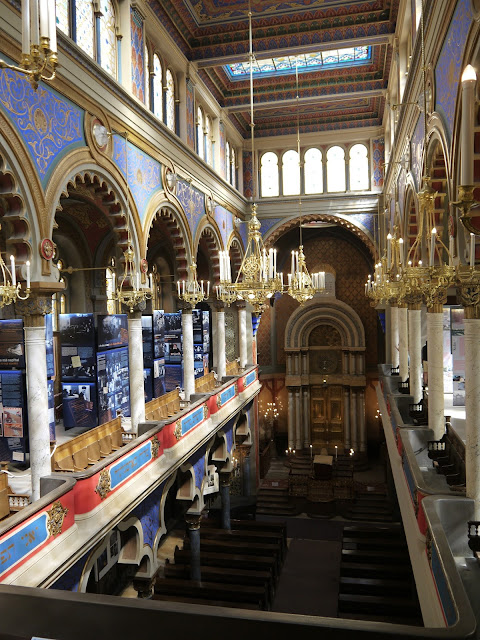 The synagogue survived the Second World War reasonably intact as it had been used as a store during the long occupation of Czechoslovakia. Most of the community did not survive the war and together with the restrictions placed on organised religion under the Communist authorities and regular  outbursts of star sponsored anti-semitism, there was little Jewish life until the fall of the regime in 1989. In 1992, the community began renovating the building, initially restoring the stained glass windows with funding from the Czech Government, Prague City Hall and from its own resources. Further restoration commenced on the interior walls and furnishings in 2004 and other works still continue.  Visitors are welcome during the summer and there are occasional concerts and exhibitions. The current exhibition focuses on the history of the Prague Jews.

It's taken me 12 years to come back to Prague to see inside this wonderful building. I won't leave it so long until the next time. 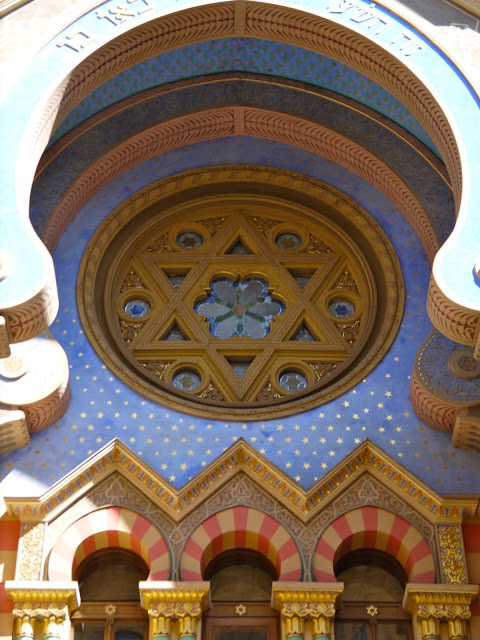 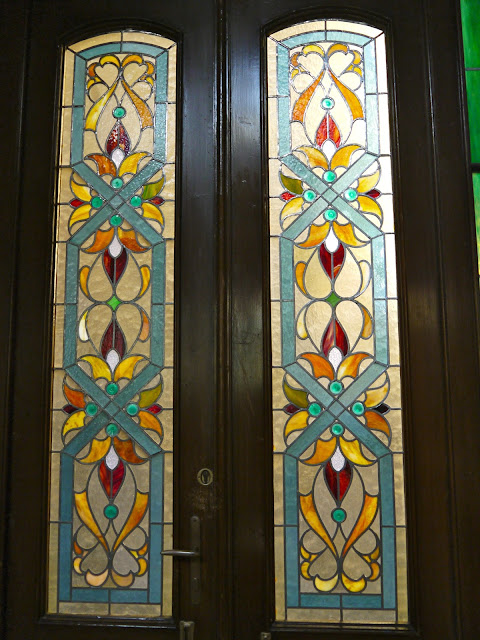 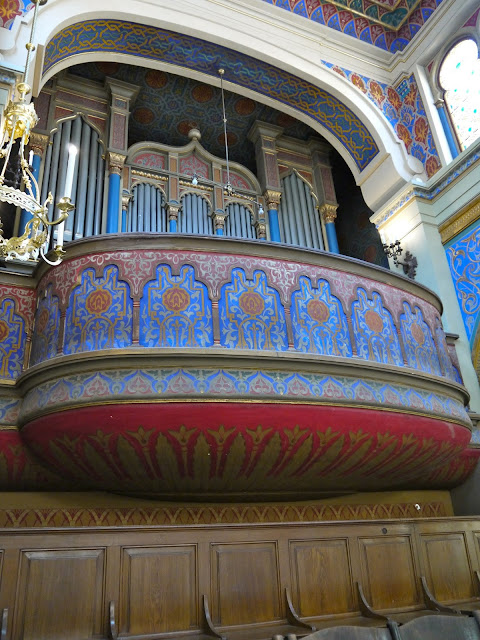