Calle Justo Sierra 71 - a synagogue comes back to life

One of the highlights of my first trip to Mexico City last year was a guided tour of the old city with Monica Unikel-Fasja, who pointed out places of Jewish interest and told me many stories from  the community's fascinating and sometimes difficult history. But Monica is much more than a excellent tour guide. She was responsible for ensuring the restoration of the beautiful Ashkenazi synagogue at Justo Sierra 71 in the heart of the city's Centro Historico.

She explained to me how this once thriving synagogue had gradually fallen into disuse as when members began to prosper they would move away to more affluent areas such as Condesa and Polanco. For some years, those who maintained businesses in the area continued to attend services but eventually this too ceased and for a long time the building was neglected, falling into disrepair. Monica, who understood the importance of building not just to the history of the community, but also to the Centro Historico told me about her having been part of a team that worked hard to restore the synagogue, by securing funds and appropriate expertise. After much hard work they succeeded in bringing it back into the beautiful condition it is in today.

No longer a place of worship, it operates as cultural centre, making a range of Jewish themed events and activities available to Mexicans (and visitors) of all religions and none, with a programme of music, talks, book launches and readings. This would be enough of an achievement for most people but Monica still has ambitions for the part of the building that formerly acted as the base of the organised Ashkenazi community. On my more recent visit, I caught up with her and she showed me around the large hall and office rooms that were once alive with the affairs of the community as well as for a time being home to a kosher restaurant. Her idea for the space was to have it used as an arts venue. This was quite an ambition - not only was the paint peeling and in some places the floor in poor condition but there was no electrical supply to the building. Sorting all of this out was going to be expensive and possibly more difficult to raise funds for than for the synagogue restoration.

Giving more thought to it, Monica decided to bring the space back into use by inviting emerging artists to work there, reasoning that the peeling paint and some of the other aesthetic challenges might not be so important to the artists. She was right. A number of artists have displayed their work in the space, primarily installations. The space is currently occupied by Estudio 71, a contemporary art project led by artist and curator Berta Kolteniuk who suggested that contemporary art would fit well here. Berta also works for the Universidad de Claustro de Sor Juana, as curator of Celda Contemporanea. But this is jumping ahead a little. Concerts have always been a success in the restored synagogue and Monica used music as a vehicle for bringing the old community building back into use. She approached maestro flautist Horacio Franco, asking him to give a concert in the building and to give the box office takings to cover the cost of restoring electricity to the building. Not only did he agree to do it, he did it in style, taking the audience on a journey through the building as he led them pied piper-like through its many rooms. The takings were enough to restore the electricity supply and the artists were able to move in.

Walking through the building during my visit I imagined the many people who must have passed through this place over the years - important figures in the community, new immigrants seeking help with work and housing and people looking for advice on all kinds of matters both secular and religious.  In its day it must have been quite grand, evidence of which includes the ornate metalwork on the staircase, the beautiful floor tiles (many of which remain) and some beautiful glass paned wooden doors. And in case anyone forgot that although the requirements of daily life were looked after in these rooms, a view of the synagogue from the landing windows was available to remind visitors that this was also a religious community.

So what's next? Monica would like to establish a museum about the Mexican Jewish community. Mexico City has a holocaust museum and memorial but lacks a museum of  Mexican Jewish life and achievement. Her ideas are in the early stage of development and she has no illusions about the size of the task but having restored the synagogue, brought the community hall back into use and written a couple of books, my money is on her to succeed. Perhaps on my next visit to Mexico City this new project will be beginning to take shape. I hope so.

And I can't resist including some more photographs of the restored synagogue. 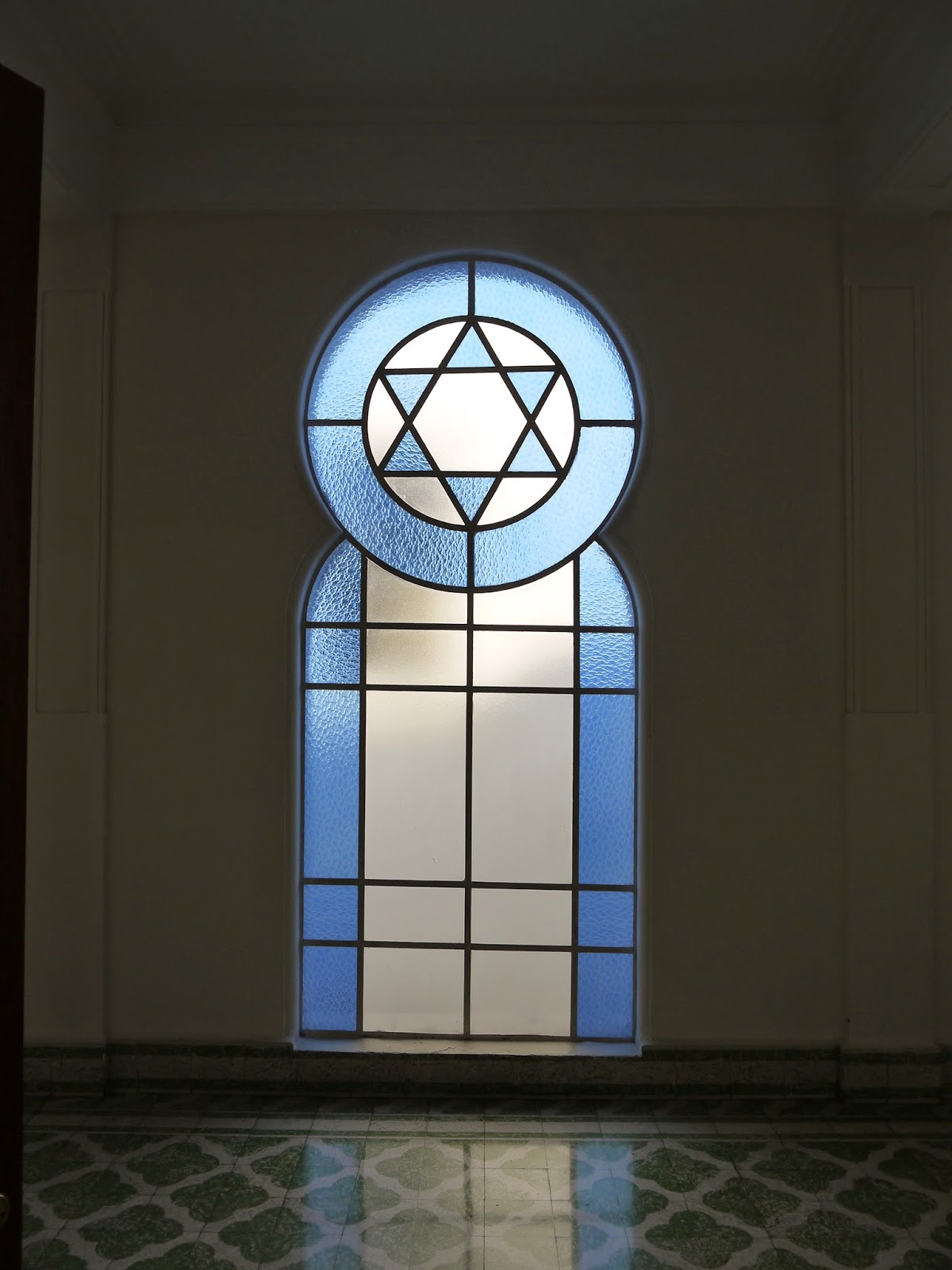 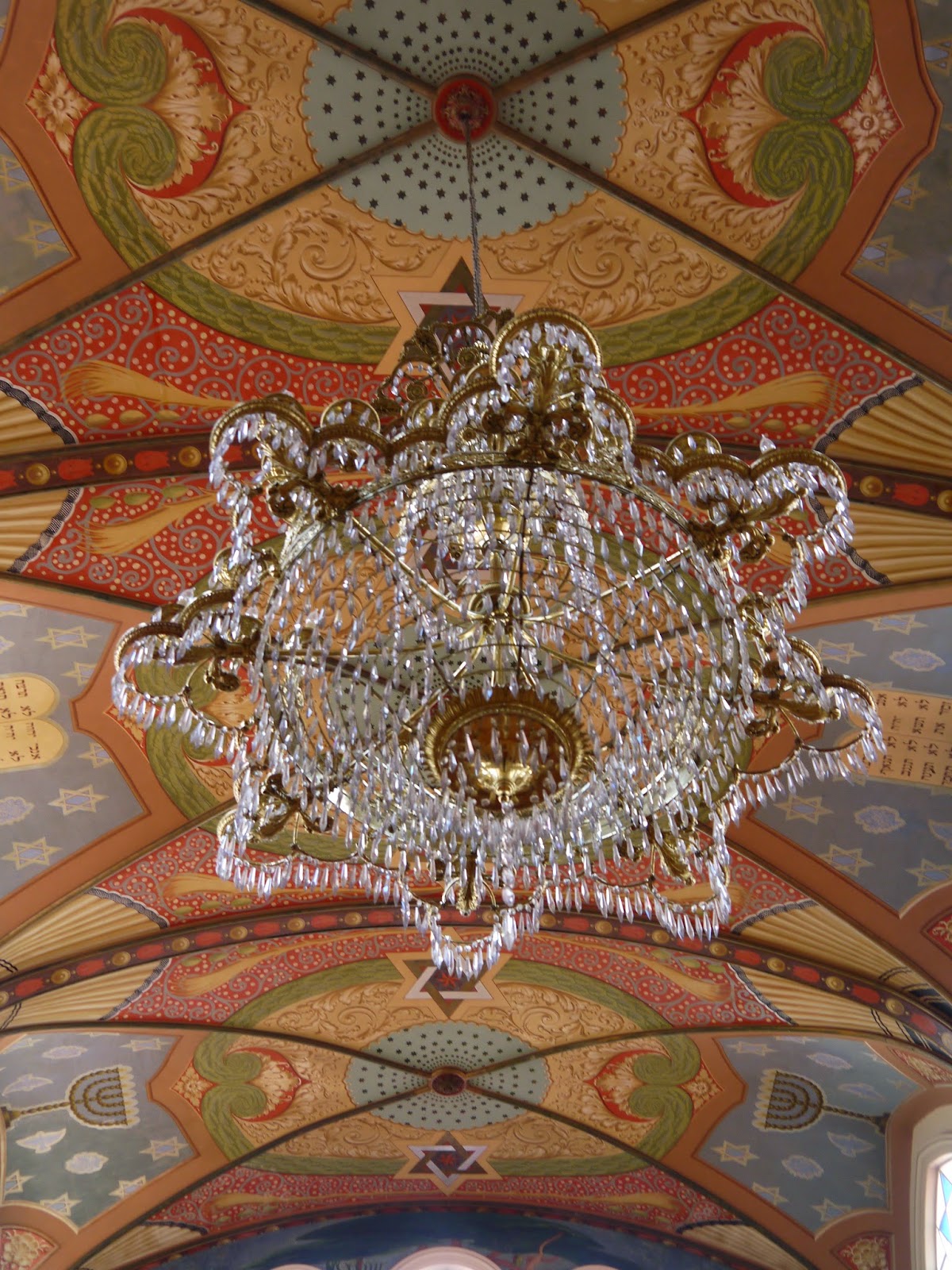 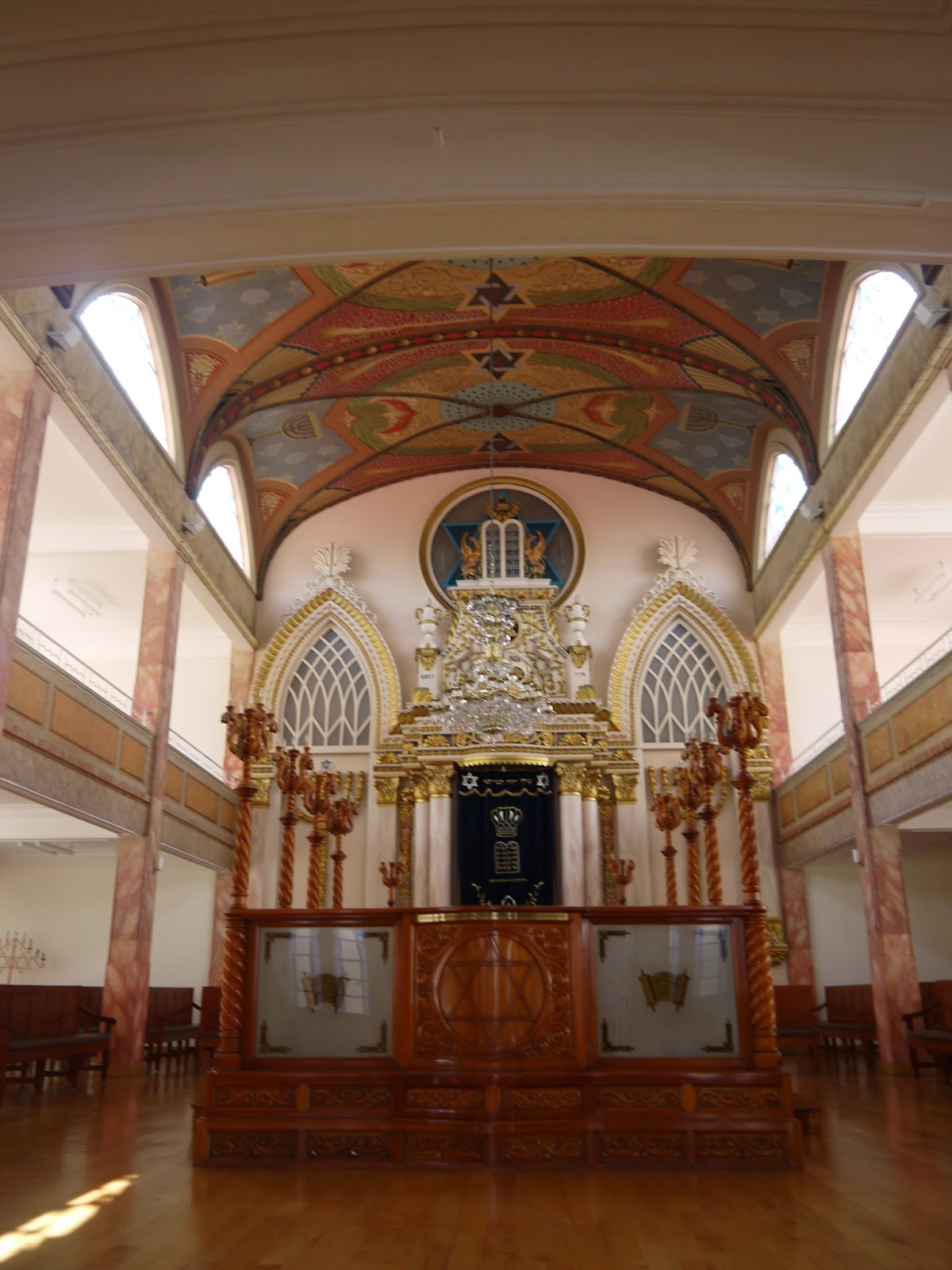 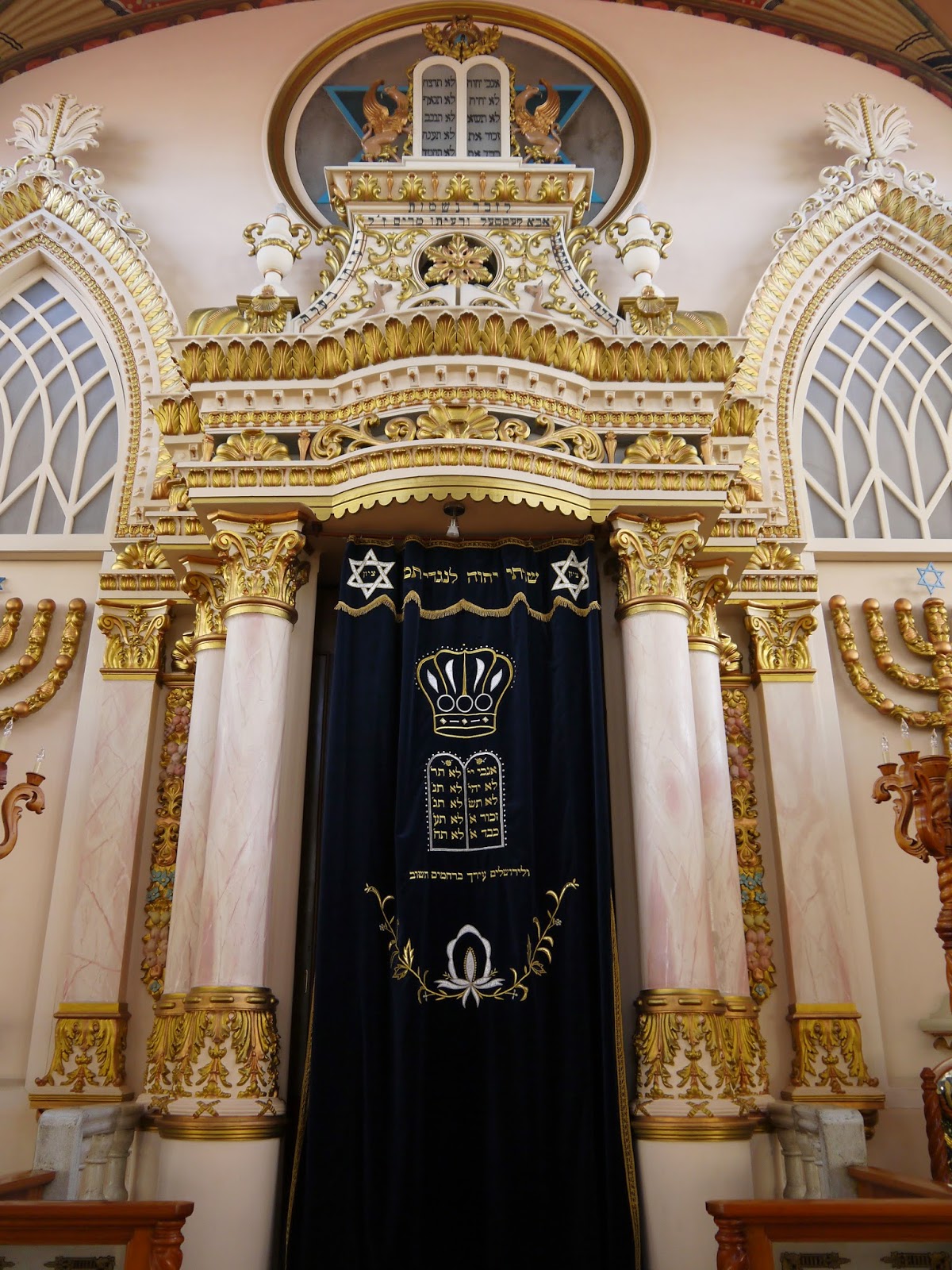 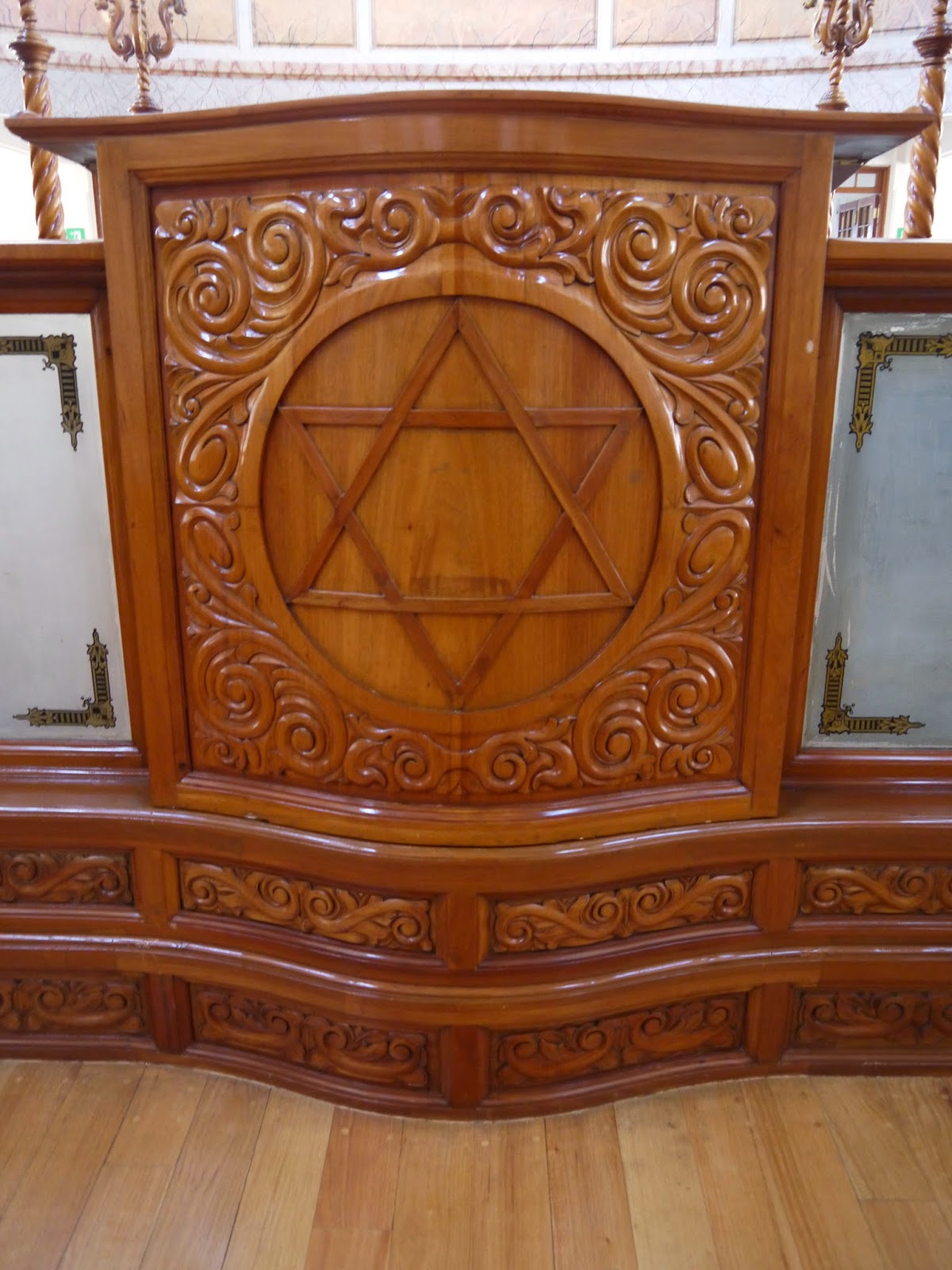