Nights Out - Life in Cosmopolitan London 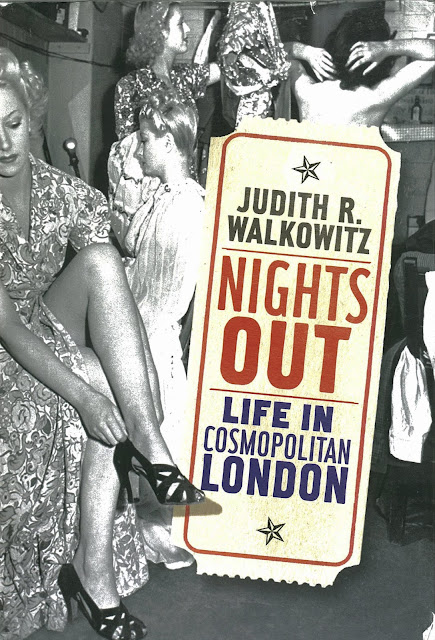 Judith Walkowitz' book Nights Out - Life in Cosmopolitan London tracks the story of Soho from the late nineteenth century up to the Second World War. Her approach to telling this gripping story is thematic rather than linear. It takes us to Soho's Italian restaurants, samples the unique culture of the Lyons Corner House, tells stories about shady nightclubs and about Berwick Street Market's once almost totally Jewish character.

The book is full of characters that have shaped this still most vibrant part of the city. These include Emidio Recchioni, anarchist, successful business man and financier of several assassination plots against Mussolini during the 1930's. A leading light in the anti-fascist element of Soho's Italian community, Recchioni was the owner of the King Bomba provisions store at 37 Old Compton Street, which became a focal point for anarchists of all types as well as artists and Bohemians from nearby Bloomsbury. its takings also funded his unsuccessful attempts on Mussolini's life.

Also from the Soho Italian community and a contemporary of Recchioni, Peppino Leoni began life in London as a waiter in the Savoy Hotel before managing to acquire his own premises in Dean Street in 1926 which today still carries the name of his restaurant, Quo Vadis. Leoni's views were different to those of Recchioni. He was a fascist and was interned in 1940 as an enemy alien - returning after the War to reclaim his restaurant and to continue to manage with a rule of iron for many years.

Women played an important role in Soho's history. The leading ladies in Walkowitz' book include the notorious Mrs. Meyrick, owner of several shady nightclubs in the twenties and thirties including the legendary 43 Club at 43 Gerrard Street with its literary patrons, "Bright Young Things", Jewish jazz musicians, "professional dancers", sexual minorities, politicians and undercover police all rubbing shoulders in the same space. Imprisoned four times for selling alcohol illegally and for bribing the police (amongst other things) she made and lost a fortune but managed to educate her children at Eton and Roedean and to marry her daughters to titled gentlemen.

But it wasn't only the notorious Mrs Meyrick who ensured women feature largely in this book. The iconic "nippies" (waitresses) of the Lyons Corner House, the women "schleppers" or touts, of Berwick Street's rag trade and the ambiguous "professional dancers" of the nightclubs all significantly influenced the character of Soho and displayed different aspects of femininity.

Lyons Corner Houses, huge cafes capable of seating hundreds of customers at any one time were a microcosm of Soho and West End life with unmarked but very clear boundaries between different types of customers including ladies in town for the day, Jewish rag trade workers and a more or less discreet gay presence. All of them wanting to pass time over tea, sandwiches, beans on toast or desserts whilst having possibly illicit assignations. All of this was managed by the vast team of nippies who had to be immaculately turned out in the regulation uniform (which they paid for themselves and which together with their hands, was inspected every day) as well as being polite but not too "familiar" with the customers. They also had to help ensure the propriety of the cafe by looking out for undesirables. One of my favourite characters who is mentioned just once in the book is one George English who was debarred from the Trocadero branch for using "filthy expressions in the new buffet".

This excellent book also looks at the commercialisation of sex in Soho with a whole chapter on the infamous Windmill Theatre - although this began long before the Windmill opened as the story about dancing girls in a Leicester Square theatre in the 1890's wearing entirely flesh coloured clothing bears out (or should that be bares out?). There is also consideration of the long established ethnic diversity of the area - including a fascinating chapter on the black clubs that evolved in the 1930's and thrived during the Second World War with the influx of black GI's.

Regular readers know I love this part of London despite the many losses of some of its more characterful places over the last several years. Judith Walkowitz manages to bring it alive with this excellent book, communicating its vibrancy, its seamier side and the absolute love of life that can still be found in Soho's streets today. Fantastic book Judith - thanks very much!