Brixton - from the market to the village 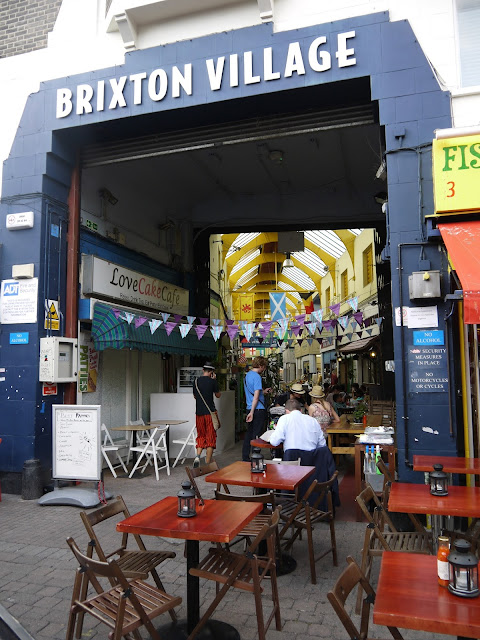 I have a soft spot for Brixton. I lived there from 1989 to 1993, first renting a room in a 1930's mansion block near the Academy and then in a multiple occupancy house on Brixton Hill. The first place was in a great location, right near the centre of Brixton. It had metal fire escapes on the rear of the block in the courtyard and residents would sit out late in the summer, talking and drinking together. The down side was that every time there was a concert at the Academy, the open access to the courtyard meant happy revellers would use it as an open toilet after the show.

The house on the hill was nice and I had access to a garden. Unfortunately so did the burglars who visited me three times in 1992 and 1993 and who helped me decide to move away. It had its ups and downs but I had some great times there and made many good friends in Brixton. I made a return of sorts between 1996 and 1999 when I worked for Lambeth Council, in and around Brixton, but in truth its many years since I really spent time there. That changed last Friday when I spent the evening with my friends Andy and Ekpo who are Brixton residents and who showed me some of the changes that have been made in recent years.

And my, what changes, many for the better, some less so. Lots of my old favourites have disappeared. Red Records from the High Road has gone, a victim of changing trends in the way we buy music rather than of anything else. It was where I spent hours browsing and then buying lots of 12 inch singles (remember those - if you are old enough of course?). This is where I bought my "Good Lovin'" 12 inch by Klymaxx and also "Touch Me Up" by Body. Ah those were the days. But it wasn't all great - Louis Farrakhan's Nation of Islam sold their anti-semitic newspapers outside as well as at the Tube Station. Not such a fond memory.

Other long gone old favourites include the fantastic Don't Panic card shop in the old market and to my horror, the fountain in the main square, now renamed Windrush Square. Don't Panic provided me with lots of those arty postcards that I still have a weakness for and was also one of the few places where it was possible to buy postcards of black icons - Billie Holiday, Bessie Smith, Josephine Baker and Ella Fitzgerald alongside images of Marilyn Monroe, Clark Gable and Lauren Bacall.

The fountain which stood outside the library was a magnet for Brixtonians of all kinds, including homeless people who would occasionally strip off, put their clothes in the water and add soap powder, resulting in both clean clothes and amazing bubble displays in the fountain which sported a Gaudi-esque design. It has been replaced with scattered seating and although the square is as lively as ever, it lacks the focus that my beloved fountain once provided.

The re-developed Ritzy Cinema  which opened in 1911, is one of the main reasons that the square has remained at the heart of Brixton. Aside from a great programme of film - both art house cinema and more "popular" offerings, the Ritzy has a great bar, a programme of other arts events including readings and exhibitions and best of all on a sunny Friday evening, serves coffee and drinks on their "terrace" on the square. On the evening I was there, it was completely full of wine and coffee drinkers enjoying the sunshine. Possibly only in Brixton, just a few feet away were a number of homeless people including one who was rolling around on the ground, shirtless and making strange noises. The square has always been a focus for Brixton's street population and the coffee drinkers haven't scared them away.

To the side of the Ritzy, in Coldharbour Lane is the Satay Bar Indonesian/ Malaysian restaurant which has been massively popular for many years. It gets queues outside at busy times and is now a Brixton institution. I remember the original Satay Gallery, a much smaller affair, a little further along Coldharbour Lane which was the precursor to today's restaurant. The move to grander premises was part of the old Brixton Challenge regeneration programme from the mid 1990's as was the renovation of the by that time pretty tatty cinema. The Satay Bar is a real success story and an example of how small local business can grow given the right support.

Other favourites that still grace Brixton include the Woolworth building, which now houses a branch of H and M on the ground floor with the upper level currently empty and retaining its original art deco features. It is to be transformed into a Holiday Inn Hotel. Holiday Inn if you are reading PLEASE do not destroy this most beautiful facade. Brixton was home to the first south London branch of Woolworths which opened in December 1910 in a building a little closer to the railway line than the current site. The original building was lost in the Second World War but Woolworths had relocated further along the road in 1936 and remained there until closing in 2009 - let's keep this little bit of history.

Woolworths may have gone but Brixton has held on to its other department store - Morleys. When I lived in Brixton Morleys was what we used to call a "god send" selling good quality household goods at reasonable prices. And today it does pretty much the same but boasts a branch of Cafe Nero too. Also still with us is the Reliance Arcade, adjacent to the Woolworth building. The arcade joins Brixton Road to Electric Lane where it has a beautiful Egyptian style art deco entrance. The arcade dates from 1924 with a 1931 extension. The arcade forms part of the world famous Brixton Market which includes the former Granville Arcade built in 1937, now known as Brixton Village.

The Granville Arcade was built to the designs of architect Alfred Vincent Burr. The name "Granville" came from the developer - a Mr. Granville-Thompson. It has a network of avenues each given a number for a name, New York style such as Fourth or Fifth Avenue. It is all topped with an arched roof. The Market is much loved in Brixton and is particularly well known for the variety of foods that are on sale. In the past there were many stalls selling fresh fruit and vegetables including Caribbean, African and Asian foods. Other shops sold black hair products and low price electrical and household goods.

In recent years the Market has undergone considerable change with many of the older shops closing and a new vibrant restaurant and cafe scene developing. Not only that, it is now re-badged as "Brixton Village". This is where I spent Friday evening with my friends and although there has been some concern about the changing character of Brixton - I loved it. Visitors wishing to eat are spoilt for choice with Caribbean, Latin American, Thai, Japanese, Chinese, Italian, locally sourced British foods, bakeries and many other options available. We ate at the Brixton Cornercopia and enjoyed a number of small dishes - chicken, vegetables, lamb and salads with friendly service in a relaxed atmosphere. We followed this up with some great ice cream at the Laboratorio Artigianale del Buon Gelato -  a tiny shop with a big name and some wonderful ice cream. I liked my vanilla and coffee ice cream with a tiny espresso so much that I returned within the week for another one!

The Village also has a number of new non food related shops including a couple of galleries, some places selling "lovely things" for the home and a couple of clothes shops. I will certainly be visiting again. I like the new look Brixton and there is still enough of the old place to keep that soft spot I mentioned at the beginning. 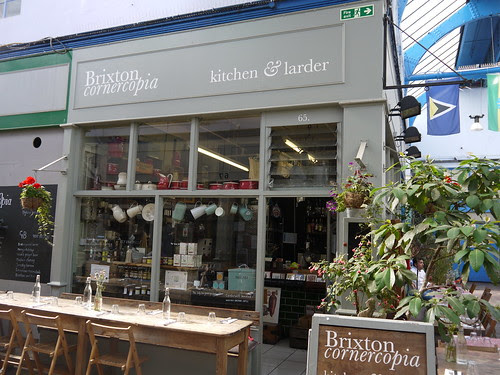