To some people Vienna brings back memories of Carol Reed's film adaptation of Graham Greene's story The Third Man. You can even take a guided tour of the Vienna sewers where the closing scenes of the film were shot. To others its the waltzes of the Strauss family or if you grew up in the 1980's it might be the memory of the 1981 Ultravox hit song named after the city - and said to be based on Reed's film. To me its none of these, although I did read and enjoy Greene's story shortly after my recent visit. For me Vienna is about three things. Art nouveau. Coffee. And cakes. And not necessarily in that order.


The city has one of the largest surviving collections of art nouveau any where in the world. I have already posted about Otto Wagner's stunning Majolica House and will write about a few more of my favourites here.  Staying with Otto Wagner, a short walk from the Majolica House brings us to Karlsplatz and the famous pavilions designed by our man for the Vienna metro system.


The pavilions, built in 1898, were part of the work Wagner was commissioned to do in designing the city's stadtbahn or railway system. As well as working on the large construction elements of the project, he devoted detailed attention to the railings, lamps and signs - a total design concept for the work. The advent of the u-bahn (metro) in the late 1960's meant that the pavilions were threatened with destruction. Thankfully this was staved off and the pavilions were dismantled and then re-constructed above the new Karlsplatz u-bahn station.


Today, one of the pavilions forms part of the Museum of the City of Vienna as the Otto Wagner Documentation Centre (pictured below). It houses a small exhibition of photographs of his work, architectural drawings and models and details of projects that were never realised. There is also a small shop with books, postcards and souvenirs specialising in Wagner's achievements as well as more general guide books for the city. You can buy a combination ticket that will get you access to the main part of the City Museum which is just across the square and amongst other things features a reconstruction of a room in the home of Adolf Loos, another Viennese architectural icon. The other pavilion contains a cafe and restaurant. The metal and wood iconic apple-green structures share the original colours of the Vienna stadtbahn and have white marble and gold detail exteriors.

The Vienna Secession was an artistic movement founded in 1897 by Gustav Klimt, Koloman Moser, Josef Maria Olbrich, Josef Hoffmann and others to challenge the staid, classicist approach to art that was the norm for Vienna in the late 19th century. The building to which that movement gave its name lies between the Karlsplatz pavilions and the Majolica House and it is very easy to visit all three in succession as well as taking in some of the other sites including the baroque Karlkirche, the Naschmarkt and the City of Vienna Museum in half a day.

Designed by Olbrich and built from 1897 to 1898, the Secession (pictured below and with detail) was originally intended to be a temporary structure but despite undergoing serious damage during the Second World War, happily, it is still with us. The bronze leaf cupola set above the crisp white, angular, almost cubist building is a well known image in the city and quite early on attracted the nickname the "cabbage head" from the irreverent Viennese.

Nowadays, the building continues to host contemporary art exhibitions but the main draw for visitors from around the world is Gustav Klimt's partially restored Beethoven Freeze in the basement. Klimt has other connections with the Secession building. It is said that Olbrich's designs were based on a drawing of his whilst Ernst Klimt, the artist's brother designed the bronze doors of the entrance. At first glance the Secession appears to be a relatively plain white building with a bronze crown, but in reality it has a great deal of decoration from the golden details on the sides to the lovely mosaic vases by the entrance - each of which are supported by bronze turtles (pictured below). The slogan above the entrance which means"Arts for the time freedom for the arts" came from the art critic Ludwig Hevesi.

One of the joys of re-visiting a city like Vienna is discovering little treasures that you had missed on previous occasions - sometimes quite by accident. On the day I visited the Werkbundieslung, a collection of modernist buildings from the 1930's I decided that rather than take a taxi to my destination, I would walk from the nearest metro station and have a look at a part of Vienna I was not familiar with. As well as seeing some more modernist architecture on the way, I fell upon the Galilei Hof, a large art nouveau building on Lainzerstrasse (pictured below). Built in 1905 as an apartment block by architect Emil Reitman, who also owned the site it commands attention on a corner lot. There are fairly ordinary shops on the ground floor of the Galilei Hof, reminding us to "look up" to see the more interesting things in life!

In an earlier article I confessed that the Majolica House is my favourite of Vienna's many art nouveau buildings. It still is, but it has a rival. Despite having visited the city several times before, I had never seen the Engel Apotheke at Bognerstrasse 9, in the city centre. How can I have managed to reach my advanced age without having admired the beautifully preserved facade of this building?

The Apotheke was designed by Oscar Laske who studied under Wagner  but later gave up architecture for painting. Built from 1901-1902, the structure is not especially outstanding but the facade (pictured below and with detail below) with its rich decoration is striking, surprising the casual passer by as witnessed by the many cameras and telephones being pointed at it each time I passed! The glass mosaic images show two angels on columns holding up healing potions with the snake of aesculapius circling their arms in reference to the purpose of the store. Further up the facade there is a sunflower frieze above a large rectangular window which itself has wrought iron bars decorated with a leaf motif.

Just a few steps away from the Engel Apotheke I made another discovery - the patisserie and chocolate shop of Zum Schwartzen Kameel (the black camel) restaurant. The reflection from the glass onto the wooden exterior of this tiny shop gave it a golden glow that attracted my attention - as did the word "patisserie" under the name board.  The Zum Schwartzen Kameel is one of Vienna's oldest restaurants dating back to 1618. Beethoven is said to have been a customer. The patisserie offers jars of sweets, cakes, biscuits and hand made chocolate - all presented in beautiful boxes and packaging. I was easily persuaded to part with 12 euros for a small box of chocolates. I ate them all within two days of returning to London...

Which brings us to the coffee and cakes. There are hundreds of coffee houses in this city ranging from extremely old, extremely authentic to the chains you can find in almost any city in the world, including Starbucks. I have nothing against Starbucks - but I find it hard to understand why in a city like Vienna with its excellent coffee houses anyone would want to go to a chain cafe? Each to their own I suppose.

I have a couple of favourite cafes in Vienna. Opened in 1876, Cafe Central in Herrengasse was once the second home for many artists, writers and assorted Bohemians who spent there time there arguing, discussing, working and running up tabs that may still be unsettled. Jewish writer Peter Altenberg spent so much time there that he gave the cafe as his postal address and a figure representing him sits at the first table guests see when entering the premises. Kafka is also said to have used the cafe as a place to write in. Today Cafe Central is largely the preserve of tourists and is somewhat expensive, but I still like to visit, to look up at the vaulted ceilings (pictured below) and to enjoy some strong coffee with the obligatory glass of water served in central European cafes (why not in London?). And of course, its a great place to savour the delights of an apple or cherry (or apple and cherry) strudel, cheesecake or some other delicacy brought to the table by the smart, black suited waiting staff. 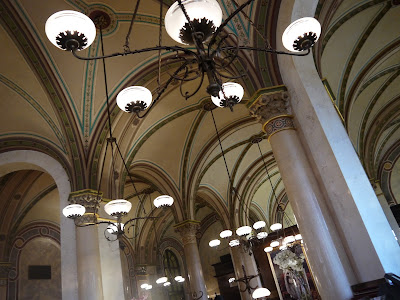 Cafe Hawelka has a different ambience.  It originally opened in 1906 as the Chatham Bar. The wood panelled interior is believed to be the original and no renovation or remodelling has ever taken place. It was acquired by Leopold Hawelka in 1939 who together with his wife Josefine ran the cafe until her death in 2005 and his in 2011 - some months after his 100th birthday. The place still attracts students, artists and "real" Viennese to drink coffee and read the papers as well as tourists from all over the world. My choice here is a slightly different take on the strudel - a cheese strudel made of four different kinds of sweet cheese wrapped in filo pastry. Delicious. The service here is less formal but efficient and its OK to linger for a long time over a book, newspaper or laptop - perhaps the only concession to modernity.

All of the best and most interesting coffee houses are listed in The Vienna Coffee Guide 2012 which is well worth investing in if you are unfamiliar with the city. A word of warning. Smoking is still legal in Austrian cafes and restaurants. Larger establishments might provide a separate room for smoking, or designate a space, but smaller places can remain as "smoking cafes".

I like Ilona Stuberl, a very small Hungarian restaurant established in 1957 to cater for refugees from the failed Hungarian uprising. Named after the Hungarian lady who founded the restaurant with her husband, it is a friendly, charmingly old fashioned place where even the flower vases match the crockery. Old fashioned heavy (and meaty) Hungarian food is the rule, but I had a good tomato and mozzarella salad starter and then a tasty(and filling) mushroom  goulash with gnocchi. I was impressed that the waiter noticing my meat free order told me that one of the breads contained small pieces of bacon so I might like to avoid it! I might have stayed longer but found the smoke too much, primarily from a table of older people celebrating a birthday. The smoke was annoying but they were interesting to look at. At least in their seventies, the women still had ornate "big" hair dos.  The men sported  amazingly combed monstrosities with their remaining locks wrapped around and over their heads in Daliesque, gravity defying styles, or perhaps as a tribute to the sweeps and swirls of art nouveau decoration.  Astonishing. Perhaps I am only jealous.
Posted by Yekkes at 15:02