Clouds over the Caucasus - Travelling in Azerbaijan

I visited Armenia and Georgia in 2008, but chose not to go to neighbouring Azerbaijan as the wounds of the Armenia/ Azerbaijan conflict were still raw and a visa in your passport for one of the two countries made it extremely difficult to visit the other one. Things are quieter now and I have been planning this trip for some time, but that didn't stop me being asked a number of questions about my visit to Armenia in 2008 before, satisfied I was a bona fide tourist, I was waived through immigration at Baku, with a passport stamp and a smile.

The plan was to spend some time in Baku but also to see some other parts of the country, including a beautiful town in the north, called Sheki. I spent the first night in Baku - exhausted after a four hours flight to Moscow, six hours waiting in transit and then another three hours flying to Azerbaijan. I dumped my stuff and headed for the old city, foolishly really as I was already dead on my feet. My initial excursion into the centre lasted all of one hour as I felt I would fall asleep in the street and to make matters worse it started to rain heavily. So back to the hotel and to sleep.

However, that short trip to the old city was fascinating in itself. Boarding a bus to the nearest metro station (named January 20th in honour of the fallen peaceful protestors on this date in 1990 when Gorbachov sent the Soviet army in to quell a feared rebellion), I asked the driver to tell me when to get off. Very few Azeris speak English and I was a little worried I hadn't made myself understood. My Azeri consists of one word - chaihor, which means tea addict, rather than someone who does it for a cup of tea - so I was a bit limited. No need to worry. A young man who had heard the exchange not only reminded the driver to tell me when we had reached my stop, but he also pointed out the somewhat obscure entrance to the Metro station for me.

This treatment continued when, struggling with loading up a travel card with coins, an elderly woman took control and completed the exercise for me and two passengers on my train escorted me to the correct platform at the interchange having seen me pondering the intricacies of the station named November 28th. I was very pleasantly pleased. The pleasant pleasing continued when I noticed that although the train was full, whenever a woman got on, at least one man would stand to offer, nay insist on her taking his seat. This was usually followed up with an initial demure refusal followed by a nice sit down.

I will write more about Baku in a further post but first I want to write about Sheki - a small town in a beautiful setting which is little known, but waiting to be discovered. About a six hours drive to the north of Baku and enjoying a much more temperate climate, Sheki's prime attraction (at least for me) is the extremely beautiful and carefully restored Emir's Sarai (palace). A complete riot of colour with stained glass windows, geometric designs, floral motifs and in contravention of Islamic law, miniatures featuring representations of humans and animals, the interior of the Sarai is mesmerising. Everywhere I looked there was something to draw me to examine the walls, the ceilings or the windows in more detail. 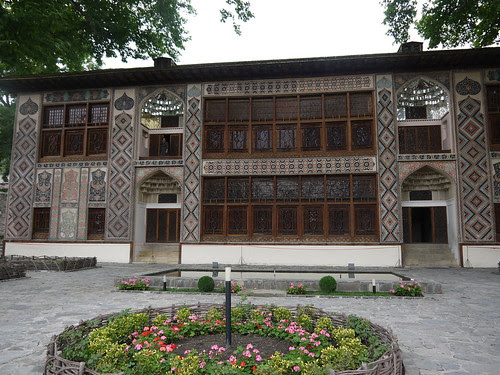 The exterior is also extremely ornate and colourful, but somewhat understated in comparison. Again, geometric shapes and many different colours are used to stunning effect. The Sarai dates from the 18th century and most interestingly of all,  it was built without a single nail. The stained glass windows are made by placing hand cut pieces of glass into a complex wooden-slatted frame.

Photographs are allowed of the exterior of the building but are strictly forbidden inside. It is possible to buy a small set of frankly poor quality "postcards" for 5 manats inside the gift shop or a well illustrated book which includes English text for the princely sum of 80 manats - which was too expensive for me (about 65 pounds). A third option is a poorly illustrated Soviet style (and dated?) publication on all of Sheki's attractions. A little effort in producing something of much better quality at a reasonable price would pay dividends in terms of income generation - but this is a small quibble. The Sarai was one of my main reasons for visiting Azerbaijan. There was some doubt that it was open to visitors, but it was open, and it was a real highlight for me.

The fortified grounds of the Sarai include two museums, one in a former religious building which is well maintained and the other in a less well preserved soviet style structure. The collections are described as "ethnographical" and include some traditional costumes, musical instruments and everyday
items from Sheki homes, photographs of famous people originating in Sheki and a moving section on the town's contribution to the Great Patriotic War (World War Two), where over 10,000 townspeople lost their lives.

There is one other "attraction" in the grounds of the Sarai - the so-called "wolf man". For one manat, the fur hatted elderly gent will allow you to take his photograph together with his stuffed wolf, having switched on the electric "red eyes" in his little friend first. Bizarre? Yes. Did I part with one manat? Of course. I am told he considers himself the only human ever to have benefited from a wolf. Mmm.

Baku has many expensive and sophisticated shops. Sheki has a bustling, noisy, sprawling bazaar. I saw fruit, nuts and vegetables, meat and poultry, live animals, mouse traps, brooms made from twigs, electrical goods, household items and clothing. I was delighted to see (and buy) some of Sheki's famous sweet halva. It is sold from enormous piella style pans at a ridiculously low price (4 manats for a massive box), which I was only too happy to take advantage of, supplemented by a healthy half kilo of dried apricots for even less, while my guide bought a huge bag of walnuts, a smaller bag of hazelnuts and a phenomenal number of eggs to take home on our return to Baku. 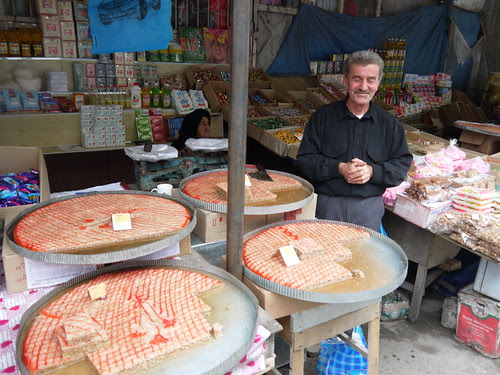 The bazaar is not for the feint-hearted. As well as some very sad live poultry, sitting with legs tied together waiting to be sold (and not for their eggs), you can see trays of offal and also severed sheep heads for use in cooking. Portobello Market it certainly is not, but I enjoyed the experience - again, the people were very friendly - men and women greeting me with a "salaam" and lots of people wanting to know where I was from. I also noticed an elderly man with a prayer mat spread out underneath his stall where he was saying his afternoon prayers whilst the market was in full swing.

Sheki is set in a very green valley and wherever you are, you only need to look up to see the mountains that surround the town. The effect of the very green hills against the almost uniform red slate roofs of the  mainly single storey houses is very striking. But not as striking as the constant clean white clouds that drift across and down the hills and mountains, creating a mystical effect and making it easy to believe that you might be in a different time, far away from the present. There is something hypnotic about these clouds that hang over the Caucasus and I tried, largely in vain, to capture that mood in my photographs.

Speaking of a different time, I met, quite by chance, four veterans of the Great Patriotic War whilst in Sheki. There is a panoramic viewing platform overlooking the city and it was here that I saw the four elderly men being filmed by Russian television for a TV show. They were extremely charming and friendly and through my guide told me that their oldest comrade was called Farukh. Farukh is 93. He survived the siege of Leningrad and also fought in Finland. Like his colleagues he was very be-medalled. He told me that he still plays the oud and that he would be playing for the television programme. Another one was anxious to tell me that his son had studied at Cambridge University. It occurred to me that his son could well be 70 years old. It was an unexpected pleasure to meet these four men who are part of a very rapidly reducing remnant of people who experienced those terrible times. 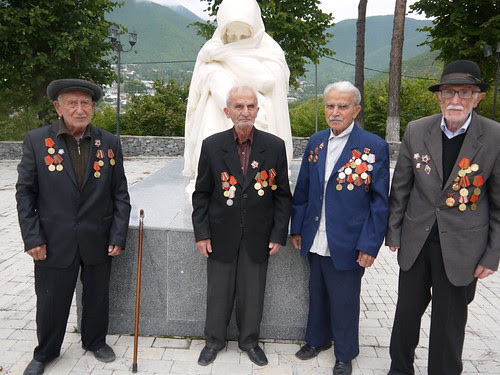 The centre of Sheki boasts two caravanserai, one of which has been converted into an hotel with a series of craft and souvenir shops around the outside. The courtyard of the hotel is beautiful with an ornamental garden and seating which some of the rooms look down onto. The shops mainly sell a range of silk and woollen items, various souvenirs and trinkets as well as one shop that sells handmade wooden instruments. There is also a small and friendly post office adjacent to the caravanserai, so you can send your postcards home from here.

The village of Kish is just a short, but bumpy drive from Sheki and is home to what is claimed to be the oldest church in the Caucasus. Known as the Albanian Church - no links with the Balkan state of Albania - but named for a different ethnic minority that inhabited these parts in the middle ages), it has been lovingly restored through the efforts of local people working closely with a Norwegian charity linked to author Thor Heyerdahl. There is some dispute about the age and origins of the church but several sources date it from the 12th or 13th century. There are stories that link the site both with the apostle, Thaddeus and also with the prophet Elijah. No longer working as a church - there are no Christians living in modern day Kish - local people still recognise it as a shrine and cherish it both for its historical and spiritual significance and because of the work it has brought in the wake of foreign visitors. A great example of tourism bringing benefits to local people rather than destroying environments. 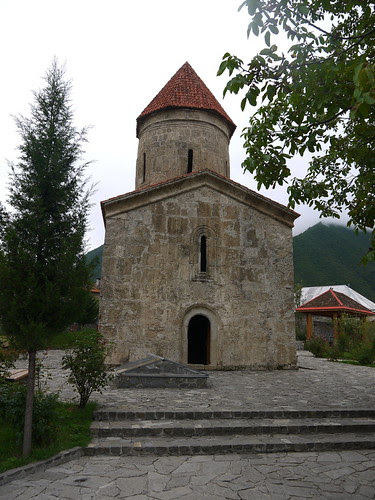