Do You Know Where Dhaka Is? - Adventures in Zakaria Street, Kolkata

The first time I visited Kolkata, I dumped my bags at the hotel and headed for Zakaria Street. The Kolkata Heritage Photo Project’s book “Calcutta Chitpur Road Neighbourhoods” had inspired me to explore North Kolkata and this busy street and the lanes leading off it seemed like a good place to start.

Zakaria Street is at the centre of a predominantly Muslim area, famed for the magnificent Nekhoda mosque that stands at the junction with Chitpur Road. The mosque was built in 1926, can accommodate 10,000 worshippers and is intended as a replica of the Mughal Emperor Akhbar’s tomb in Agra. It is the city’s largest mosque and dominates the skyline of this part of Chitpur Road. The street is also known for its many food vendors, most of whom offer meat dishes. Although not suitable for a vegetarian like me, the stalls are immensely popular with locals and also attract a few tourists.

Zakaria Street is relatively narrow and very crowded. Despite this all kinds of vehicles manoeuvre their way along it, delivering goods to the traders or picking up items to take elsewhere. Crossing the road can be a bit of a challenge as trucks, hand pulled rickshaws, tuk-tuks, humans and the occasional animal compete for space. It is a great place to observe and photograph Kolkata’s street life. I soon discovered that approaching people for portraits can result in a lengthy exchange, involving my answering many questions in what I now know to be a standard Indian style interview about where I’m from, what I’m doing in India, what my marital status is, how much do I earn and what do I think of the city. This is almost always accompanied by an invitation to drink tea purchased from a chaiwallah, one of whom is to be found on almost every street .

One such invitation came in a lane leading from Zakaria Street to Tarachand Dutta Street. I noticed a sign for a drycleaner’s bearing the service legend “Ordinary 4 days, semi-urgent 2 days”. No urgent service. A group of men were sitting in front of the sign and I asked if they wouldn’t stepping aside for a moment so that I could photograph it. “No problem” came the reply as Javed Uddin stepped forward, introduced himself as the owner of a nearby delivery business and offered me the obligatory chai. His friend’s daughter had been married the day before and he insisted that I also eat some sweets, left from the wedding. He asked me the routine questions and then said “do you know where Dhaka is?”. “Yes, it’s the capital of Bangladesh”. I replied. He seemed surprised and said “It is exactly that. It is also the name of that building. Dhaka House. This also belongs to me”, indicating said premises with a flourish. I sat for a while, drank my tea, ate some sweets and then got up to go. He insisted I drink water before leaving “it is a very hot day, you must drink” he said. He handed me a large bottle of water that he and his friends had been passing between them. Not wanting to appear rude I decided I would take a sip and managed to drink a little without putting my lips to the bottle and without pouring the contents over myself. A good technique and a steady hand is vital in order to do this.

After shaking my hand and checking I had his name, Javed advised me to be careful and said that if I had any problems, or if anyone gave me trouble in Kolkata, I was to come and see him. “I can help. I know people” he said. I photographed him standing beside a motorbike in the doorway to Dhaka House.  I was able to give him a copy of the picture a year later. It wasn’t my best work, but he seemed pleased with it. 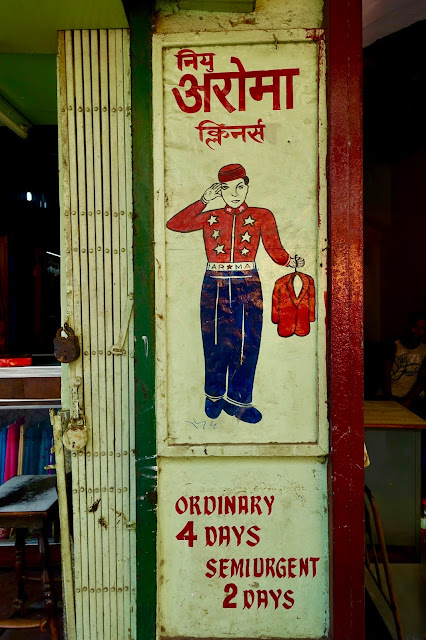 Making my way into Tarachand Dutta Street I soon realised that the thing I was looking for was no longer there. I had wanted to see the art deco Krishna Cinema, a photograph of which appears in the Kolkata Heritage Photo Project book. It had been demolished. For a moment I wondered if I was in the wrong street. I checked with a sweet vendor who confirmed I was indeed in Tarachand Dutta Street and when I asked about the cinema, he very cheerfully said “that old thing has been demolished”.

On a subsequent visit I came across a covered arcade accessed by a narrow alley leading from the main street. An impressive gentleman wearing kurtha pyjama and an embroidered topi was sitting in the doorway of a tailoring shop. This was Mohammed Ishmail. He nodded a welcome to me and said that the shop belonged to him. He introduced a young man working over a sewing machine as Gulab, which is the Urdu word for rose. Mister Ishmael went on to explain that this was a family business and then seemed anxious to make it clear that Gulab was not a relative, saying in English “he is my servant”. Gulab clearly understand this and looked up from his work, affronted. Mister Ishmail noticed this and corrected himself, saying, in very formal English “that is to say, he is my employee”. The placated employee resumed his labour. I photographed them both and showed them the results. Gulab merely nodded but his boss laughed and said “look at me. I could be in Pakistan”.

This part of Kolkata is home to other industries too. In one of the adjoining streets, dozens of workers sit surrounded by piles of discarded metal, wood and cardboard goods. All of these waste items, collected from across the city are dismantled and used to create tools, furniture and other items. There is the constant sound of hammering as old nails are straightened and made ready for re-use. Sparks fly from welding and huge coils of recycled wire are stacked outside workshops ready for despatch and a second life.

It was in the midst of this noise and industry that I met Feroz. He was employed as a delivery man using a cyclo-rickshaw adapted to carry large loads to and from the recycling businesses. He had a shaved head, a dazzling smile and a sense of humour. He saw my camera and asked me to take his picture. Once done, he pointed at my head, laughed and said in English “you and me same to same” before laughing again and riding off before there was a chance to hear his story. I found him again a year later, but I hardly recognised him. He was sleeping on a charpoy at the side of the road. I only knew it was him because I showed his picture to a couple of porters who recognised him and took me to him. His hair had grown back but the smile was absent, and his eyes were dull. He smelt strongly of alcohol. Alcohol dependancy is a widespread problem amongst day labourers, many of whom come from other parts of India and live alone in the city without the support of their family. He managed a half smile and a “thank-you” as I handed him his picture before he returned to his charpoy and went back to sleep.

The mosque is not the only interesting building here. There are several once elegant mansions, built by wealthy Marwari merchants after 1911 on land purchased from the Calcutta Improvement Trust. The mansions replaced slums inhabited mainly by poor Muslims, many of whom had come from East Bengal towards the end of the previous century. Today the Marwaris are long gone, relocated to smarter addresses in the south of the city or to other parts of India. Their former homes are rented out for both residential and commercial purposes and although there are hints of former glory, there is a general shabbiness to what remains. There are several hotels here, some of them sporting impressive names, such as the De Luxe Guest House and the Rajasthan Guest House. In Keith Humphrey’s excellent book “Calcutta Revisited”, he suggests that they are suitable only for “…the adventurous, desperate or impecunious”.

Zakaria Street and some of the neglected mansions feature in Kunal Basu’s book “Kalkatta”. The hero lives in one of the old apartment buildings. The book tells the story of a Muslim family with a complicated background. The parents fled Bihar during partition and settled in the former East Pakistan, present day Bangladesh. In order to escape poverty, they obtain forged papers and return to India to make a new life in Kolkata. The son, Jamshed is the focus of the story as he struggles to fulfil his parents’ ambitions for success. Basu captures perfectly the atmosphere of the street with its overcrowded, once grandiose tenement buildings, the daily struggles to make ends meet and the city’s complicated politics.

I was last in Kolkata in September 2019. At the time there was no way of knowing that it would be impossible to return a year, or even two years later. Until the world changes again the only way to visit this, my favourite Indian city, is through the pages of books. For those who want to explore for themselves, some suggestions are listed below. 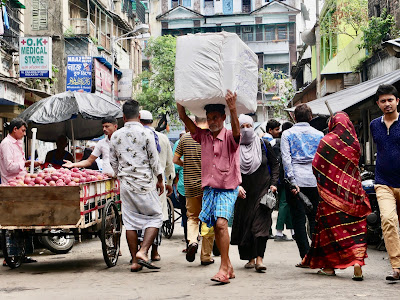