The Musemah Yeshua Synagogue in Yangon's 26th Street is a glorious reminder of a once thriving Jewish community. Today there are no more than 20 Jews resident in the city - the remnant of a community that peaked at about 2,500 before the Second World War. The main Jewish holidays are still celebrated in the synagogue with the congregation augmented by visiting tourists and at least some of the up to 100 Jews from other countries who work for various organisations in Myanmar.
I was able to visit the synagogue during my recent tie in Yangon and to admire the light, airy, beautifully maintained building, on the edge of Yangon's India Town and not far away from the city's last remaining Jain Temple. The entrance is discrete but clearly signed and visitors are offered a warm welcome six days a week - the building is closed on Sunday. Completed in 1896, it has beautiful stained glass windows, ornate decorative details around the bimah and beautiful bamboo and teak seats, reflecting local traditions and tastes. Despite being tucked away in a side street, the interior is very light and airy and does not have the air of sadness of many European synagogues with communities of similar size but different history. 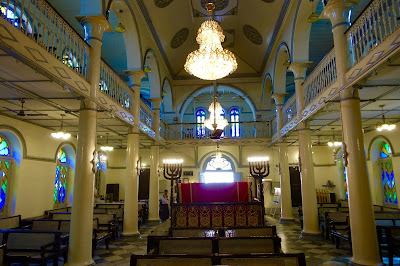 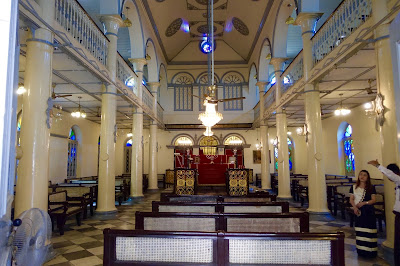 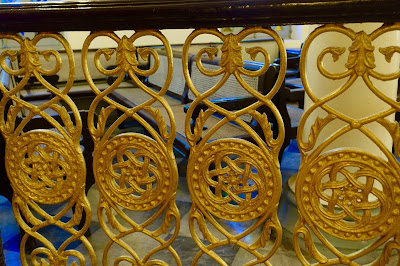 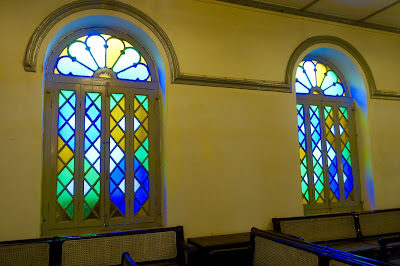 Myanmar's first Jews arrived in the early 1800's - merchants and traders from Calcutta, most of them members of that city's Iraqi Jewish community, originating from Baghdad. They were involved in a range of trades including textiles, timber, ice production and bottling. Some members of the community became influential and prominent in civic life and one place was allocated to the community on the Yangon (then Rangoon) Municipal Committee. Participation in public life reached a peak in the early part of the twentieth century with the appointment of Jewish mayors to both Yangon and the smaller city of Pathein (then Bassein).

Brothers Judah and Avraham Ezekiel came from Baghdad to Myanmar in 1840, settling in Mandalay and worked for the Burmese monarch, King Mindon, as accountants or bookkeepers. At some point the brothers quarreled, separated and Judah moved to Yangon where he became so successful that a street was named after him possibly due to his philanthropy which included paying for the metaling of the road. He ensured the care of "his" street by leaving nine rupees per month in his will for its ongoing cleaning. He appears to have been a larger than life character in all senses of the term. Almost Englishmen a short history of the Jewish community in Myanmar includes a story describing the reluctance of rickshaw drivers to carry him due to his large size which on one occasion caused him to go through the floor of a carriage.

Isaac Sofaer was another prominent member of the community. Born in Baghdad in 1867, his father brought him to Yangon at the age of nine. On completion of his education he worked for a wine and spirits company before going into business with his brother Meyer in 1893. Messes Sofaer and Co also sold wines and spirits and became involved in exporting rice. Isaac was not only a successful businessman but also took part in civic life supporting organisations such as the Agricultural Society and the Burma Pasteur Institute.

He was also responsible for the design of the elegant and imposing Sofaer building, completed in 1906 and which still stands today on the corner of Merchant Street in the city centre. The building once housed the Reuters telegram office, a Filipino hairdressers and shops selling Scotch whisky, Egyptian cigars and English sweets. The design included ceramic floor tiles, imported from Manchester and arranged in a green, gold, lapis lazuli and burnt sienna mosaic. Some of the original tiles still remain. The building today is a shadow of its original self but there are signs of recovery with Gekko, a very successful Japanese restaurant taking space on the ground floor as well as one or two shops selling tourist items. The Lokanat Gallery on the first floor is the city's longest established independent gallery.

The golden age of the community ended abruptly in 1941 when most of its members fled as a result of the Japanese invasion. Although some people returned at the end of the war, the much reduced numbers made it difficult to sustain community life. In addition to this here were various disputes about the management of the community, which did not help matters. These and other issues are detailed in Ruth Fredman Cernea's excellent book Almost Englishmen: Baghdadi Jews in British Burma which charts the history of the Jews in Myanmar. There was a second wave of departure in the 1960's following nationalisation of almost all the country's businesses. There has been no rabbi since 1969 and kosher meat is not available. Community members compromise with halal produce.

Despite this, you could be forgiven for thinking that Yangon's Jewish community is much larger than it really is. This is because it is possible to see a Magen David (Star of David) displayed outside many businesses across the city. This is not that the businesses are Jewish owned but rather that some locals believe the symbol will bring them luck and success. However there is at least one building with a Magen David on its facade that does have strong Jewish links. The wooden building in the picture below, close to the magnificent Shwedagon Pagoda complex was once Jewish owned and the location for an ice factory. Look closely and you can see the Star at the apex of the facade. The community may be very small, but its presence and achievements live on through the synagogue, the Sofaer building and through symbols such as these.

Visitors wishing to know more about Myanmar's Jewish history might like to contact Myanmar Shalom  which can organize visits to the synagogue and to the places connected with the community's history.

You can see more pictures of Myanmar here.
Posted by Yekkes at 21:41