In my first post from Buenos Aires I concentrated on the San Telmo neighbourhood in the centre of the city. This post covers Palermo and Boca two very different areas, takes a brief look at the city's jazz scene and a few of it's best art nouveau buildings.

In recent years, the Palermo neighbourhood has become extremely fashionable with its many cafes, restaurants, design stores and other stylish destinations. Steak restaurants are ubiquitous (and excellent) in Buenos Aires but in Palermo it is easy to find alternatives. My favourites included the design conscious Fifi Almacen at Gorrita 4812 which offers colourful salads and very fresh sandwiches and soups as well as bowls of fresh fruit salad. All nice and simple and all delicious. Of course they also have excellent patisserie and good coffee. I also enjoyed Mott Cocina de Mercado, an open fronted super stylish bar and restaurant at El Salvador 4685 which sources most of its food locally. Some good vegetarian dishes are available alongside the meat and fish choices. I enjoyed ravioli stuffed with pumpkin in hazelnut cream and sun dried tomatoes, but the dessert - banana soufflé with dulce de leche and a shot of Baileys topped the bill for me.

The best Mexican food is found in Mexico (!) but Xalapa at El Salvador 4800  has quesadillas and other standard dishes as well as a very interesting (and very strong) coffee laced with an orange liquor. And if you or your traveling partner absolutely must have steak,  La Choza at Gascon 1701 is a great choice. You are unlikely to see other tourists here. The service is attentive in an old fashioned and unobtrusive way and for those who don't want steak, grilled chicken, large salads and pasta dishes are also on offer. A nice touch is that the coffee arrives with a tiny ice cream served in a shots glass - so no need to order dessert!

Palermo also has a number of book shops. Libros de Pasaje at Thames 1762 combines a book shop where the stock is set out on a series of tables as well as on beautiful wooden shelves, with a good cafe where you can linger over the latest titles. There are a few volumes in English including translations of some of Argentina's leading writers - but it is generally quite hard to find English language books in the city. I asked about this in a couple of places and was told that there are high import duties on books from overseas so this may be the reason why.

A couple of other shops that are worth a look are Gorrion at Gurruchaga 1783 which sells bags and other accessories including colourful socks and hats and has helpful, friendly staff, and Bolivia in the same street at 1581. Bolivia stocks a wide range of t-shirts, jeans, sweaters, socks and other mid-priced casual pieces, including a few items for children.

I chose to stay in Palermo during my visit, in a small (just eight rooms) boutique hotel - the Magnolia - in Calle Julian Alvarez. The hotel is located in two nineteenth century houses that have been knocked into one whilst retaining many original features, especially in the common areas. There is a beautiful stained glass window in the ceiling at the top of the stairs and some beautiful large scale vintage photographs in the lobby. There are also a couple of patios and a fantastic rooftop terrace with views of the Palermo skyline. My room was large and comfortable and the staff extremely friendly, helpful and able to give advice on many aspects of the city. There are a number of good cafes close to the hotel and you can walk to the Bulnes subtle (metro) station in about ten minutes.


Like Palermo, the La Boca district attracts many visitors, but that is where the similarity ends. In the nineteenth century La Boca was home to thousands of Spanish and Italian immigrants, many of whom arrived during the 1880's to work in the booming beef industry and were employed in meat packing plants, warehouses, processing and shipping. Still a working class area today, it is famous for its brightly coloured houses and shops which are painted in bright reds, yellows and blues as well as for its main tourist street, El Caminito. At the weekend, thousands of tourists come here, many on tour buses to shop in the small crafts fair (some stalls are better than others) and to see the tango dancers performing outside the cafes and restaurants or on street corners.  It is a photographer's paradise with its riot of colour and activity but be warned that the dancers and those who pose in fancy dress will expect a few pesos if you want to take their picture. El Caminito's most photographed feature is the narrow corner where the two main streets meet and where, at the moment, there is a mannequin of Buenos Aires born Pope Francis, welcoming visitors to the area from the window above the Havanna sweets shop..

In addition to the painted buildings, there is a painted wall in the centre of La Boca where a mural shows the Mothers of the Plaza de Mayo, mothers of some of the "disappeared" - people who were taken, often from the street, during the dictatorship of the 1970's and 80's, and who never returned. More of the mothers later. The mural is the work of artist Lucas Quinto with assistance from La Boca art students. Clearly influenced by the Mexican muralists, the women are shown with Mayan features whilst the names of some of the 30,000 plus who were "disappeared" are included in the work.

Most of the guide books advise visitors to remain in El Caminito and certainly not to stroll alone here after dark as away from the main street it can be a little rough and there is a risk of being robbed. I went during the day and felt safe enough to explore a couple of the streets away from El Caminito and to see where the locals buy their food, stand and chat with their friends and even where they go to church. There are also a number of once very grand buildings that will eventually attract the attention of either developers or wealthy people wanting to live in a more "edgy" area. Let's hope things don't change too much.

Whenever I travel I try to find live music and in my previous post on Buenos Aires I wrote about the tango. Regular readers will know I am a jazz devotee. Buenos Aires has several venues that feature jazz as part of their programme but Club Thelonius at Calle Salguero 1884 in Palermo is the real thing with concerts by both local and international artists. Situated in a long narrow room on the first floor of a former mansion building, there are two shows most nights with a 9pm (ish) house and then another show starting at half past midnight. I managed to get to two concerts during my stay, both featuring local artists and both excellent. The first was a tribute to Dizzy Gillespie with some of his compositions being played and other tunes being performed in the style of. The second time I saw a great (great!) concert featuring several local young people performing the music of Charles Mingus. The line-up included a fantastic woman sax player and a woman vocalist who gave us some very cool interpretations of Mingus' music. Unfortunately I didn't catch their names.

Still on the subject of jazz, there is a great little music shop in Buenos Aires, Jazz 46 at Esmeralda 482 in the centre of the city where the owner recommended albums by Barbie Martinez, Paula Shocron and Ricardo Cavalli when I asked for some local jazz recordings. I bought all three - and like them all.

It is possible to find almost every architectural style of the last few hundred years in this city, including contemporary, art deco, modernist, classicist, a few colonial style buildings (although surprisingly very few) and lots of art nouveau. There are several buildings in the art nouveau style along Rivadavia, Buenos Aires' longest street which I am advised has building numbers up to 20,000!


Rivadavia 2009 is one of the city's best examples of the art nouveau style. Built in 1907 and designed by the architect Eduardo Rodriguez Ortega, it was originally designed as an apartment block, but fell into a poor state of repair and was semi derelict when restoration work began in 1999. The sensitive restoration included works to the fabulous glass dome - the block's crowning glory. When the sunlight catches the glass, it reflects rich, vibrant colours that can be seen from the opposite side of the road. There is also a magnificent main door to the apartment - all glass and metal and a wonderful (original?) lift cage in the lobby. The ground floor and mezzanine levels are occupied by a car dealing company and the upper floors are once again residential. On completion of the restoration and in homage to  Catalan architect Antoni Gaudi, the architects placed the phrase No hi ha somnis impossibles - Catalan for there are no impossible dreams. There are replicas of some of the decorative items from Gaudi's Casa Batllo on the front of the building at 2009 Rivadavia.

Ortega was an admirer of Antoni Gaudi and his influence can de seen in the design of both Rivadavi a2009 building and his other apartment block at Rivadavia 2031 - the House of Lilies, built between 1903 and 1905. The house takes its name from the lily stems, flowers and other botanical features on its facade. In the centre of the uppermost level there is a stone sculpture of a man's head, said to represent Poseidon and reminiscent of some of the decorative features found on Riga's art nouveau buildings. There are shops on the ground floor, with residential properties above. The House of Lilies was recognised as a national monument in 2006 and now enjoys official protection.

Still on Rivadavia, at 3216 and on the opposite side of the road to Ortega's buildings, there is a fabulous ensemble known as the House of Peacocks. Designed by Italian architect Virginio Colombo and completed in 1912, it was originally a shop selling shoes for women and children, trading under the name "Rossi Brothers". The business operated on the ground floor with residential space above. Today the building houses a gym, a bed and breakfast hotel and some private flats. I especially like the ornate, pink balconies and the riotous colours of the adjoining building which dates from the same period and which features typical art nouveau motifs with the stylised heads and decorative discs. 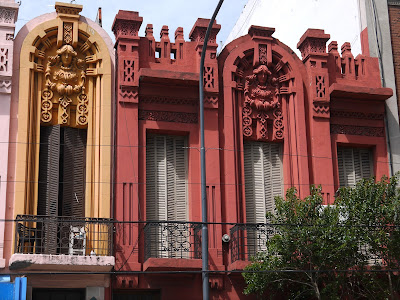 Much as I love Rivadavia, my favourite art nouveau facade is at Paraguay 132. It features a stunning ceramic tiled facade depicting a pastoral scene in greens and yellows. The metal balustrades on the balconies have classic art nouveau motifs with grapes and other botanical representations. This slim building was designed by another Italian architect, B. Trivelloni and was completed in 1911.


I promised to return to the subject of the Mothers of Plaza de Mayo. I was able to visit the Plaza on Thursday afternoon and to see the elderly women arriving in a mini bus and staging their weekly march around the plaza. Each one wraps a white kerchief around her head in reference to a baby's nappy and the children they lost during what became known as the "Dirty War" during the dictatorship. Many of them do not know where their children's bodies are and some still hope to be reunited with the grandchildren, taken from those who disappeared and given to families sympathetic to the former regime. It is an extremely moving experience to see these women and one which will be a lasting memory of my time in Buenos Aires. 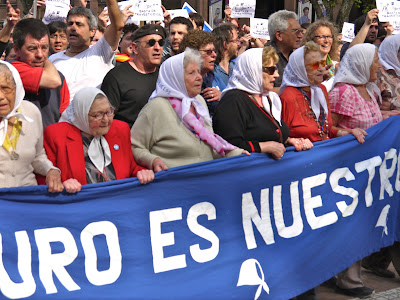 You might also like Cafes, tango and a marvellous market - Buenos Aires for beginners part one and Jewish Buenos Aires

You can see more photographs from Buenos Aires here.