Stories of return, the loneliness of the Poles and the importance of reading - Jewish Book Week 2013

Moving into the middle part of this year's Jewish Book Week, I have been struck by the theme of "return" running through a number of events. This includes the return of individual Jews to cities such as Vienna and Prague as Holocaust survivors or as former refugees and an idea about a return of Jews en-masse to Poland.

More of the Polish issue later, but I want to start with two events from last night. Helga Weiss was just 13 years old when she was deported from her home in Prague to Terezin with her mother in December 1941. Like many Czech Jews, her family were fairly assimilated, attending synagogue just three times a year and mixing happily with both Jewish and non-Jewish neighbours. However, unlike many Czech Jews they did not celebrate Christmas. The young Helga, desirous of a Christmas tree made one for her dolls, reasoning that "the dolls were not Jewish".

Helga, now in her 80's, described the gradual falling away of friends as anti-Jewish measures were enacted in the lead up to deportation. These, as well as her experiences in Terezin and later in Auschwitz are described in her book "Helga's Diary" which she kept during her time in the Czech camp and then again following liberation. The diary is illustrated with her own paintings and one is included below. She is an accomplished artist. She described the importance of having been able to stay with her mother during her time in the camps and also how being able, against all odds, to write when in Terezin, she used this activity as a means of having privacy in appalling conditions.

Following liberation she returned to Prague, managed to get back the family apartment and has continued to live there until now. When asked if she had considered emigration at any point, she revealed that she had twice considered it - once in 1948 when she had thought of leaving for Israel and again in the 1960's when her husband, a musician, had offered her the opportunity to leave for Denmark, where he was working. She decided against leaving both times, not wishing to separate from her mother.

A member of the audience asked her if her writing was a form of healing. She replied that psychologists have said that writing about strong feelings helps to get rid of them. She went on to say "I don't much believe psychologists". Eminent Holocaust historian David Ceserani chaired the panel and noted that at the end of her book, Helga wrote "I never left Terezin" describing the impossibility of true return after such experiences.

After Helga's session, I moved on to hear Edmund de Waal speak with obvious emotion about his grandmother, Elisabeth, who born into an extremely privileged Viennese Jewish family in 1899 went on to achieve much as Austria's first woman lawyer but whose first love was really books and writing. Astonishingly as an 18 year old girl she commenced a correspondence with the poet Rilke who sent her copies of his works, one of which de Waal held on the stage during his session.

Elisabeth left home for a Bohemian lifestyle in Paris, mixing with artists and writers until the late 1930's and the Anschluss of 1938 when Germany annexed Austria to the approval of the vast majority of Austrians. Persecution of the Jews began immediately with arrests and imprisonments in Dachau and other camps, exclusion from public life, violent assaults in the streets and confiscation of Jewish possessions. At great personal risk, Elisabeth, now married with two sons, returned alone to Vienna to bully, bribe and cajole Nazi officials in order to secure the exit of her family from Austria. They eventually made their home in (of all places), Tunbridge Wells in England where Elisabeth saw out her days, having converted to Anglicanism but continued to surround herself with books in the nine languages in which she was proficient.

Elisabeth wrote fiction throughout her life. We are aware of three novels in English and two in German - none of which were ever published. de Waal spoke about his amazement at having been handed the manuscripts of her books by his father and the journey that this resulted in, taking him across Europe looking for clues about his family history. Elisabeth's unpublished book "The Exiles Return" is the story of Jewish exiles returning to post war Vienna looking for the life they knew before, in some cases finding people they had once been friends with, but facing rejection, embarrassment and in most cases downright lies about the activities of the Viennese during the war years, with no-one willing to admit their very recent Nazi past.

de Waal spoke about his anger at the publishers' rejection of his grandmother's manuscript but also understood the odds stacked against its being published in the 1950's - the work of a woman, with a foreign name and at a time when very few people want to talk about the impact and aftermath of the Holocaust. Something not examined in the session, but which struck me afterwards was that Elisabeth's book and her experiences (which are obviously those of the book's characters) reflect the continuing inability or unwillingness of Austria and Austrians to face up to their culpability for the Holocaust. Instead, for the most part, choosing to hide behind the facade of victimhood as "Hitler's first victims". Footage of the entry of the Germans into Vienna in March 1938 and the cheering, saluting crowds give the lie to this. Elisabeth's book was eventually published due to de Waal's perseverance and the commitment of Persephone books. I began to read it yesterday and am already hooked.


Earlier in the week I attended an unusual event called "And Europe Will Be Stunned". It involved a screening of a short trilogy of films by Israeli born film maker Yael Bartana, and then a panel discussion. The films can be viewed on a number of levels but at the heart of them there is a plea for "the other" to "return" to Poland. We see a classic, dictator-like blonde Pole in the centre of a deserted and overgrown football stadium making a plea for 3.3 million Jews to come to Poland as Poland "needs them" (see clip below). He says the Poles are lonely in their homogeneity and that they were wrong in pursuing an entirely "Polish" nation for so many centuries. The empty stadium, the ghostly setting for his speech symbolises the absence of Poland's Jews - either murdered during the Holocaust or driven out by subsequent waves of state sponsored anti-semitism.

The second and third films show the partial realisation of this dream of return and are filled with symbolism and historical and political references. A group of returning Jews construct a model kibbutz in Warsaw next to the site of the Ghetto Fighters Memorial. Instead of flying a blue and white Magen Dovid over their new home they fly a new flag with the Magen Dovid superimposed over a red and white Polish eagle. The strangely familiar music played during parts of the second film turned out to be Hatikva being played backwards and we see Hebrew being replaced with Polish.

The panel discussion afterwards which included the main actor from the films,  Slawomir Sierakowski, author Eva Hoffman and Polish Jewish intellectual Stanislaw Krajewski, debated the meaning of these references - some seeing them as an attack on Zionism - the backwards playing of Hatikva and the learning  of Polish as an undoing of Zionism. Others recognising the red and white flag as a reference to the Jewish blood shed in Poland whilst the barbed wire around the new encampment was recognised as a reference to the extermination camps of the Second World War. The panel also debated how much the films  were about Poland with at least one strong opinion that the film was really more about Israel. The films are easy to find on the internet so you can judge for yourself.

On a completely different note, one of my highlights of the week so far was listening to Fania Oz-Salzburger talk about"Jews and Words" the book she co-authored with her father, Amos Oz. In their book they argue that text rather than blood is what kept the Jews together through centuries of dispersal and that the dinner table conversations that helped conceive this book are the continuation of a long history of Jewish disputation between generations. Furthermore, she argued that it is essential to have books at the dinner table in order to support these arguments. This too is a Jewish tradition reaching back many generations where the father and children would sit at the table reading or being read too whilst the mother was preparing food before she too joined them in this bookish atmosphere, often despite extreme poverty.

Ms Oz-Salzburger reminded us of the image of the fleeing Jew - leaving home and possessions at a moments notice, clutching a child in one arm and the precious books in the other, with the child and the texts ensuring Jewish continuity. She described books as "our Noah's ark" - the things that rescued Jewishness, although not necessarily religious Judaism. She believes Jews remained Jews because of a shared story and law set out in the Torah, Talmud, Mishnah and other texts, that can even speak to atheist Jews such as Oz and her father. I liked her description of the texts as "our pyramids, our Chinese wall and our gothic cathedrals".

She is from a literary dynasty, her father being perhaps the greatest and best known living Israeli writer and she is conscious of being part of a great tradition. This has not prevented her from embracing modernity. She loves the internet, Facebook, texting and all of the technology that now supports the spreading of words. She reported that her father hates it and becomes annoyed when he sees his work being read on an i-pad! Fania described the internet as being a Jewish text, offering the opportunity for disputation, learning and passing on stories for future generations.

It was interesting to hear that the book has been attacked by both the anti-religious left who are unable to understand why the Oz family would engage with such a subject and the ultra religious right who think they don't have the right. She joked that she was happy to have helped bring these two groups together on at least one issue! Another must read I think. 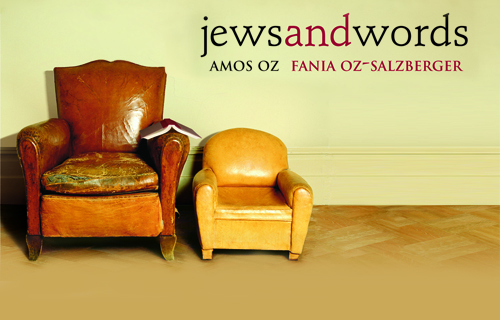