A Jewish presence has been noted in this area since at least the thirteenth century, but this town was created in the 18th century by the Khan of the Quba region, one Feteli Khan. In 1742 the Khan gave permission for the "Mountain Jews" to set up a community free of persecution within his area of jurisdiction. The Mountain Jews of the Caucasus region (who also live in Georgia and Dagestan) have unique traditions. This includes a musical tradition that has been protected and recently brought to a much wider audience by Piris and Mark Eliyahu who originate from Dagestan, and who have worked closely with Azeri musical legends, father and daughter Alim and Fargana Qasimov.


The Eliyahu brothers performing in Jerusalem

Krasnaya Sloboda is a very quiet place these days. About half of its residents work abroad in America, Russia or Israel and when I visited there were very few people in the street. There are many new houses here, almost entirely built by and for people who live here for only part of the year. There are two working synagogues, whilst a third is being rebuilt to the design of one that was demolished a few years ago for safety reasons. There are a few other interesting buildings in Krasnaya Sloboda, including the former maternity hospital which is now closed Pictured below). The few births taking place in this community now happen on the other side of the river in Quba where there is a modern hospital. As elsewhere in Azerbaijan, I was struck by the similarities between architecture here and in the rest of the Caucasus.

After being asked "Are you from America...from Israel?" I managed to exchange a few words with some of the the residents - although they speak little Hebrew and I have no Russian or Azeri. Many are unemployed and they asked me if Jewish people have jobs in England. The town left me feeling a little sad - it seemed almost deserted and it was strange to know that there would be very few people in the houses of the streets I wandered through. Ironically one of the largest buildings was the "Wedding Palace" - another common site in Azerbaijan. People tend to have many guests at their weddings and so there are purpose built venues. This building seemed large to me but I am reliably informed it was of medium size and that there are others where hundreds of people can be accommodated! I wondered how often the Krasnaya Sloboda wedding palace gets used. 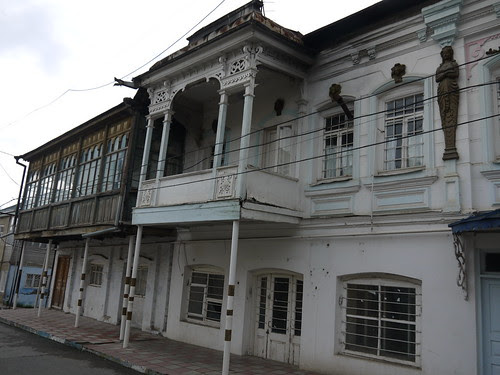 On the hills above the town, there is a Jewish cemetery, which is interesting due to the local community's adoption of the Soviet tradition of placing images of the deceased on the gravestones. The cemetery has spectacular views over the surrounding countryside. There are wild pear trees in the grounds and the non-Jewish caretaker invited me to take fruit straight from the tree. Crunchy and sweet. The pear that is.

Quba, the main town in this area lies just across the river from Krasnaya Sloboda. I stayed the night there at a small but comfortable hotel called The Gallery. No-one in the hotel spoke English. I like a hot drink and something sweet to eat before I go to bed, so I went to the hotel's small cafe and managed to ask for "chai"  the ubiquitous black lemon tea so popular with Azeris. That bit was easy, but how was I going to ask for something sweet? My technique included pointing at the sugar bowl and making eating gestures which the three young men working in the cafe initially found hilarious then realised what I wanted. They kept saying "esnickers, esnickers" before bringing out a tray of "Snickers" chocolate bars. Interestingly you could buy a whole bar or a half bar - some had been cut carefully in half and wrapped to keep them clean. Regular readers will not be surprised to know I had a full one!

So, happy with my tea, "esnickers" and book I sat for a while whilst the three young men watched an Azeri horror movie on the flickering cafe TV. Azeris are welcoming people and they continuously pointed at the screen and laughed - at the film I think (hope), rather than at me, before going into a deep and serious five minutes conference during which I returned to my book. A few minutes later the oldest of the three brought a small plate with a freshly washed nectarine and a knife and set it in front of me with a "for you" gesture, a big smile, touch of the heart and an announcement that it was from "Guba, Guba". I felt very looked after.

I was to get a taste of even fresher food the next day as my guide drove me into the Cloud Catcher Canyon - which does exactly what it says it does. It is a deep gorge, beautifully green at the time of my visit, into which those fresh, silky Caucasus clouds descend. On a hill overlooking the gorge, I was able to eat walnuts straight from the tree. My guide, Gurban, who had been brought up in this part of the country showed me how to dislodge the ripe walnuts by using a stick to shake the branches of the tree before cracking the nuts with a stone. Delicious. A little later I was able to wash the walnuts down by drinking directly from a small waterfall within the Canyon - reminding me of similar experiences when I visited Georgia and Armenia back in 2008.

Whilst on the subject of nature, I was fascinated by the mud volcanoes that I visited in Gobustan, about an hour's drive from Baku. These small (mostly no more than three metres high) "volcanoes" are triggered by underground methane, which you can hear hissing as you walk around the site. You can also smell it - it has a chemical type smell, rather than anything else you might have thought of. The mud is cold - so it doesn't burn if, like me, you happen to be photographing one of them when it erupts. The mud is said to have medicinal qualities and to be good for the skin. Maybe so. I know my t-shirt washed up nicely after being covered in it! It could have been worse, a larger mud volcano hit the headlines in 2001 when it erupted throwing flames 15 metres into the air! The wet mud at the top of each volcano resembles thick liquid chocolate, whilst the "lava" trails leave interesting swirls and patterns as they spill over the crater. 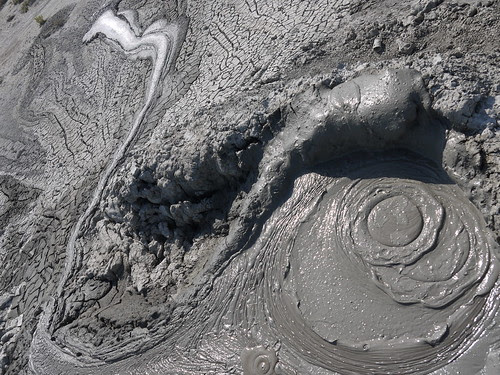 Azerbaijan is known as the Land of Fire. One of the reasons for this is the large number of "burning mountains"primarily in the south of the country, however the most accessible of these is Yanar Dag (burning mountain) close to Baku on the Absheron peninsula. "Mountain" is a bit of a misnomer, but sure enough there are flames coming from this hill where natural gas from the oil-rich soil was accidentally ignited more than 50 years ago and has been burning ever since. I went during daylight but I am told that a visit after dark is best as this is when the flames are at their most visually impressive.

Continuing the fire theme, and also on the Absheron peninsula at Surakhani, is the Ateshgah Fire Temple (pictured below), built by Indian fire worshippers in the eighteenth century, although this was pre-dated by another temple about which little is known. The temple would attract devotees from across the middle east and from as far away as India. A natural flame burned here too for many years but the gas pocket that fed it is now used up and the flame is nowadays fed by a mains supply. When I visited, the Temple was under fairly serious restoration, with a planned visitor centre. Nothing too "flashy" I hope. 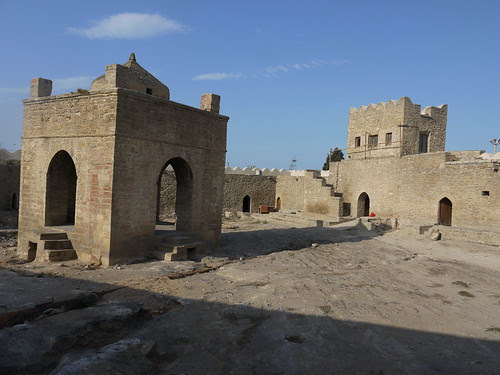