Exploring Jaffa part one - The Fleamarket

I visit Tel Aviv every year. I always stay in the city centre in my favourite hotel - The Center Chic at Dizengoff Kikar, but this time I am here for a whole month and decided to do something different. I have taken a room in a beautiful old Ottoman building in Ajami, just a short walk from the centre of Jaffa and within easy reach of central Tel Aviv. Of course, I have visited Jaffa many times before, but staying here has given me the chance to really explore this fascinating and rapidly changing part of the city. 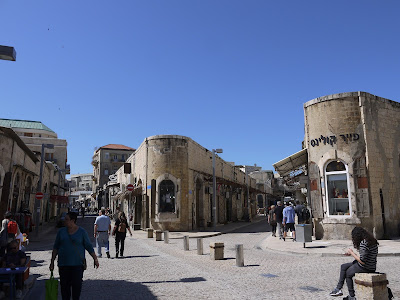 The Fleamarket (Shuk Ha Pishpishim in Hebrew) is Jaffa's commercial heart and the area most visited by tourists and locals alike. Built in the nineteenth century on land belonging to the Greek Orthodox Church, it was once extremely luxurious with wide streets and marble walls. Some of that luxurious feel is returning as the market has changed enormously in recent years. You can find just about anything ranging from second hand clothes to brand new designer items and from cutting edge local design to pots and pans that have passed through many homes as well as eateries that cater to all tastes and wallets. A few steps from the centre of the market you will also find the studios of artists and designers, some of whom sell their work here too. The traders come in all shapes, sizes and ages too and range from a very young, very stylish crowd designing their own goods to elderly women overseeing second hand (or third, or fourth) clothes strewn on the floor for picking through.

I have some favourites. I like eating ice cream and drinking coffee in Shaked on at Yehuda Margorza 8, and I like the chicken livers and lentil dishes at Cafe Pua at Rabbi Yochana 8. On the subject of eating, you can find many cuisines in the market including Greek, Arab, Bulgarian and Italian and also fish, meat or dairy establishments. Several are non-Kosher so  seafood devotees don't need to go hungry and several now stay open on Shabbat. Everyone has their favourite eating place but Doctor Shakshuka at Beit Eshel 3 is a perennial favorite and can attract queues at busy times. Shakshuka is a traditional dish amongst Libyan Jews and consists primarily of tomatoes, eggs, onions, peppers and various spices. The restaurant is owned and run by a family that originates from Tripoli in Libya. Many Libyan Jews once lived here. Proof of this includes the presence of the Libyan synagogue in Jaffa's old city and another Tripolitania restaurant on Jaffa's boulevard, Sderot Jerusalem which will be the subject of a separate post. 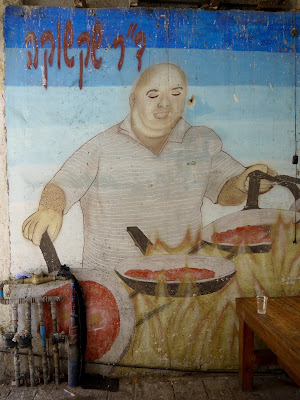 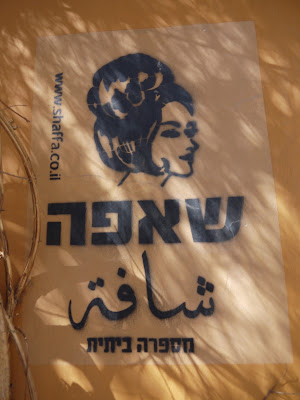 I also like spending time browsing the delights of shops such as the concept store In Another Time at Ole Zion 26, where I recently found a Hebrew version of Tom Sawyer from the 1950's, some fantastic metal street advertising signs for Dubek cigarettes from the same period (probably designed by the Shamir brothers) and a great selection of Israeli, French and Turkish film posters. Palestine Eretz Israel at Ole Zion 8 is even more serendipitous and is crammed full of old photographs, postcards, maps, lamps, kitchen equipment and many objects of uncertain use, almost all of which have a story behind them. There is so much stuff in the shop that it can be difficult to move but it's one of the most fascinating places in the market and well worth breathing in whilst you browse. One thing to note, and there is a real note pinned to it to warn you - the vintage motorbike out front is not for sale and is used by the owner. So don't ask. Collection at 19 Yehuda Margoza is a good place to pick up gifts and stocks Israeli designed stationery, soaps, items of clothing and various items for the home. 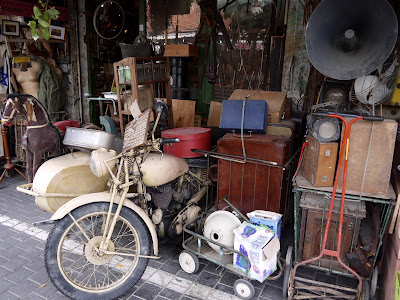 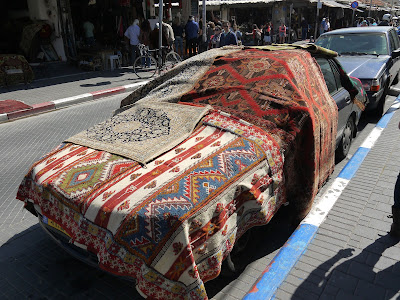 Many of the shops and all of the bars and restaurants stay open late into the night and large crowds of younger people gather at the informal eating and drinking places in the market's alleyways. The relatively small size of most of these places and the proximity of vintage furniture and fittings in the market makes for an interesting evening out with a very different atmosphere to some of the more corporate style bars found in big cities all over the world. The recent success of the market appears to be built on the combination of retail and catering - an approach tried and tested elsewhere too.

As well as sampling the food and browsing the shops, I like to wander through the alleyways and streets at the north end of the shuk. There are many artists' and craft workers' studios here and on Friday mornings you can see groups of artists out drawing or painting street scenes. I love the crumbling architecture in this section, especially the buildings with the curved ends that meet at the junction of Yo' Ezer Ish Habra and Rabbi Pinchas Ben Yair streets Pictured at the top of this post). This area is not officially part of the flea market and was originally known as the Greek Market. Founded in 1905 it is bordered by the Clock Tower Square and Beit Eshel the main street of the flea market. This market was built under the direction of Greek Orthodox Patriarch, Avitmos who was also responsible for a similar development in Jerusalem in the same year. There are still Greek letters above one of the entrances to the market. 15-17 Beit Eshel Street is the site of the former Manuli's Khan. Built in the 1860's and named for its original Armenian owner, it became a commercial hub for the expanding Jewish community during the 1880's and guests at the Khan would consult Hebrew newspapers and discuss political issues of the day. 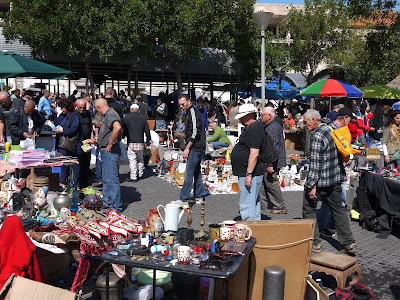 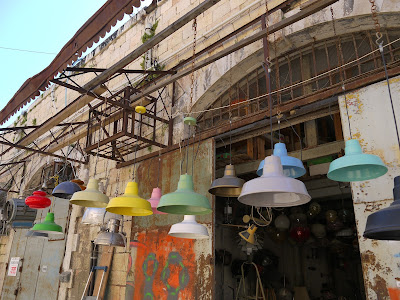 If further proof was needed that the market is changing, you can even find a boutique hotel here.  If you want to stay in the centre of things, the Market House Hotel at Beit Eshel 5, is in a beautifully refurbished Ottoman era building with an elegant lobby where you can also see the archaeological remains of a Byzantine Chapel through a glass section of the floor. Non-guests are welcome to have breakfast at the hotel and it's very good - I know because I've tried it. There is also a small take-away coffee shop and bakery within the hotel where all kinds of treats can be had. Perhaps the best thing about the Fleamarket is the atmosphere and that's best experienced by strolling its streets and alleys at a leisurely pace, listening to the banter of traders with customers and remembering of course to also look up so as not to miss the beautiful balconies and windows of old Jaffa. 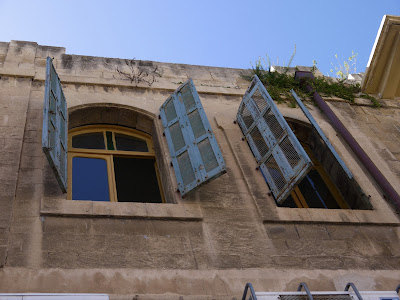 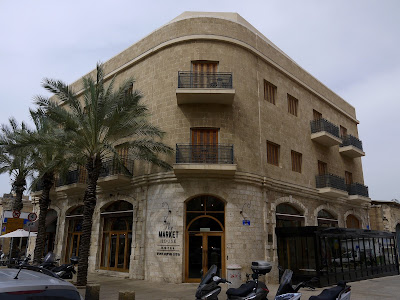