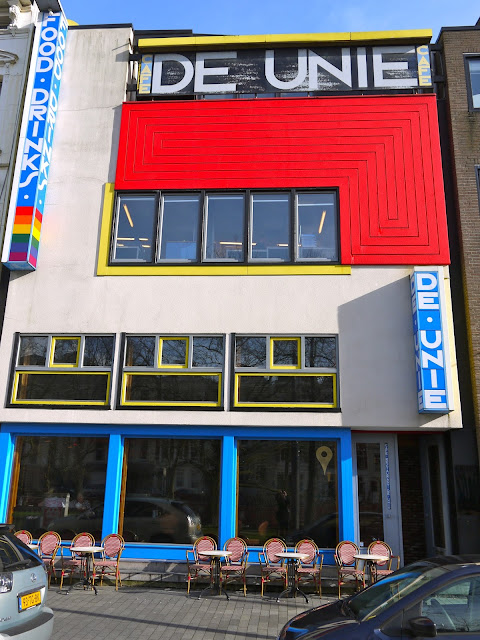 Cafe de Unie opened in 1925 on Coolsingel, in the centre of Rotterdam. The striking facade with its bright blue, red and yellow colours is a typical De Stijl design, bringing to mind the works produced by artist Piet Mondrian in the 1920's.  Cafe de Unie was the work of J.J.P. Oud who was commissioned by Rotterdam Municipal Housing to design a temporary structure to plug a gap between two larger nineteenth century buildings. It was intended that the building would stand for ten years and then be demolished.

Strikingly modern, the building was in sharp contrast to its neighbours and was not well received by everyone. Architect, painter and designer J. Verheul was particularly offended, going so far as to say "a more outrageous disfigurement of a street front is in my view inconceivable". Fortunately this was not the opinion of all of Rotterdam's residents and the bright colours, stylised lettering, illuminated signage and vertical letterbox, the cafe attracted a loyal following. 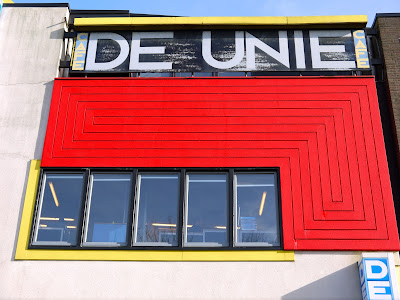 De Unie outlived its intended ten years but was destroyed during the German bombing of May 14th 19401 that reduced much of the city to rubble. However, that was not the end for the cafe and in the 1970's, discussion started about re-creating the building. A proposal was developed to rebuild on Oude Binnenweg but in 1986 it was reconstructed at Mauritsweg 35. For a number of years the cafe also delivered a programme of cultural activity in the auditorium at the rear of the building.


Oud was one of the leading modernist architects of the 1920's and 1930's having been one of the participants at the Weissenhofsiedlung exhibition in Stuttgart in 1927 and was considered to be in the same league as Le Corbusier, van der Rohe and Walter Gropius. Following the Weissenhofsiedlung exhibition which modelled a new approach to social housing, Oud was responsible for a working class housing project in Rotterdam - the Kiefhoek estate completed in 1930 and which I will write about separately.

In later years his work attracted criticism for his use of decorative features, felt by some to be in conflict with the spirit of modernism.  It is interesting that Oud had already left the De Stijl group by the time he designed the cafe's facade, having quarrelled with Theo van Doesburg, the group's leader. He also designed another building in this style - the manager's hut at Oud Mathenesse. The hut was also intended to be temporary but still stands and although less well known than de Unie, it is considered to be a textbook example of the De Stijl movement.

Although the original building is gone, the new de Unie gives visitors the opportunity to see something of 1920's Rotterdam. And just as important, I enjoyed my coffee and cinnamon biscuits there earlier this week...