Ladybird By Design, the exhibition currently showing at the House of Illustration in Kings Cross brings back many childhood memories for me. I was an odd child, interested in books, maps, history, the world and things that seemed very exotic and inaccessible to a child growing up in a small seaside town in the North-East of England. I don't remember there being many books in our house and we were not regular library users, which is odd given my later career path. However I do remember having a small number of Ladybird books which were probably purchased in the town's branch of WH Smith and which were treasured possessions to the extent that I remember taking them to school to show my teacher and her being a little surprised to find me reading Warwick the Kingmaker! 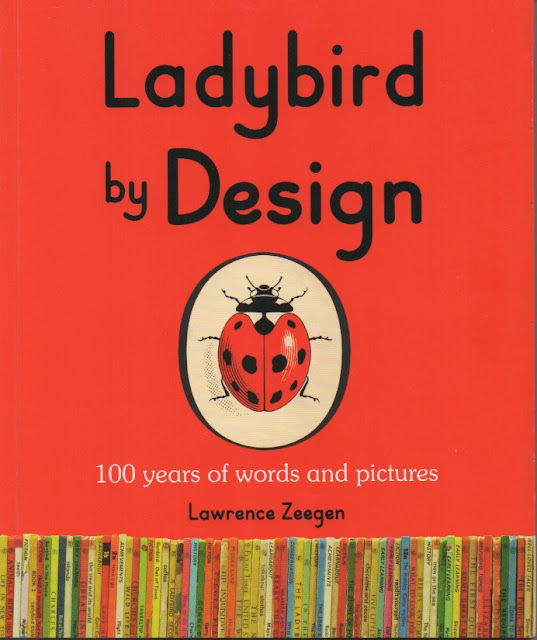 Ladybird publishing celebrates its centenary this year. I must admit I was surprised to learn that the company is still with us and still producing children's books. The iconic ladybird logo was registered in 1915 by Loughborough printers Wills and Hepworth who experimented with producing illustrated books with an educational focus for young children but the fifties and sixties were the golden age of Ladybird publishing for children. Produced to a winning and at the time ground breaking formula, the books featured one page of text followed by a full page illustration, no matter what the subject. Editorial director, Douglas Keen recognised the importance of layout and illustrations and commissioned leading artists and illustrators for the many series published by Ladybird.

Keen was the reason for much of Ladybird's success during its golden age. He first worked for Wills and Hepworth as a salesman in 1936 and returned to the company in 1946 after spending six years in the RAF as part of a mobile radar unit during the Second World War. Traveling widely as a company rep he spoke to teachers and booksellers to discover what kind of books British children wanted and identified a need for well illustrated, easy to read factual books. Convincing his employers that this was worth pursuing through producing a prototype books on birds, illustrated by his mother-in-law and producing the text himself, he laid the foundations of a phenomenally successful series of books.

As well as producing interesting non-fiction for children, Keen oversaw the production of the Key Words reading scheme series, which may seem old fashioned now, but which was used to teach many children to read from the late 1940's until the mid 1970's, not just in the UK but overseas as well. One of my friends from the Far East reports learning to read with this series under the direction of parents and starting school already literate. I am not one of those many children taught to read with this scheme. I was damned to the boredom of the Janet and John series and its dire text. I can still remember some of the text from those books - "Look John look, the dog has the ball, the ball goes up up up". Tedious in the extreme and I often wondered why the ball never came down down down, but I did learn to read as did thousands of other children with schemes such as these.

It is easy to underestimate how revolutionary these books were. Children's publishing today is bright, colourful and exciting but until the early 1960's many books for this age group were fairly dull with dense text and limited, often poor quality illustrations. I remember ploughing my way through a copy of the Water Babies at age 10 or 11. Not a picture in the book and very long passages without obvious places to pause - it was a miracle I got to the end of it, especially as most of it was read after lights out by holding the corner of the curtain open with one hand to let light in whilst holding the book with the other.

Over time Ladybird developed a wide ranging list with series on historical figures, travel, machines, people's jobs, Bible stories, achievements, fairy tales retold, science and of course animals. The natural history books were particularly charming and designed to promote a love of natural history amongst children. I particularly liked the "What to look for.." series with one each for winter, spring, summer and autumn. This series was illustrated by Charles Tunnicliffe a well known hand much respected painter of birds and animals. A further wildlife series was published in 1972, with a focus on conservation included "Disappearing Mammals" and "What on earth are we doing" amongst the titles. Disappearing Mammals commented that "Man has no right to rob future generations of the interest, inspiration and beauty that can be had from contacts with animals". It is fashionable in some circles to sneer at publishing from this period as old fashioned or as having a narrow view of the world. Some of these books stand up rather well to this kind of criticism when closely examined.

However, the travel books are perhaps not so able to stand up to this kind of scrutiny. The Flight series included six titles - Australia, Canada, USA, India, Africa and the Holy Land. I was the proud owner of at least three of these - India, the Holy Land and Africa. This series featured Alison and John, a brother and sister who appear to have been frequent flyers with their businessman father. Published in the early 1960's this kind of travel must have seemed enormously exciting for most British children and something few could aspire to. These children were well behaved and quite serious - John took notes in his notebook, Alison did drawings of where they had been and at least in the case of the Holy Land title, was constantly armed with her Bible from which she would read about the places they visited. The father was very engaging, asking the children lots of questions and explaining key moments in the history of the places visited. 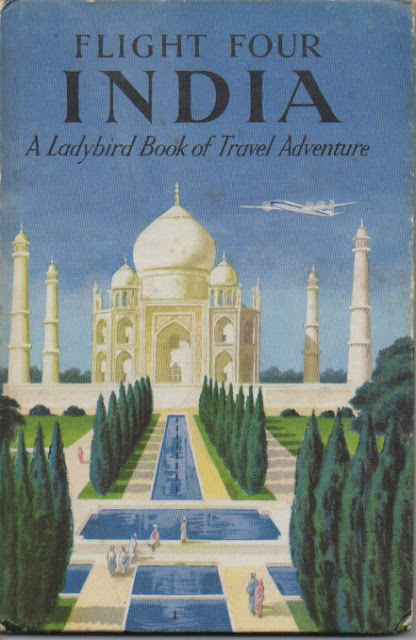 This series has received particular criticism. The family see the world from a very white and very British point of view. The depiction of local people in the books in a number of cases would not be acceptable today - a theme further developed in the way women are dealt with in other series. Over time this began to change, especially during the late 1970's and beyond but by that time the bubble had burst, children's publishing had changed and the Ladybird approach had become old fashioned.

Despite this very British approach, the books were translated into a number of languages and were successful overseas. The books have been translated into up to 70 different languages as diverse as Arabic, Chinese, Icelandic, Malay, Swedish, Welsh and Zulu. At least some were translated into Esperanto - the international language created by I.L Zamenhof in 1887 (and which never took off) whilst others were produced using ITA - the initial teaching alphabet which was a method of teaching reading popular in the 1960's.

Marketing was a key element to the success of the books with Ladybird being one of the first lists to produce its own point of sale and promotions material. The exhibition at the House of Illustration includes a letter from a bookseller asking for more such material and a different range of books to display having sold out his previous stock.

Things change. The world moves on and Ladybird has developed and modernised its approach whilst keeping some of the key features of its early success.  I recently re-purchased a couple of titles that I once owned - Flight Four - India and Flight Six - The Holy Land. I spotted them on Amazon for a couple of quid each and couldn't resist having another luck. Dated yes, innocent seeming certainly, but they still carry a certain charm and innocence and it is not difficult to see how children of the pre internet, i-Phone, modern picture book and Harry Potter age would be drawn to them.


The exhibition runs until 25th September and the gallery shop is selling old and new ladybird titles as well as postcards, posters produced for the exhibition as well as the new book by Lawrence Zeegan Ladybird By Design. 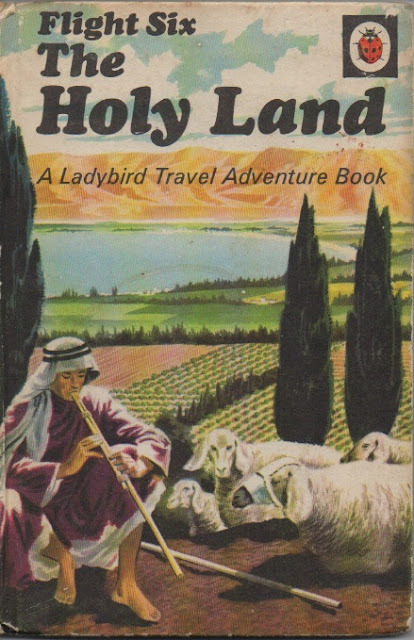 Email ThisBlogThis!Share to TwitterShare to FacebookShare to Pinterest
Labels: Books, Exhibitions, House of Illustration, Ladybird by Design, My London