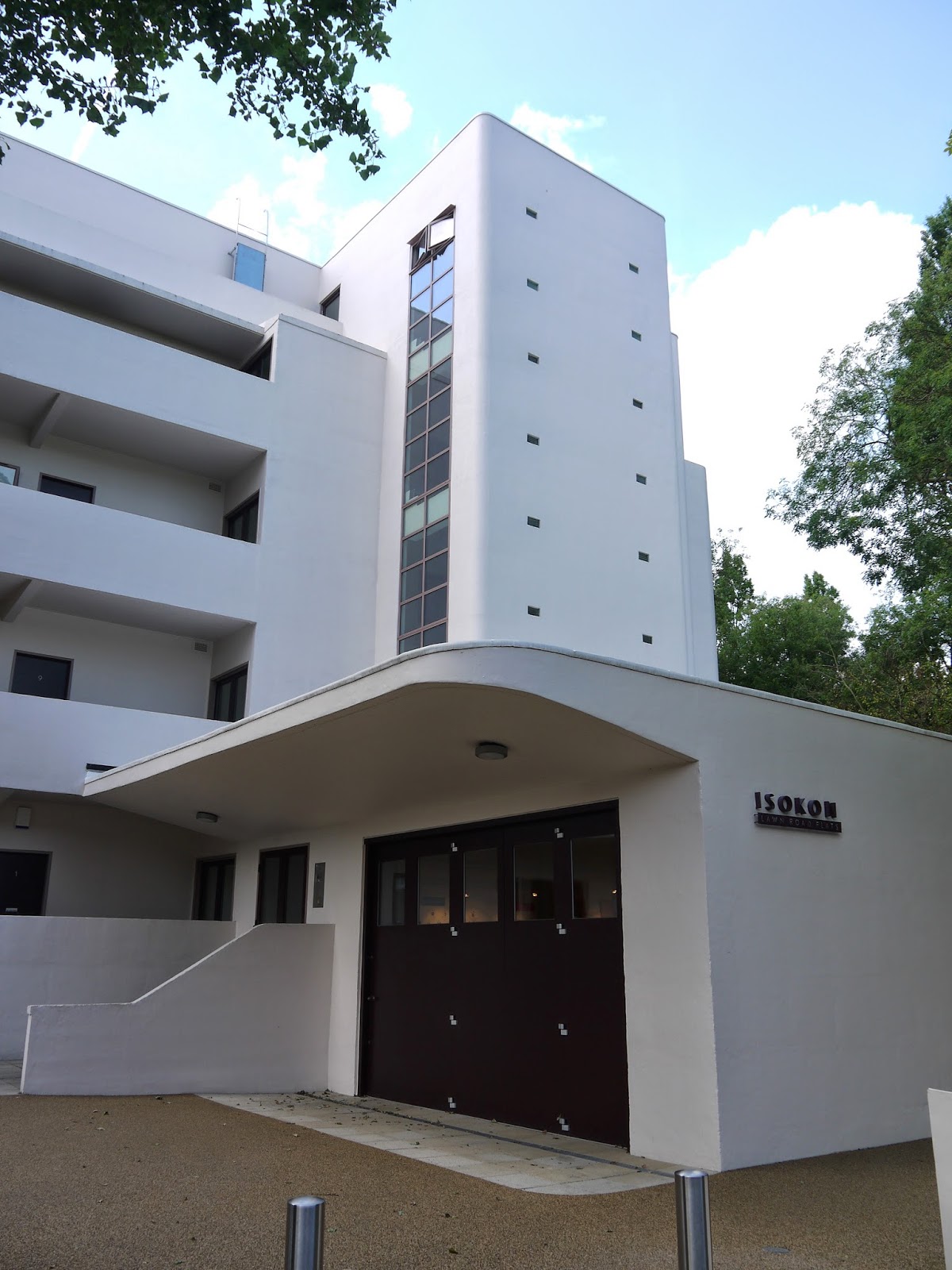 During the 1930's Hampstead was home to artists of all disciplines including many architects committed to the modernist agenda. As well as homegrown talent, several architects were refugees from Germany, Austria and the former Czechoslovakia as increasing restrictions were placed on Jews in particular, and more generally on those who opposed Germany's Nazi regime.

I have already written about Erno Goldfinger's modernist home at Willow Road whilst nearby Belsize Park is home to the modernist masterpiece known as Isokon Flats. Completed in 1934, the flats were designed by Canadian born and British based architect Wells Coates. The block was commissioned by Jack and Molly Pritchard - he an entrepreneur, her a bacteriologist and psychiatrist and both of them committed modernists. The Pritchards established their own company, Isokon, which aimed to produce homes, furniture and fittings in units designed by Coates who was fond of isometric drawings, hence the name of the company, taken from the term Isometric Unit Construction.


Wells designed a block of 34 furnished flats over four floors with two rooftop penthouses. The flats were built from reinforced concrete with a cement wash render. The main features include a five storey tower with stairwell access to each floor, lit by a narrow but extremely elegant vertical window reminding me of some of Tel Aviv's best modernist buildings. However, the highlights for me are the stunning cantilevered balconies facing Lawn Road. The glowing white exterior stops unsuspecting passers-by in their tracks, half way down a very English residential street in this part of Hampstead. Adjacent to the stair tower at ground floor level, there are garages presented at right angles to the main footprint of the flats.

Recently, an exhibition space has been opened at ground floor level. The Isokon Gallery has an exhibition relating to the history and philosophy of the building as well as some items of furniture from the 1930's and information on some of famous (and infamous)  residents. You can buy a map showing the location of other modernist buildings in the area for just one pound (bargain) as well as browse a great selection of books on modernist architecture and some tempting merchandise.

The original interiors were designed to be minimalist with space saving furniture and fittings, fitted kitchens, bathroom, dressing room and bedroom. Echoing Soviet practice in experiments in communal living (for example the Narkomfin building), there was a communal kitchen, later converted into the Isobar restaurant. Unfortunately, the restaurant closed in 1969 and was converted into flats. Originally private, the building was acquired by Camden Council in 1972 before coming under the ownership of the Notting Hill Housing Trust. It was granted Grade 1 listed status in 1974 which is the highest listing possible, but was neglected over several years and began to deteriorate. A sympathetic restoration in 2003 restored it to some of its former glory and it now provides accommodation for key workers.

Not only architecturally outstanding, the flats have been home to some very famous people. Writers Agatha Christie and Nicholas Monserrat lived here in the 1930's and 1940's as did modernist icons Marcel Breuer, Walter Gropius and Laszlo Moholy-Nagy and many other less well known artists, writers and architects. The flats achieved a notoriety in later years when it became known that at least a dozen residents (and probably more) had been involved in spying for the Soviet Union, including Melita Norwood who worked for the Soviets undetected for 39 years - longer than any other known spy in the UK! If walls could talk…

You can also visit my Facebook site - Art Deco and Modernism around the world
Posted by Yekkes at 18:19