Nahum Gutman and a newspaper for children

One of my favourite Jerusalem experiences is browsing in a tiny book shop called Trionfo in Dorot Rishonim Street. Located just off the busy pedestrianised Ben Yehuda Street, Dorot Rishonim is also home to a great new hotel - the Arthur, a good new kosher humous restaurant - Abu YoYo and a small bar called Birman that has either live music or dancing every night. I discovered Birman on my most recent visit when I heard music floating up from the street to my room in the Arthur before going along to enjoy a local quartet play some very cool versions of jazz standards the next night before watching some great swing dancers the night after. All for free! 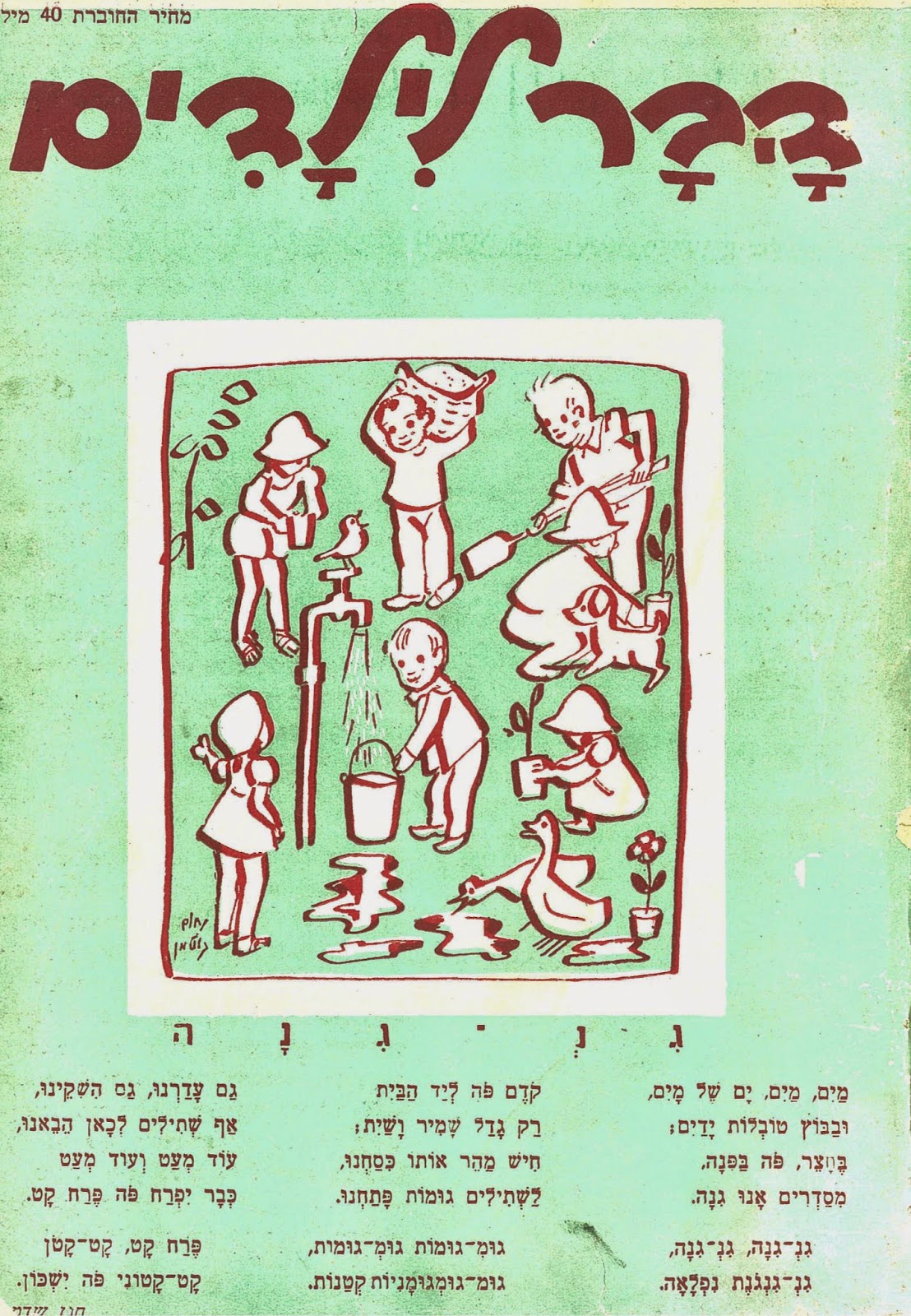 The music (and the humous) were both great but back to Trionfo. Thanks to owner Abraham Madeisker, I have become the proud possessor of works by various Bezalel artists including Zev Raban's illustrated books and playing cards and books illustrated by another early giant of the Israeli art scene - E. M. Lilien. This time was no exception and I came away with two copies of the children's supplement from the former Davar newspaper, Davar l'yeledim (דבר לילדים) - or Davar for children.

Enormously popular with Israeli children at the time, it was filled with stories, quizzes, crosswords and articles on many different subjects. The copies I purchased include pieces on the Gilboa region, summer in the desert and a regular item called "letter from the camps" with news about the activities of children living in Ma'abarot refugee camps set up to absorb Jews forced out of North Africa and the Arab Middle East in the 1950's. In some parts the text is dense and the technology at the time was very different to that available for modern magazine production but the illustrations are charming and it is easy to see why this publication would have engaged so many children.

Davar was the official newspaper of the Histadrut or Labour federation. Founded in 1925 by Berl Katznelson, it was the most important newspaper of the labour movement.  Katznelson wanted Davar (which means "word") to be informative and educational and to "quench the worker's thirst for knowledge and thought". Despite Katznelson's initial hopes that the newspaper would be free of control by any political party, it became the organ of Mapai, the ruling party throughout the 1940's, 50's and 60's whilst two of its editors rose to the very pinnacle of politics, Moshe Sharrett and Zalman Shazar eventually becoming Prime Minister and President respectively.  Despite its early popularity, it struggled from the 1970s onwards, amalgamating with a other newspaper in 1971, changing its name to Davar Rishon in 1995 and finally closing in 1996.

Most of the illustrations in Davar l'yeledim were the work of famed Israeli artist Nahum Gutman. Born in 1898 in Teleneshty, Bessarabia (in today's Moldova), his family moved to Odessa in 1903 before making aliya to Eretz Israel in 1905. Gutman's family were amongst the first residents of Tel Aviv having initially lived in the Neve Shalom neighbourhood. He studied art at the Bezalel and in the 1920's spent some time working and exhibiting in Paris and Berlin. Returning to Eretz Israel in 1931, his work was inspired by the country's landscapes and people and included mosaics, stage sets and sculpture as well as painting and book illustration. Many of his works can be seen at Beit Gutman in Tel Aviv's Neveh Tzedek which acts as a museum to his life and work.

Gutman had an affinity with young people, writing and illustrating several children's books, but it was his work for Davar l'yeledim that endeared him to more than one generation of Israeli children. In a Beit Gutman publication, his son, Hemi remembers the weekly delivery of what was referred to as "the stuff" to their home - an envelope containing manuscripts for the next edition of the newspaper and for which the artist had three days to prepare the illustrations for stories and poems. He remembers feeling privileged that he knew what happened in each serial an entire week before everyone else! He also remembers that his father would "…address each child in a genuine, friendly way, whether it was on the street, on the bus, or in a crowd of a hundred kids who regarded him as a walking wonder". He also remembers feeling jealous of this affection saying that "during those encounters, all the empathy, the jokes and the witticisms that had always been mine alone were generously and profusely handed out to all the children…"

In today's technological age where the opportunities for interaction are endless but much less personal, Gutman's approach and Davar l'yeledim may seem quaint but together they instilled many children with a love of reading, many of whom retain fond memories of the weekly episode of their favourite serials. 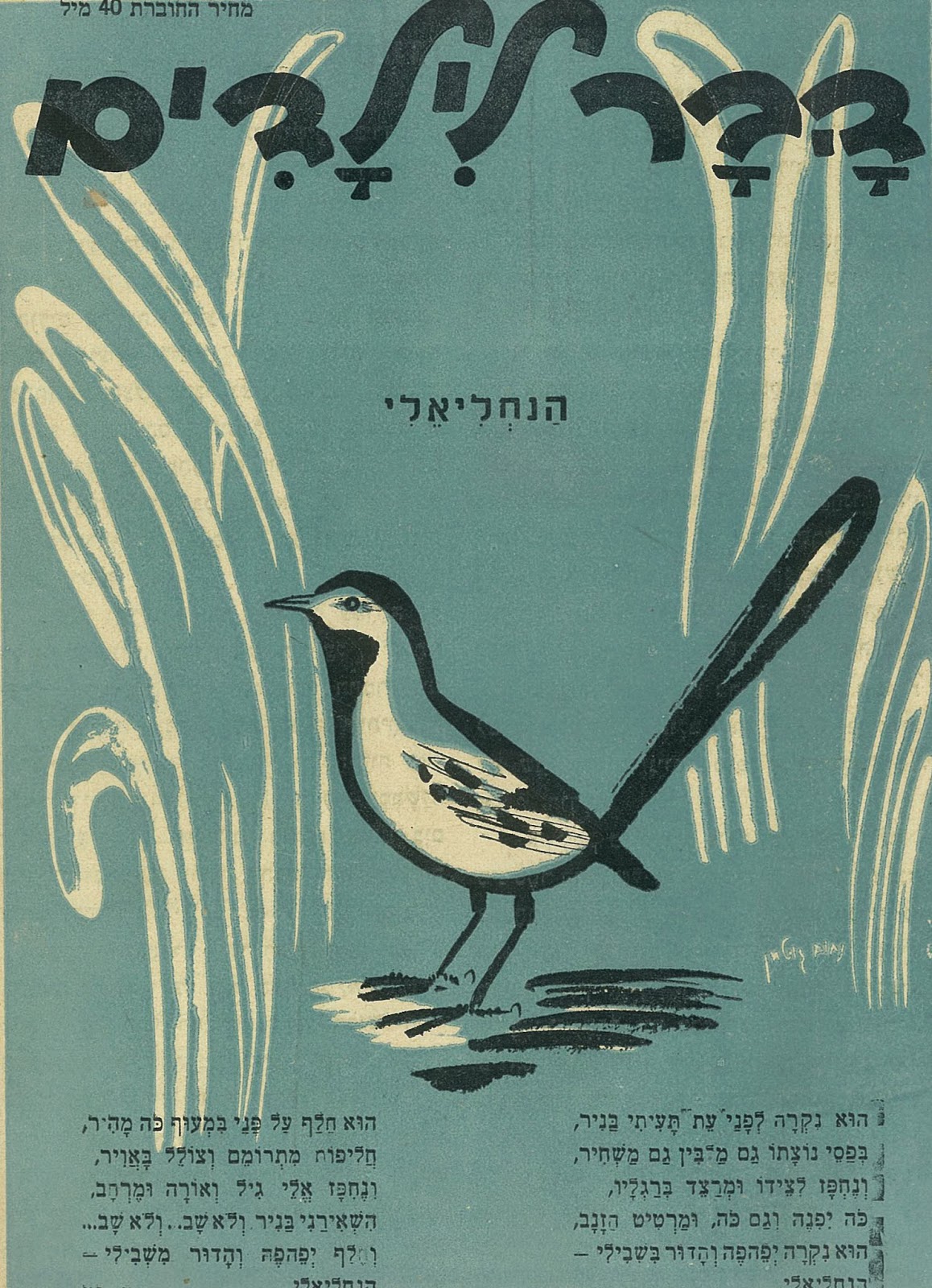