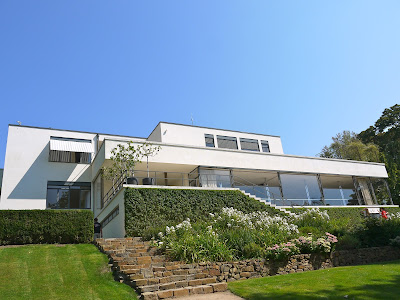 A few years ago I read The Glass Room, a novel by Simon Mawer which told the fictional story of a beautiful modernist house in the former Czechoslovakia, tracing the fortunes of the family that owned it. Thinly disguised, it was the story of Villa Tugendhat in Brno, a story that reflects the difficult history of the former Czechoslovakia from 1939 to 1989. Last week, in 35 degrees of baking heat, I stood outside the gate of Villa Tugendhat waiting to take part  in a guided tour. It was the culmination of a week spent in the Czech Republic and something I had anticipated for a long time. I was not disappointed.

Commissioned by Grete and Fritz Tugendhat, a Czech Jewish couple, the villa was built between 1928 and 1930 to the designs of Mies van der Rohe, one of the early leaders of the Bauhaus movement. Built over three levels, the street facing side of the villa appears to be single storey but this hides the steep land drop at the rear. The street level accommodates the entrance hall and sleeping quarters, including separate rooms for the owners, a room for the children to sleep in and space for the nanny.

With the exception of the wardrobes, most of the original fittings are missing from this level and reproductions have been sourced based on photographs from the 1930's. Van der Rohe designed some of the furniture for the villa including the tubular chair that he named after the city of Brno. He liked to name his chairs after cities and his Barcelona and Stuttgart chairs could also be found amongst the original furnishings. As part of the philosophy of mixing interior and exterior, there are outdoor spaces at this level. The terrace has a stunning view of the city  and a section of it was set aside for the Tugendhat children. In later years, Grete reminisced about them playing along the length of the terrace, including in the sandpit and driving from end to end in their toy cars.

Having viewed the upper level, the guide led us down a staircase and opened the door to the main living area. The impact of one's first site of the space is breathtaking. The first thing to strike me was the clear, bright light pouring in through the floor to ceiling windows that run the length of the room giving views of the entire city all the way to the Cathedral on the old centre. The windows play a key part in van der Rohe's philosophy of mixing interior and exterior. This is enhanced by the ability to lower the windows by the press of a button which the guide obligingly did, using technology from 70 years ago and which still works today. I wish I could say the same for some of the more recent buildings I am responsible for the care of! The impact of opening the windows is immediate as fresh air rushes in and the garden and living room merge into one. 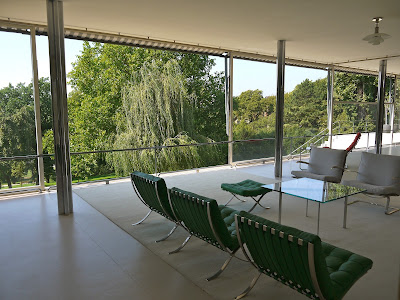 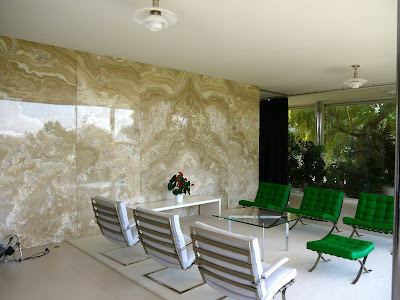 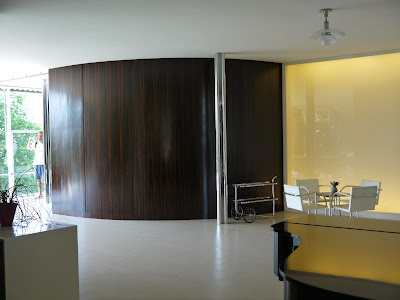 A large, single space, the living area is sub-divided by a macasser ebony curved structure that surrounds the dining area and of course, the legendary onyx wall on the other side of the room. In the day time the wall acts as a mirror to the outside world and the reflection on its surface of the trees and garden was very clear. As the guide explained, it is best seen in the evening as the sun sets and the wall and the space around it flood with different colours - greens, pinks and yellows in response to the changing external light. This amazing property of the onyx is described in Mawer's novel: In the glass room they mounted the onyx wall. The slabs had veins of amber and honey., like the contours of some distant, prehistoric landscape. They were polished to a mirror-like gloss, and once in place, the stone seemed to take hold of the light, blocking it, reflecting it, warming it with a soft, feminine hand and then, when the sun set over the Spilas fortress and shone straight in at the stone, glowing fiery red. "Who would have imagined," Hana said when she first saw the phenomenon, "that such passion could lie inside inert rock?"

The living area includes a library to hold Fritz's books and a small "secret room" just off it where he could sit quietly or as the guide suggested, perhaps where more controversial political texts could be kept given the nature of the times. I rather liked the idea of being able to sit and read or contemplate away from everyone else in a "secret" room. Another interesting feature of the living area is the dining table made of black polished pear wood. It comprises three layers which can be folded inwards or outwards to accommodate differing numbers of diners.

I have already referred to the use of technology in the villa with the window opening device, but this is just one of a number of interesting mechanical features that van der Rohe introduced. Villa Tugendhat has a complex air cooling, air conditioning and central heating system, implemented in 1930 and still functioning today. The plant for all of these ultra-modern features is accommodated in the basement which also forms part of the tour before it ends in the large garden that slopes away from the street and towards the city. Continuing the theme of the importance of light, even the staircase down to the garden adds to the overall design through the zigzag shadows on the steps. 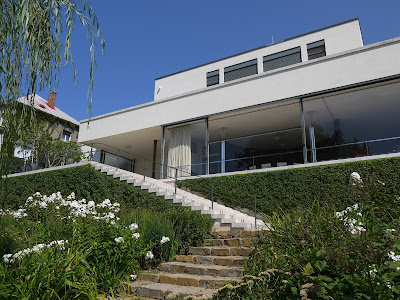 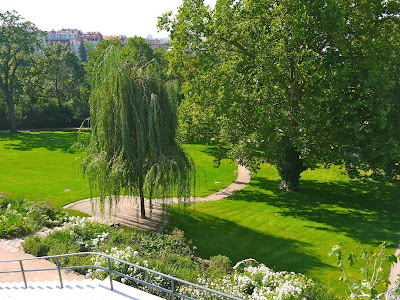 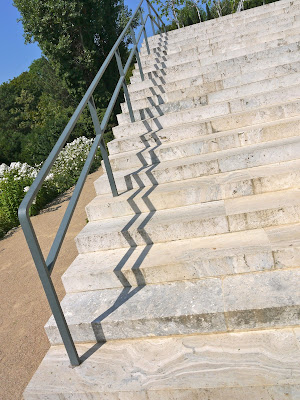 The house is interesting enough in itself, but it also has quite a story attached to it. The Tugendhats only lived here for eight years from 1930-1938. In 1938 Germany, with the acquiescence of Britain and France, seized the Sudeten area of western Czechoslovakia and began to threaten the rest of the country - finally invading in 1939 and beginning a long and vicious occupation. The Tugendhats were in the fortunate position of being able to leave the country and went initially to Switzerland before eventually moving to Caracas Venezuela in 1941.

It is interesting to note that Grete was the driving force behind the commissioning of the villa. She had visited a house in Paris that van der Rohe had designed and loved the interplay of interior and exterior as well as having been impressed by the Weissenhof development in Vienna. Returning to Brno at the end of the 1960's to give a lecture on her former home, Grete said "I truly longed for a modern spacious house with clear and simple shapes". She went on to tell the audience that her husband had felt the same and that he was "horrified by the idea of having rooms full of objects and cloths as he had known from childhood". Interestingly, Grete herself made the application for building permission and sole ownership of the house was in her name. She was not the only woman to have significant input to Villa Tugendhat as local architect Marketa Roderova-Mullerova worked with van der Rohe on the design of the garden. 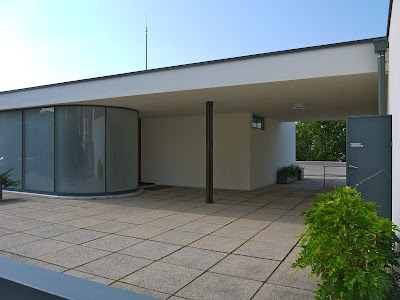 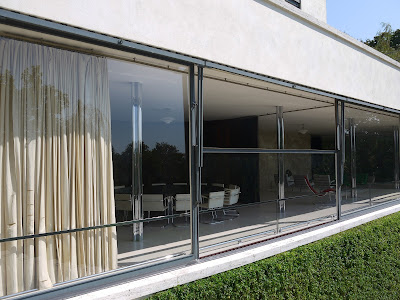 The villa was confiscated by the Germans in October 1939 and amongst other occupants, industrialist Water Messerschmidt established a flat and and office there from 1942 until an allied bombing mission blew out all of the windows and he left but not before having sealed up the onyx wall with bricks. By this time the macasser wall had also disappeared - although this was to resurface years later in a student building and has now been returned to its true home. The Russians arrived in April 1945 and Marshall Malinovsky's Red Army devastated the house, considering it a symbol of bourgeois privilege. Amongst other things they allowed their horses to walk freely on the linoleum floor. At least Messerschmidt's sealing of the onyx wall protected it from vandalism, no matter what his motive may have been.

From 1945-50, one Karla Hladek had a dancing school in the villa - making use of the wide open space of the living area for the dancers. The Czechoslovak government took over the building in 1950 and established a rehabilitation centre for children with spine defects whilst throughout the 1960's there were numerous public attempts to save and restore the building. This included interventions by Grete with input from Roderova-Mullerova in 1967 and for a moment it looked as if real progress could be made. However the Soviet invasion of 1968 changed the political situation radically. This together with the deaths of van der Rohe in 1969 and Grete in 1970 meant that things ground to a halt.

In 1989 things changed again in Czechoslovakia and real efforts began to undertake restoration. The building was handed to the management of the City Museum, declared a national cultural monument and in 2001 took its place on the UNESCO World Heritage List. But before this, in 1992 Villa Tugendhat had once again played a part in the history of its country as the venue for the signing of the agreement to divide the country into the separate Czech and Slovak republics.

Today, the villa is open to the public but its best to book ahead as numbers per tour are limited. There is  a small shop in the basement selling books, postcards and other items relating to the villa, to Brno's modernist buildings and to Mies van der Rohe. Surely, the highlight of my week in the Czech Republic, the Villa left me with mixed feelings - thrilled to have finally visited but sad at the thought that the Tugendhat's, Grete in particular, had only eight short years in the home they wanted and loved so much. 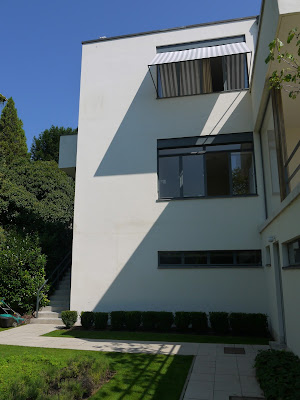 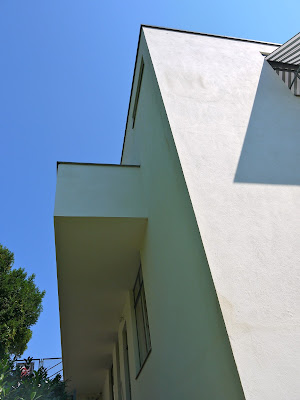 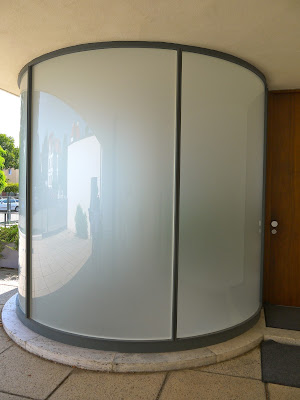 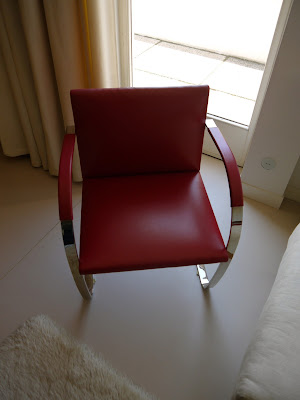