Regular readers will know that I have a strong connection with Tel Aviv. More than that, I love Tel Aviv. One of the main reasons for this love affair is the glorious collection of Bauhaus and Modernist architecture in the city. I am very loyal and will never transfer my affections, but over the last few days, a rival has caught my eye - Bucharest.

Bucharest does not have the number of Modernist buildings that Tel Aviv boasts. Nor has Bucharest been able to care for and preserve her architectural riches in the way Tel Aviv has. But there is something very special about Bucharest's modernist jewels, many of which are in poor condition, some of which have been lovingly cared for and all of which are interesting. Some of these treasures have severe problems. They are not strong enough to stand up to the major earthquake, which many people believe is not far away. Some are in such poor condition that they may collapse without the help of an earthquake whilst others have been vandalised by low quality renovations. The ownership of several remains in dispute after decades of misappropriations by one government or another and the efforts of original owners to reclaim them can take many years and be extremely complex.

Several of the most impressive of these buildings were designed by Dadaist and architect Marcel Janco. Janco was born into a middle class Jewish family in Bucharest in 1895 and through his long life (he died shortly before his 89th birthday in Ein Hod, Israel in 1984), he achieved much in the world of art. Between 1910 and 1914 he studied art under the careful eye of Iosif Iser and at just 17 he contributed drawings and layout for Simbolul, an avant-garde magazine published by two of his high school friends - Eugen Iovanaki and Sammy Rosenstock.  Rosenstock was to later change his name to Tristan Tzara and go on to be a major figure in the Dada movement, as was Janco whose family was originally called Goldstein. Several Jewish artists Romanised their names to assimilate into Romanian society or to evade discrimination.

Janco studied maths and chemistry in Zurich before switching to architecture with Karl Moser as one of his teachers. Together with Tzara and a number of other Romanians, he founded the Cabaret Voltaire in Zurich in 1916. In the same year he exhibited at the first Zurich Dada show with amongst others Giorgio de Chirico, Paul Klee and Tzara. He went on to spend time working in Paris before returning to Bucharest where in 1922 he became the artistic director and editor of Contimporanul - the most important and influential Romanian avant-garde publication of its time. Throughout the 1930's the situation for Jews deteriorated in Romania. In 1941 he emigrated to Eretz Israel with his wife and two daughters, but not before his brother in law had been tortured and killed by the Legionaries - the Romanian fascist organisation. He went on to achieve much as an artist in Israel, founded the artists village Ein Hod in 1953 and is the subject of the excellent Janco-Dada Museum in the same village.

But what of Bucharest? His remaining buildings are spread across the city. Once again, Valentin Mandache proved to be an excellent guide, leading us to each of Janco's remaining works, setting the historical and social context of the times in which they were built and answering our many questions. I will write about four of Janco's remaining Bucharest buildings, but there are several others to see.

Imobilul Frida Cohen (pictured below) is an apartment block built in 1935 and can be found at number 17 Str. Stelea Spatarul. The block has seven floors including the ground floor lobby and according to one of its residents, it was built to house the workers from the nearby synagogue. The same resident, a Mister Costin Dodu was  returning home with his morning shopping at the same time we were peeping through the locked gate at the entrance to the block. After speaking to him briefly, Valentin explained that Mr Dodu had invited us to look inside! I couldn't believe my good luck! 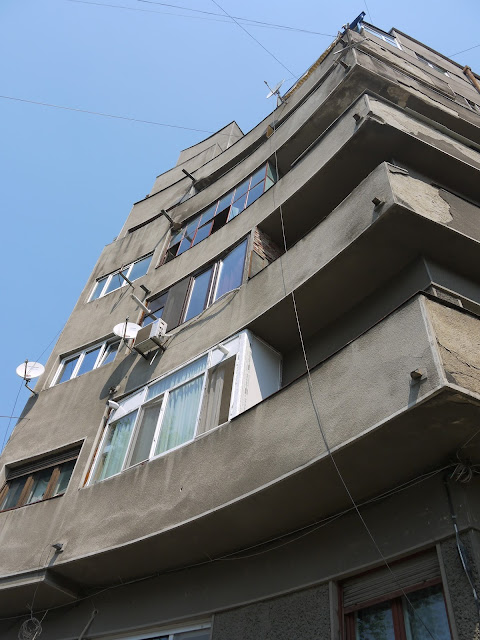 The striking concave facade had not prepared me for the drama of the lobby, with its tiled floors, and asymmetrical staircases on each side, one with a triangular stairwell, the other with a more squared design. The building still has its original 1935 lift which Mr Dodu and I took to the floor beneath his apartment. Unfortunately the light in the lift was not working, so it wasn't possible to see any of the fitments. His apartment had retained the original layout with two reception rooms, bedroom and kitchen. In addition to this, the function conscious Janco had designed a separate toilet and bathroom (very civilised) as well as two pantries to enable separate storage of meat and dairy foods in line with kosher requirements, supporting Mr Dodu's belief about the original residents. The flat contains a beautiful original interior glass panelled door with an art deco relief - completely gorgeous. For a short time we were back in 1930's Bucharest. Our host had assembled a collection of interesting objets d'art - he told us he likes antiques!

Mr Dodu's own story is just as interesting as his wonderful apartment. Born outside Bucharest, he first came to the city after the Second World War to attend university, but at age 20, both of his parents died and he returned home to look after his family responsibilities. There were still a large number of Jews living in his home town and one particular family decided to help him, inviting him to live in the Frida Cohen apartment on condition that he care for an elderly relative of theirs. He accepted and spent twenty years looking after the old gentleman. During this time he married and his wife also came to live in the apartment. When the old man died, his family asked Mr Dodu to stay in the apartment as thanks for his many years of service. He has since visited the former owner's family in Jerusalem and proudly displays souvenirs from the city on his wall. I am extremely grateful to him for sharing his story and allowing me into his home. A little earlier we had met a much younger resident of another Janco building - the apartment block - Imobilul Jacques Costin, at Str Paleologu number 5. Built in 1933, it features a beautiful sculpted relief to the right of the main door (pictured above). This was carved by Milita Petrascu, a friend of Janco's and for whom he later designed a villa. The relief features wool being woven by two women - one of the products that Romania's inter-war wealth was built on. Valentin managed to get us inside the block by talking to the young man (also returning with shopping!), explaining that he had guests from London who were interested in the building. Deeply suspicious and somewhat sceptical that the building was of any importance, he allowed us into the lobby and the stair well. In Romanian, he told us that he did not like living in Romania, saying he wished he had been born in another country, that it was impossible to make progress here and that he wanted to leave. When Valentin explained the historical importance of Janco, his response was that he was dead so how could he be interesting? Contrast his feelings with those of Mr Dodu who was very proud of his city and his home. (Pictured below - Milita Petrascu's house designed by Janco) The building is in need of restoration and would be at risk in the event of a future earthquake. It features  Janco's trademark ocean liner portholes on the main facade and on the sides of the building, an ornate front door and a beautiful narrow spiral staircase. We wandered into the basement which was in darkness but which once housed a concierge's quarters and it was still possible to see some of the original features on the interior doors. It has already suffered neglect as well as poor "modernisation" through the substituting of the original window frames with plastic replacements.Valentin explained that this is a common practice in Bucharest, that people generally lack knowledge of heritage issues and genuinely feel they are improving "old buildings".

The stunning Imobilul Bazaltin building, constructed in 1935 is located at Piata Charles de Gaulle number 2 (detail pictured below). This beautiful building must have been the showpiece of this part of the city back in the 1930's, but is now overshadowed by a variety of fairly nondescript modern steel and glass structures. The land adjacent to the Bazaltin is a large, abandoned building site, partially underwater. There are many such sites around the city, the result of the current financial crisis in Romania. Who knows when these sites will be either completed or cleared?

Janco's magnificent block originally housed a building society- not the financial type but one concerned with architecture. There were also a number of private apartments in the building which until recently housed an "exclusive" nightclub. It is currently empty and shows signs of fire damage on the ground floor. Like several other Janco buildings, the Imobilul Bazaltin features port holes and in this case interesting square windows, but for me it is the upper level of the building with the stepped roof of the main tower and the varied voluming that is the main attraction. It also features some beautiful curves which together with the tower bring to mind the much loved art deco/ modernist "ocean liner" look of some of Janco's finer buildings. 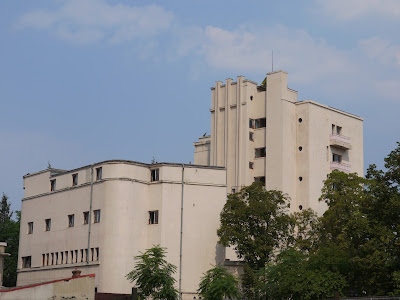 My favourite Janco building in Bucharest has to be Imobilul Solly Gold at Boulevard Hristo Botev Number 34 (pictured below). It is a three floor irregular pentagon structure, originally built as a luxury apartment block. Like the Jacques Costin building, it features a decorative panel by the main door as well as a panel giving the names of Janco as the designer and Maximilian Marcus as the builder. One side features some extremely interesting, triangular bay windows, with Janco again demonstrating experimentation and innovation with volume. Some of the original windows have been replaced with hideous plastic frames whilst at the rear of the building the whole shape of one of the windows has been changed according to the "taste" of a more recent owner. But despite this, the building is a jewel. Its corner location adds to its sense of importance. It is a little worn and in need of some care, but this building knows its a beauty. Imobilul Solly Gold was a real highlight of my time in Bucharest and I would have loved to see inside. If anyone has any pictures of the interior, I would be most interested to see them! 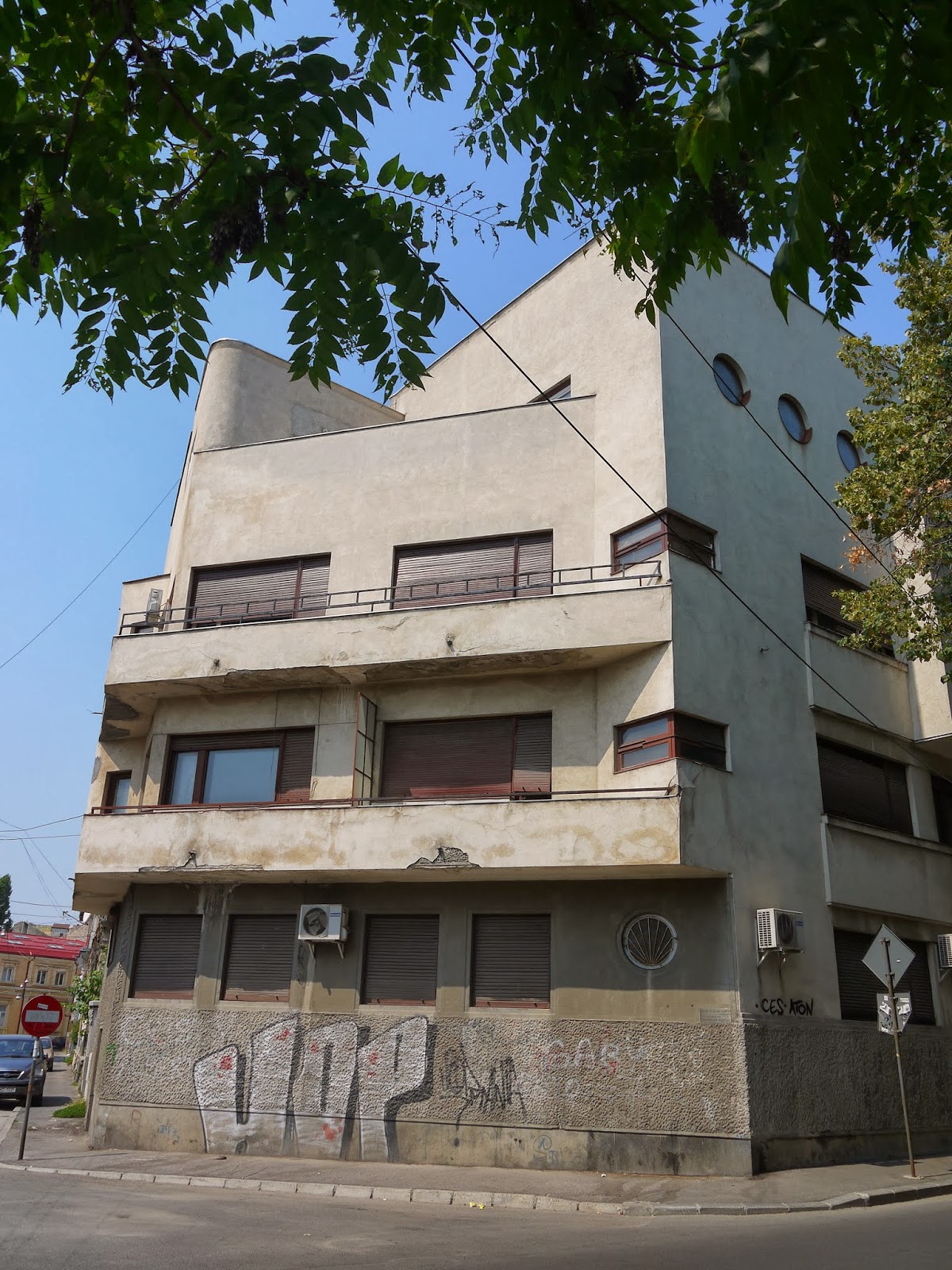 Janco was not the only modernist or art deco architect to grace Bucharest with beautiful buildings, but he was one of the more prolific, several have survived and we are able to identify them. The few I have highlighted here demonstrate the richness of the Bucharest of the 1930's and I know there are many more still to discover and enjoy. Yet another reason to return to the city.

You can see more pictures of Bucharest here.
Posted by Yekkes at 19:36