During the 1930's, Streatham in south London developed into one of the city's main entertainment areas with cinemas, theatres and dance halls opening and attracting a clientele from a wide area.  Although unlike Metroland on London's periphery, the tube never made it here, large numbers of mansion blocks were built, providing luxurious accommodation with all modern conveniences to attract the well-off. Many of these new homes were designed in the art deco and modernist styles and several of them survive today.

I lived and worked in and around this area for a number of years in the 1990's but only recently discovered just how rich it is in art deco and modernism. Like many other parts of London, Streatham suffered hard times from the 1970's onwards, losing its much loved department store, Pratts (a branch of John Lewis), several cinemas and theatres and many of its better quality shops. It acquired a bad reputation for street prostitution as well as being famous at the upper end of the same industry through the antics of Cynthia Payne, who amongst other things is said to have accepted luncheon vouchers as payment for the services of her employees. Streatham could also boast  many other famous residents including horror writer Dennis Wheatley, super model Naomi Campbell, actors Simon Callow, June Whitfield and Roger Moore and occultist Aleister Crowley. An eclectic list indeed.

Today things seem to be improving again. There are many new, good quality cafes and restaurants. There is an excellent live jazz venue, The Hideaway, which attracts top flight acts, and the area has managed to both keep its library and to acquire a new leisure centre complete with swimming pool and skating rink. And of course, there is the art deco...

Pullman Court is one of London's best examples of modernist architecture. Influenced by the Bauhaus movement, it was designed by Frederick Gibberd and completed in 1935. It is best admired from the opposite side of the High Road from where there is a clear view of the upper levels, the front blocks with their glazed towers and the iconic lettering carrying the building's name. Pullman Court is a series of units, all of which are painted a pristine white which together with the small balconies that many of the flats have, gives the place a very cosmopolitan feeling. It would not look out of place in the sunshine of Tel-Aviv or the winter sun of Scandinavia.

Many of the residential blocks built in Streatham during the 1930's boasted ultra modern living, none more so than Pullman Court. An advertisement in the January 1938 programme of the Streatham Hill Theatre extolls the benefits of life in Gibberd's modernist paradise " Uniformed porters, electric lifts, separate lifts for tradesmen...unusual social amenities are available comprising a Resident's Club with Billiards Room, Table Tennis and facilities for Dancing and Refreshments as well as a fine private swimming pool".  Note the separate entrance for tradesmen, something that was quite common during the 1930's, emphasising class differences and ensuring we all knew our place. Note also the gratuitous use of upper case in the advert. Flats were advertised at £80 per annum for 2 rooms or £110 per annum for 3-4 rooms, both options with kitchen, bathroom and furniture designed by the architect.  Expect to pay rather more than that now. In 2013, a two bedroom flat was offered for rental at £300 per week. Pullman Court is listed at Grade II star.

Corner Fielde stands on the junction of Streatham High Road and Wavertree Road.  This huge apartment block was designed by R. Toms and Partners and was completed in 1937. This Mayfair based architectural firm was prolific during the 1930's, designing several residential buildings both here and across London. The  Corner Fielde flats were spacious and included central heating, constant hot water, fridges and an electric lift. The building was advertised as "Mayfair in Streatham", a reference perhaps to the architects as well as emphasising quality and modernity and most of all, luxury. The exterior features a number of art deco elements. These include a decorative freeze between the third and fourth floors and use of the Broadway typeface to display the block's name over the doorways. There is also what may be an original deco light fitting, or at least in the style of to the right of the Wavertree Road entrance. The advertising for Corner Fielde claimed that the flats were "...unusually spacious, luxurious accommodation planned on sun trap lines..." This reference to sun trap lines is supported by the metal cased Crittal windows designed to make the flats as light as possible. 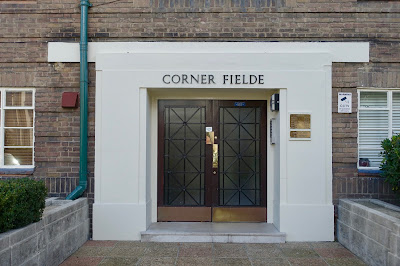 Streatleigh Court occupies an imposing position where the High Road meets Leigham Court Road. The rather plain facade on the High Road is relieved by some decorative brickwork beneath the bay windows but the main external features are the four balconies on the northern corner. Their shape and location at the narrow end of the building give them a nautical appearance in line with the art deco ocean liner motif. The name of the building is set out over the middle two balconies. An earlier structure of the same name stood on this site and was replaced in 1937 by the current Streatleigh Court, designed by Harrington's Architects. The ground floor is given over to commercial use and from 1938 until 1993 was home to the South Metropolitan Gas Company which later became British Gas.

Leigham Hall is another very large apartment block, completed circa 1936 and designed by our old friends R. Toms and Partners for the Bell Property Trust. Similar to Corner Fielde, the flats boasted constant hot water, tiled bathrooms and electric lifts whilst Leigham Hall residents also had the benefit of a private swimming pool. I particularly like the external doors with their stylish ironwork and wonderful leaping gazelles. The end corner of the block, where the High Road meets Leigham Avenue is also worth a look as it features decorative panels using deco motifs.

The High is a little further along the High Road from Leigham Court. It is the largest of Streatham's inter-war residential developments and comprises 174 flats across five large blocks that sit above commercial units,  as well as in a long continuous block at the rear.  Yet another R. Toms and Partners project commissioned by Bell Property, the High was completed in 1937. Residents here also had access to a private swimming pool and there are garages to the rear. Both facilities are still in use. As with Streatham's other large residential developments from this period, the exterior is restrained with some decorative details in the brickwork and on the bay windows to relieve the simplicity. However, the external doorways are magnificent. The glazing has decorative metalwork whilst the external lobby floor has the building's name in black tiles on a white tiled background. The name is in turn reflected by the metalwork at the bottom of the doors. Fabulous.

Montague Burton of Burton's gentlemen's outfitters opened a store at 103-105 Streatham High Road in 1932. Architect Harry Wilson designed many of Burton's stores including this one which has a spectacular art deco facade above ground floor level. Burton's is long gone and the ground floor is now a pub with a "modernised" and incongruous facade, but the upper levels retain their original features with a series of stylised elephant heads and trunks as well as a series of zigzag decorative details. There are also two commemorative stones, dated 1932 noting the opening of the shop by Stanley Howard Burton and Barbara Jessie Burton.

Montague Burton was born Meshe Osinsky in 1885 in Kaunas, now part of Lithuania, coming to Britain in 1900, fleeing pogroms in the then Russian Empire. He developed a taste for art deco architecture which became the Burton's house style. His interest was clearly serious as he acquired Harry Wilson's architecture practice in the early 1930's and must be one of a very few retailers to have had his own architectural department.

Still with the rag trade, Streatham had several drapers in the 1930's. These included Sharman's at numbers 180-182 on the High Road, now occupied by W.H. Smith. The facade dates from 1929 and has simple Art Deco motifs surrounding the two large windows and a stepped pediment where it is still just about possible to make out the original store name. One former customer reminisces about seeing "piles of salmon pink corsets and nylons at 2/ 11d three farthings". A bit before even my time but fascinating none the less.

As mentioned earlier, this was a major entertainment destination during the 1930's and the former Regal Cinema at 5 Streatham High Road would have been one of the main attractions. Built in 1938 it was designed by William Riddell Glen who designed several cinemas around the country including the still functioning Genesis in east London. The single screen auditorium could seat 1232 in the stalls with a further 730 in the circle. Deco elements of the interior design included a double staircase leading to the circle foyer and backlit niches containing stylised figurines in the auditorium. The first screenings took place on November 14th 1938 when Vivacious Lady starring Ginger Rogers and Prison Farm with Shirley Ross were shown.

Over the years, ownership of the cinema passed to the ABC group, then to Cannon and back to ABC, before closure in 2000. The cinema then stood empty for some time and suffered damage from squatters and a series of fires. Despite the facade being listed at Grade II status in 1998, the auditorium and stage were demolished in 2007 and flats built in their place. The remaining ground floor area now contains a carpet shop and a gym. The large faience tiles and black decorative pillars on the facade have been retained as has a side tower, hinting at the Regal's original splendour.

The South London Press newspaper had its headquarters in Streatham until 2013 when it moved to Beckenham. The newspaper operated from a purpose built structure in Leigham Court Road, built  between 1935 and 1939. The restrained art deco style includes a central crowned tower with a glazed stairwell whilst the horizontal and vertical lines are emphasised with cornices. The windows are a key feature, designed to maximise natural light in line with 1930's ideas about improving the working environment. The upper levels are now converted to residential use and an additional storey has been added, spoiling the original lines and prominence of the tower. The ground floor remains in commercial use. There is a small cafe opposite - Cafe Mes Amis which serves good coffee and sometimes has Nata - those delicious Portuguese custard tarts as well as more substantial offerings.

The majority of the buildings featured in this post can be found along Streatham High Road, sometimes claimed as the longest high road in Europe (although it isn't). There are several more art deco buildings here both on the High Road and in the streets that run off it. Architecture enthusiasts are encouraged to visit and see for themselves as well as to sample one, or more, of the excellent new cafes.