I am just back from my first ever visit to Mexico which was also my first visit to Latin America. I am completely smitten and Mexico City in particular is right up there with my favourite cities of Tel Aviv, Moscow and Budapest. There are many reasons for this - the stunning collection of architecture, the overwhelming art collections including some of the world's best public art, the great metro system, a certain chocolate and churros outlet and most of all the warm and friendly people. More of all of this in other posts, but first architecture!

One of the many reasons I wanted to visit Mexico City was to see it's wonderful collection of art deco buildings. Although less well known than Miami, Brussels or Paris, Mexico City has some of the world's most striking examples of the style. I must also add that the pictures and information posted on Art Deco Mx also inspired my visit and I recommend at look at this site.

The city saw a major expansion in the 1920's and 1930's with new suburbs being built to provide homes for the rising middle classes who had grown wealthy enough to move out of the old centre and who wanted something modern and different. Many of the earlier art deco houses are in the Condesa area where the Colonia Condesa Racecourse began selling lots in 1927 and architects such as Juan Segura and Francisco J. Serrano were engaged to design new homes and business premises. Like everywhere else, some of this built heritage has fallen victim to developers and demolition, but much remains - too much to see in just one visit! Unfortunately, it is not possible to gain access to the interior of most of the buildings as they are residential, but occasional glimpses can be caught when residents enter or leave, revealing beautiful mosaic floors, ceilings and staircases.

Not surprisingly, my first stop in Mexico was Condesa, an affluent area of restaurants, cafes and very expensive housing in the south-west of the city where many of the most interesting deco buildings are located, especially on and around Avenida Amsterdam and the adjacent Avenida Mexico.

Avenida Amsterdam is home to my favourite building in Condesa. Built in 1938, it stands out from its neighbours by virtue of its beautiful green facade and recessed entrance with geometric metal details on the glazing. Whilst I was admiring the exterior of this most attractive of buildings, one of the residents drew up in his car and asked me if I would like to see the lobby and the staircase as they were also interesting. Unable to believe my good luck I was privileged to see the spiral staircase with its black and white ceramic patterned wall tiles and an interesting ellipse effect looking up to the skylight. I am extremely grateful to this gentleman whose kindness enriched my visit. I understand that the architect's identity is unknown, so as ever, anyone with any details is strongly encouraged to let me have them!

Still in Condesa, Edificio Casas Jardines stands on the corner of Calle Sonora and Avenida Amsterdam.  Built between 1928 and 1930 and designed by Francisco Serrano it is an imposing presence with two floors of residential property above the ground floor retail spaces. It has many interesting features including a flared entrance marquee, cantilevered bay windows and external friezes with a range of motifs, both geometric and representing vegetation. Many of the residents have placed window boxes and plants on the exterior of the building, reflecting its name as a place of homes and gardens. Serrano was responsible for several buildings in this area including Edificio Mexico. Born in Mexico City in 1900, he studied civil engineering and architecture at the Universidad Nacional Autonoma de Mexico (UNAM). He later taught there as a professor of civil engineering and architecture. The Serrano family has made further contributions to the built environment through his son, Francisco Serrano Cacho whose work includes the second terminal at the city's Benito Juarez airport.

Still in Condesa, I spotted a few more favourites. Edificio Rosa on Avenida Mexico dates from 1935 and is just what it says it is -  a pink house, or to be more exact, a pink painted art deco apartment block. With lovely Bauhaus curves, including a curved glazed corner, it was always going to appeal to me. It also has lovely stylised lettering over the glazed door which has metal detailing and pink marble effect handles!

There are also a number of striking art deco structures in the centre of the city. The Loteria Nacional is one of the tallest buildings in the capital at 85 metres and with 20 floors and for many years was the tallest building in Latin America. Located in the Moro building on Paseo de la Reforma, it was engineered by Jose Antonio Cuevas, the foundations were laid in 1934 and work was completed in 1946. Early excavations of the site found significant amounts of water in the subsoil leading Cuevas to pioneer the elastic floating system of foundation. His ideas were met with scepticism to the extent that he was referred to as "El loco", but the building stands and has survived five earthquakes including  major events in 1957 and 1985. I particularly like the deco details above the main entrance with its metal globe and more of that stylised lettering.


Avenida 16 Settembre is in the very heart of the city. Currently being pedestrianised, it leads directly into the Zocalo, the main square of the capital and the heart of the country. The Zocalo, is home to the Catedral Metropolitana and a number of important buildings and was declared a World Heritage Site by UNESCO in 1987 as part of a wider listing for the historic centre. But back to Avenida 16 Settembre which in the space of a few hundred metres is home to several deco, nouveau and other interesting buildings. These include number 39 whose seven storeys include glass bricks and black tiles above the retail premises on the ground floor, recessed upper floors and a very narrow corridor access in the centre of the building that is echoed with a central recess for the full height of the building.  The narrow corridor hides the building's greatest external treasure - a beautiful stained glass window above a relief carving of a dog. Again, details of the date and provenance of this building seem have been very hard to find, but Eduardo at the previously mentioned Art Deco Mx is on the case, so I hope to be able to update this soon!


The centre of the city runs on a grid system and a number of side roads cross Avenida 16 Settembre. There are more finds in these side streets including book shops, cafes and more art deco. One of the most interesting examples is Edificio Motolina at number 37 with its chunky appearance and flattened curved pillars on the facade. This apartment building shows signs of fairly recent restoration and appears to be home to a number of businesses according to the signs in the lobby where there are also some interesting details but this was one of the few places where I was unable to take pictures - due to the strict instructions of a very suspicious concierge. You can't win them all!

I must also mention a building that has been lost. The Hotel del Prado which once stood on Avenue Juarez was once the focus of Mexico City's nightlife and one of it's fanciest hotels. Designed by architect Carlos Obregon Santacilia in collaboration with Mario Pani Darqui, it was completed in 1933 but was severely damaged by an earthquake in 1985 and subsequently demolished. The hotel was the original home of Diego Rivera's mural Dream of a Sunday afternoon in Alameda Park which he painted in 1947. The mural was saved following the earthquake and rehoused in a purpose built pavilion in Alameda Park itself. It is free to enter on Sundays, and the mural is a must see for anyone interested in Mexican art or history. It originally showed one of the characters holding a sign saying god does not exist. Under protest, Rivera eventually removed the text and it is ironic that on my visit, a Christmas carol concert was being held there with the choir standing in front of the mural. I suspect Rivera would not have approved. The image below is reproduced from a vintage postcard I managed to find on ebay. In case anyone is worried by the lack of cakes and coffee at this point, fear not. I had a much earned pit stop at Matisse a cafe, restaurant and bakery in Avenida Amsterdam where I have to confess for the first time ever I was defeated by the size of the cream sponge wrapped in marzipan. This despite most valiant efforts.

I will end with a few more images of the deco buildings in the Condesa area (and one of the Matisse Restaurant). 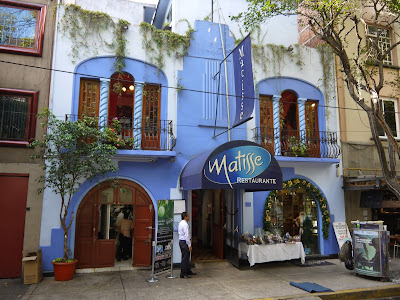 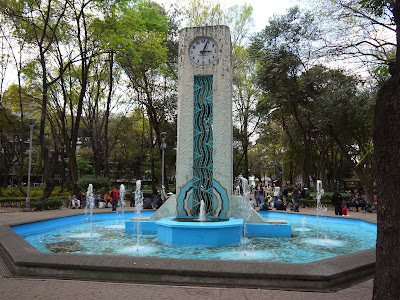 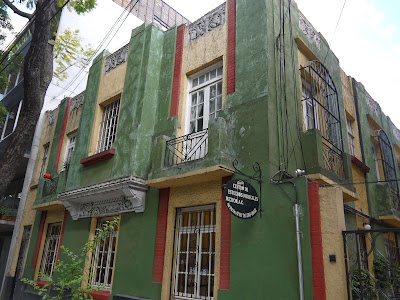 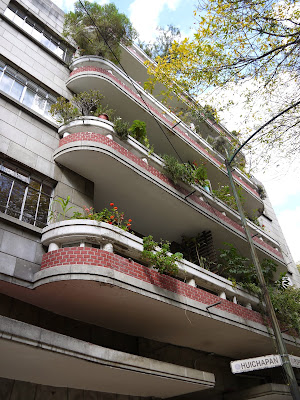 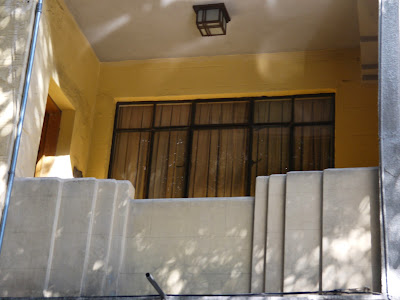 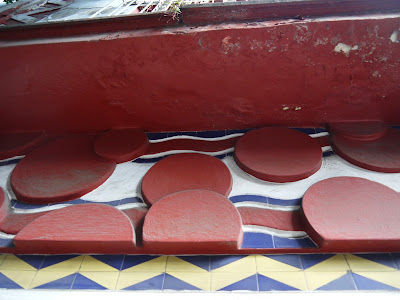 See more pictures from Mexico City.
Posted by Yekkes at 09:28