The synagogue in Piazzetta Primo Levi is one of Turin's most striking buildings. With clear Moorish influences and four onion domes it is clear evidence of a once prosperous and significant community. Today's community numbers less than 1000. In 1931 there were a little more than 4,000 Jews in the city - not a large community and one that has been reduced over time by emigration, a declining birth rate and of course the impact of the Holocaust. Down to just over 1,400 people in 1938,  246 Turinese Jews were deported from Turin to Auschwitz in the winter of 1943. Just 21 returned, one of whom was Primo Levi, surely Italy's most gifted writer and perhaps the chronicler of the Holocaust and its immediate aftermath through his books If This is a Man, If Not Now, When? The Drowned and the Saved and The Truce.

Having survived Auschwitz and the long and difficult journey back to Italy, Levi reestablished himself, writing several books and working in the paint business. His death is shrouded in mystery. He died in April 1987, falling from the interior landing of his third storey apartment. The coroner declared his death to be suicide but some family members disagreed.

The synagogue sustained damage during the war but was restored in 1949 and is today in excellent condition. Like many larger synagogues in Europe it's community uses only part of the building for regular services due to its small size with the main prayer hall being used only for special occasions.


Grand as the synagogue is, it might have been even grander if the building originally planned as the Jewish house of worship for the city had been used for that purpose. In 1863, the city's Jews commissioned architect Alessandro Antonelli to build a synagogue but as time went on, the scheme expanded and costs soared to the extent that the project was no longer affordable to the community and the city government too it over. It took until 1889 to complete, the architect failing to see his work finished, having died the year before. The building which became known as the Mole Antonella has a  thin spire which sits on top of a small columned temple which in turn sits on a large (very large) dome. In a further round of controversy, it lost 47 metres of the spire in high winds in 1953. It was rebuilt with a metal frame covered in stone.

Initially used as a museum of the Risorgimento (the re-unification of Italy), it is now home to the Museo Nazionale del Cinema. I visited the museum whilst in Turin and enjoyed the galleries arranged around the exterior of the building and containing an excellent poster collection, memorabilia from Italian and Hollywood films, contraptions and screenings from the early days of cinema. A visit also gives the chance to see numerous classic films running throughout the museum as you explore its collections. It is also possible to take an elevator ride to the top of the building and view the city. As waiting time to get into the elevator was two hours, I passed on this occasion, but my friends stuck it out and went to the top for some magnificent views. The elevator journey includes a ride through the huge open dome overlooking the lower museum galleries. I think that might have been a bit much for me - the walk around the upper floors of the museum having left me a tad vertiginous! The museum has a good shop with lots of postcards, posters, books and cinema "stuff". I chose some postcard reproductions of film posters from 1918 and 1920, reproduced below.


The city has a long history of and love affair with film. It was here that film chromatography was first established, whilst the proximity to France meant that local filmmakers were influenced by the Lumiere brothers. Italy's first cinema screening took place here in 1896 whilst in 1914, Giovanni Pastrone's Cabiria, one of the world's first blockbusters premiered here. In later years, Rome assumed leadership of the Italian film industry but Turin is still important and since 1982 has hosted a prestigious international film festival. Still on film, whilst wandering the streets behind Via Roma, I came across the wonderful art deco facade of Cinema Lux. This cinema which opened in 1934 was originally called Cinema Rex, then the Dux and finally acquiring the name Lux after the Second World War. Located in the very elegant Galleria San Frederico adjacent to Piazza San Carlo it was once Turin's most luxurious cinema with over 1,500 seats and was the work of architects Giovanni Canova and Eugene Corte. Corte, born in Geneva had studied under Jean Luis Pascal whose main claim to fame was in assisting Charles Garnier with the design of the Paris Opera.

No trip is complete for me without seeing at least a few modernist buildings from that most creative of decades - the 1930's. In Turin, I knew that the Liberty Style art nouveau architecture was going to be the star of my show and indeed it was, but I was thrilled to happen upon a couple of cracking modernist buildings too. Close to the Lux cinema I came upon the Torre Littoria in Via Giovanni Battista Viotti. tilt in 1933 and designed by architect Armando de Villa Mellis. It made significant use of innovative materials for the time including glass bricks, split tiles and linoleum. It was also the first building to be constructed with a welded steel support structure. Totalling 19 floors, the summit is 109 metres above ground and the tower remains one of the city's tallest buildings. It is adjoined by a cool, modernist 9 storey lower body with beautiful curves, lines and clean crisp colours. I love it! I have included pictures of two more modernist buildings in Turin, one adjacent to the Torre Littoria and another in the Liberty Style district just outside the centre of the city. I have been unable to find details for these buildings…if anyone knows about them please contact me on the blog. 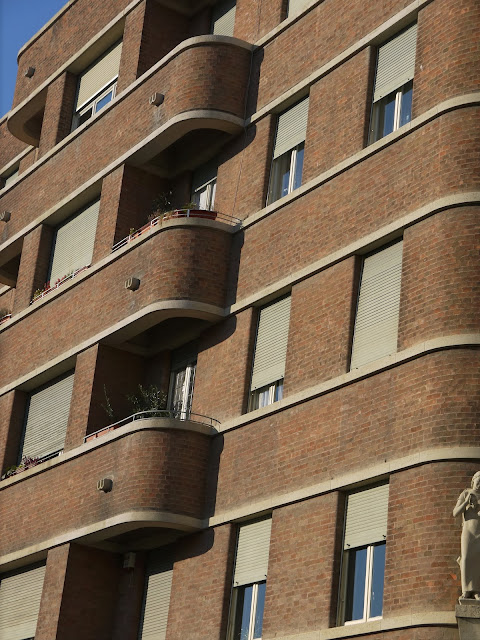 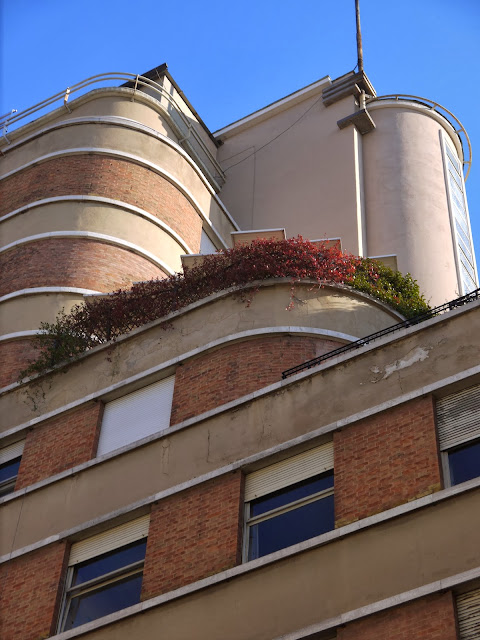 You might also like Turin part one - Elegant art nouveau and some anther good cafes
Posted by Yekkes at 23:12