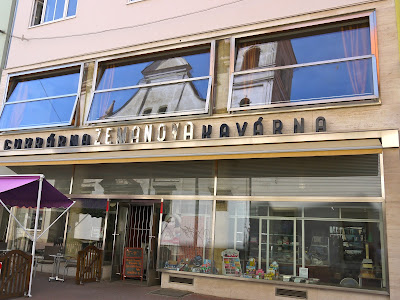 One of the best things about travel is the delight of happening on the unexpected. Just a couple of weeks ago, whilst strolling through Brno's old centre, my attention was taken by a cafe with a functionalist facade. The sign above the entrance identified it as Cafe Zemanova, which was a little confusing. Confusing because there is a famous Cafe Zemanova in Brno, but not on Josefska, the street that I was on. The "other" Cafe Zeman is in Koliste and is a reconstruction of a building designed by Bohuslav Fuchs, completed in 1925 and astonishingly demolished in 1964 before being reconstructed  in 1995. So there are two Cafe Zemans/ Zemanovas in Brno.

The one I discovered by chance was designed by architect Vitezslav Korn and completed in 1936 on the request of builders Josef and Wilhelm Sedlacek. Originally named for the builders as Cafe Sedlacek, both interior and exterior display elements of functionalism - a form of modernism extremely popular in the Czechoslovakia of the 1930's. Tempted inside to escape the 35 degrees of heat and dazzling sunshine of the day, I was thrilled to discover that many of the original fixtures and fittings designed by Karel Ruzicka had been retained. The wood panelling and cushioned benches are still stylish and modern but pride of place goes to the marble staircase with it pillars and curved edge at the foot of the stairs as well as that lovely chrome bannister. There is a second larger room on the upper floor but this was closed when I visited so all of the photographs are of the ground floor only. 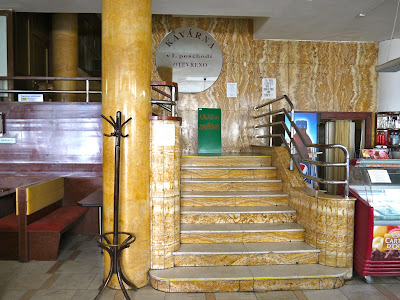 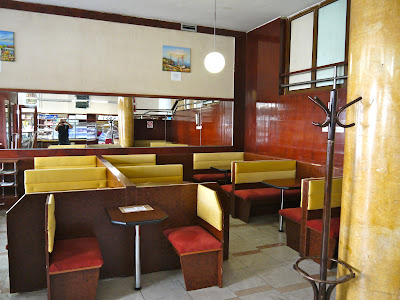 After the Second World War and the occupation of Czechoslovakia, the Sedlaceks were identified as collaborators, the cafe was confiscated and eventually nationalised in 1948, its name being changed to the Patisserie on Josefksa. In 1990, things changed again and Adolf Zeman who began working in the cafe as a 14 year old pastry chef in 1948 became the owner and gave the cafe its current name. He remains the owner until today and has worked there for 68 years.

I have been unable to find mention of the cafe in any of the travel guides and only fleeting references online but this place is a little gem and a step back into the very stylish mid 1930's in what was one of Europe's most modern countries. Cafes have always been an important part of Central European cultural and social life and I imagine the former Cafe Sedlacek, now Zemanova to be no exception. The photograph of the exterior shows the church directly opposite reflected in the cafe's windows. I suspect after having paid a visit to the church for religious purposes, some of the congregation would have crossed the street for a different kind of religious experience - Sunday afternoon coffee and cakes.  Cafe Zemanova - the find of my stay in Brno. 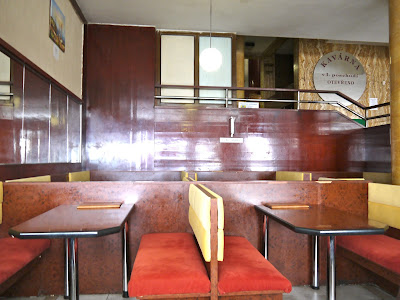 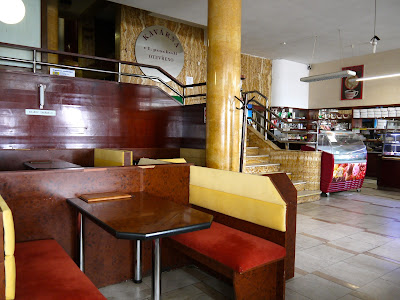 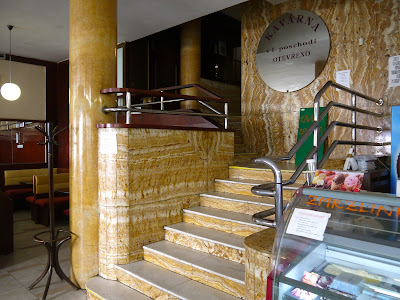 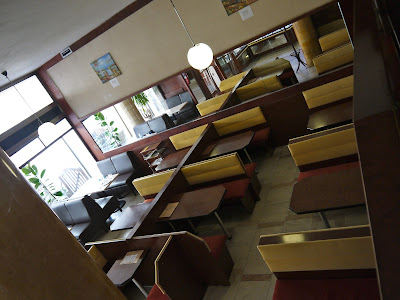 You can see more photos from the Czech Republic including more modernist architecture here.