A few hours in Macau

I recently visited Australia and had a brief stopover in Hong Kong on the way back. Whilst there I was able to spend a few hours in Macau, visiting the old, historical part of the city, exploring a place that I have long been fascinated with.

I reached Macau by taking the ferry from the City Harbour terminal on Kowloon's Canton Road. The ticket office is huge, noisy (very noisy) and full of hundreds of people wanting to travel to Macau and to other destinations from a bewildering range of ferry companies. I decided to buy a ticket from the company whose ferry would be next to leave and boarded with several hundred other people for the one hour crossing. The experience was similar to boarding an aeroplane with passport checks, a departure lounge and numbered seats allocated to passengers. The crossing was comfortable and involved passing many small islands in the bay that give an idea of just how peaceful this place must have been before a century or more of development changed it forever.

Sixty minutes later, I disembarked, went through a passport check with Macau immigration and emerged into a busy city to wait for the number three bus to take me to Avenida de Almeida Ribeiro, which runs through the heart of the old city. This former Portuguese enclave was handed back to China in 1999 after more than 400 years of Portuguese control, having been leased from the Ming court in 1557 and the Portuguese influence can be seen everywhere in the old city, but more of that later.

The short bus ride from the ferry terminal to the centre took me past some amazing sites - and to be honest some amazingly ugly sites. Macau is known as a place to gamble, rivalling Las Vegas and since changes in legislation in 2001 opened up casino licensing, many new hotels and casinos have sprung up, vying with each other to be bigger, bolder and brasher in an attempt to win over gamblers. I just hope they don't get to encroach further on the old city and ruin this unique place.

Normally I plan a route for my exploration but on the day I visited Macau I felt like wandering and seeing what I could find. The old centre was extremely hot - so hot that I could feel the skin on my arms burning and more worryingly, my hairless head. Not wanting to arrive back in Hong Kong looking like a tomato, I scouted around for a cap, finally asking in a t-shirt shop if they sold caps. The assistant smiled very nicely and said "no sorry" before I turned around to see a wall display of maybe 50 caps. Mmm. OK, my Cantonese, Mandarin, Portuguese, Patau are doubtless worse than her English. I got my cap and proceeded.

My first stop was at the Taoist Sam Kai Vui Kun temple in Rua Sui do Mercado de Sao Domingos. At the moment there is a building site next door, but stepping through the door of the temple made negotiating the mess around the entrance worthwhile. The name means "a community hall for three streets" and once acted as a meeting place for merchants and then an adjudication court until 1912. Dedicated to Kwan Yu, the god of war and justice, the temple is filled with smoke coming from the joss sticks being burned to honour him and to offer prayers for a range of favours. Guests are welcome and I was able to wander freely, but respectfully, with my camera. The interior of the temple is alive with colours - reds, golds and greens with discs and spirals suspended from the ceiling and spectacularly colourful scenes painted on the interior of the main doors. The temple is a great place to spend a little quiet time in this crowded, busy city.

Just a short step from the Sam Kai Vui Kun temple and I was in the Lago do Senado standing in front of the yellow facade of the Church of Saint Dominic. Built in the 17th century, this baroque church is light and cool and has a beautiful altar and a timber roof. The green shutters on the facade add additional character to this landmark building. The church is surrounded by colourful buildings showing both Portuguese and Chinese influences whilst the Lago is covered in cream and black tiles…and hundreds of shoppers and sight seers. There is a museum within the building - the Treasury of Sacred Art containing religious themed paintings and objects.

The peaceful atmosphere inside the church belies its sometimes tempestuous history. In 1644 it was the scene of the murder of a Spanish officer opposed to the colony's relationship with Portugal. Having entered the church to seek refuge from an angry mob he was killed at the foot of the altar whilst mass was being said. In 1707 soldiers were sent to the church to uphold a papal liturgical ruling to find that not only had the Dominican friars had closed the church, they also threw rocks at them!

The Lou Kau Mansion in Travesa de Se was built in 1889, commissioned by local merchant Lou Wa Sio, also known as Lou Kau. Lou was born in Guangdong and arrived in Macau in 1857. He originally worked in banking but introduced the Chinese lottery to Macau and became known as the city's first king of gambling. The Mansion was one of the highlights of my very short time in Macau. Built in Cantonese style but with clear Mediterranean elements, the simple grey facade conceals  a number of open and semi-enclosed rooms and courtyards, integrating inside and outside areas. The decorative motifs in the building show both Chinese and European influences and I particularly liked the wooden and stained glass screen dividing the reception area from the first courtyard. Free guided tours are available at weekends from the very friendly and welcoming staff.

Regular readers will be very familiar with my love of art deco architecture. I did not expect to see very much of this style during my few hours in Macau. I was then, very surprised that the first building I saw when getting off the bus on Avenida de Almeida Ribeiro was the former Apollo Theatre built in 1935. It occupies a prominent spot opposite the Lado do Senado and has a green and white painted exterior, a glazed facade including curved glass and vertical lettering on the corner. A lovely example of style moderne it no longer operates as a theatre and the ground floor has been given over to retail. Its a bit of a showstopper - what a shame that part of the facade is covered with an enormous advert for Esprit. I understand that there are more modernist and art deco buildings elsewhere on Macau  and hope to track them down should I return. However, I did see the Macau Methodist Church which has some deco features on its exterior with its glazed stairwell, curved canopy over the entrance and decorative internal doors.

The Leal Senado building back on Avenida de Almeida Ribeiro was built in 1784 in a style that had been popular in Portugal during the 14th and 15th centuries. Built as Macau's first municipal chamber, it retains that function today but is open to visitors who are able to walk through the inner courtyard and rest in the garden at the rear of the building. The stunning blue and white azulejos are complemented by the yellow flowers, emphasising the Mediterranean feel of some parts of Macau. The name of the building comes from a title bestowed on Macau by Portugal's King Joao lV, exiled to Brazil during the 1580-1640 Spanish domination of Portugal. Macau remained loyal to Joao, who in return gave the city the title "City of our name of God Macau, there is none more loyal" - leal being the Portuguese for loyal.

Carrying on the Portuguese theme, one of my favourite buildings is the Livraria Portuguesa (Portuguese book shop on Rua do Sao Domingos. The shop occupies the ground floor of a corner high rise building  which stands out due to its beautiful balconies decorated with blue and yellow ceramics. The Livraria is well worth a visit too. It stocks books in Portuguese and English, including fiction, travel and photographic books, many of them about Macau, as well as postcards and small souvenirs.

I had just three hours in Macau from getting off the ferry to getting back on the bus to the return terminal. The old centre is very compact and it was easy to see a lot in this short time and even to have a short coffee and ice cream break too! However there is a lot more to see and visit here - much of it listed in the UNESCO World Heritage listing.

A few more pictures from Macau... 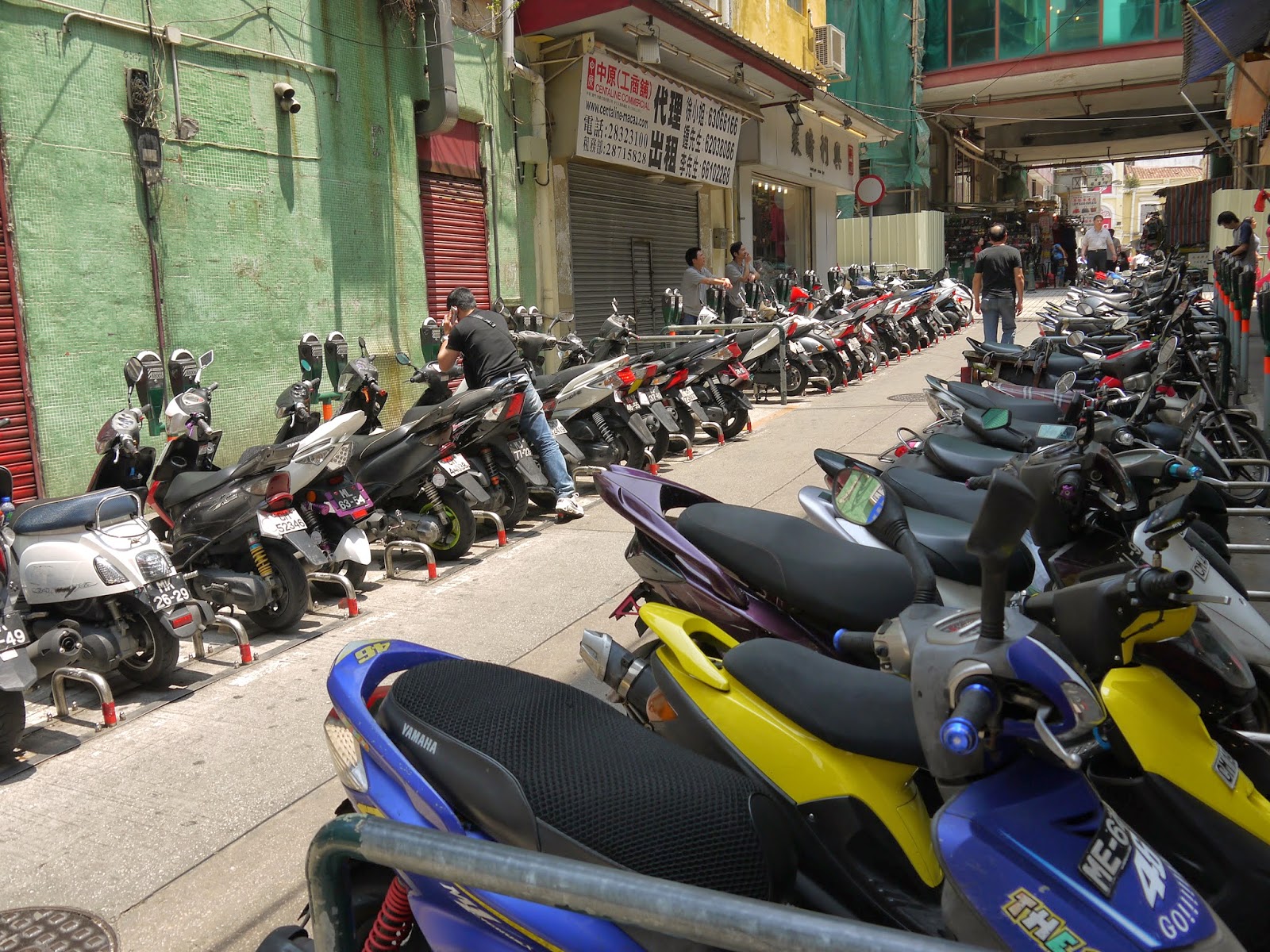 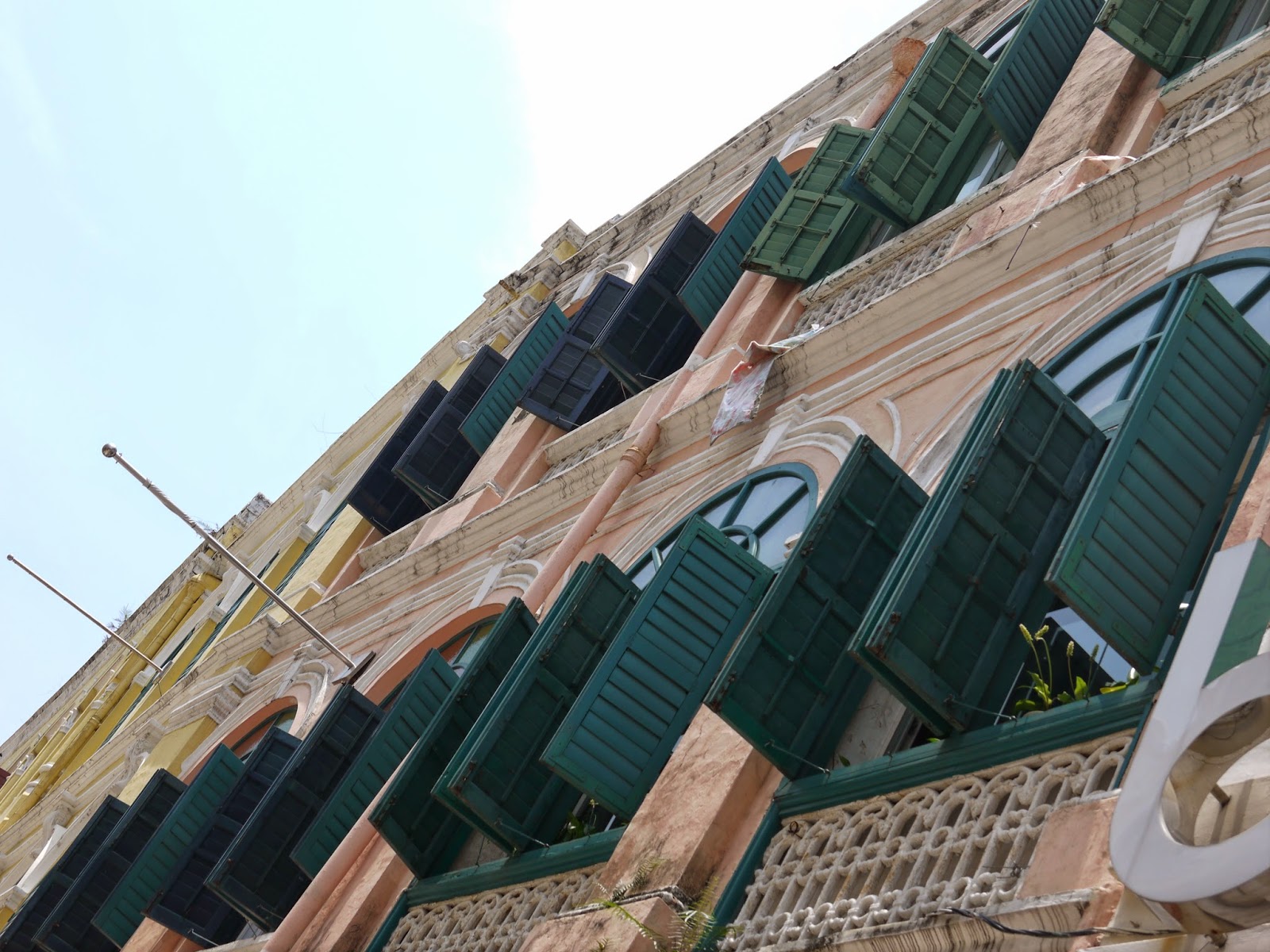 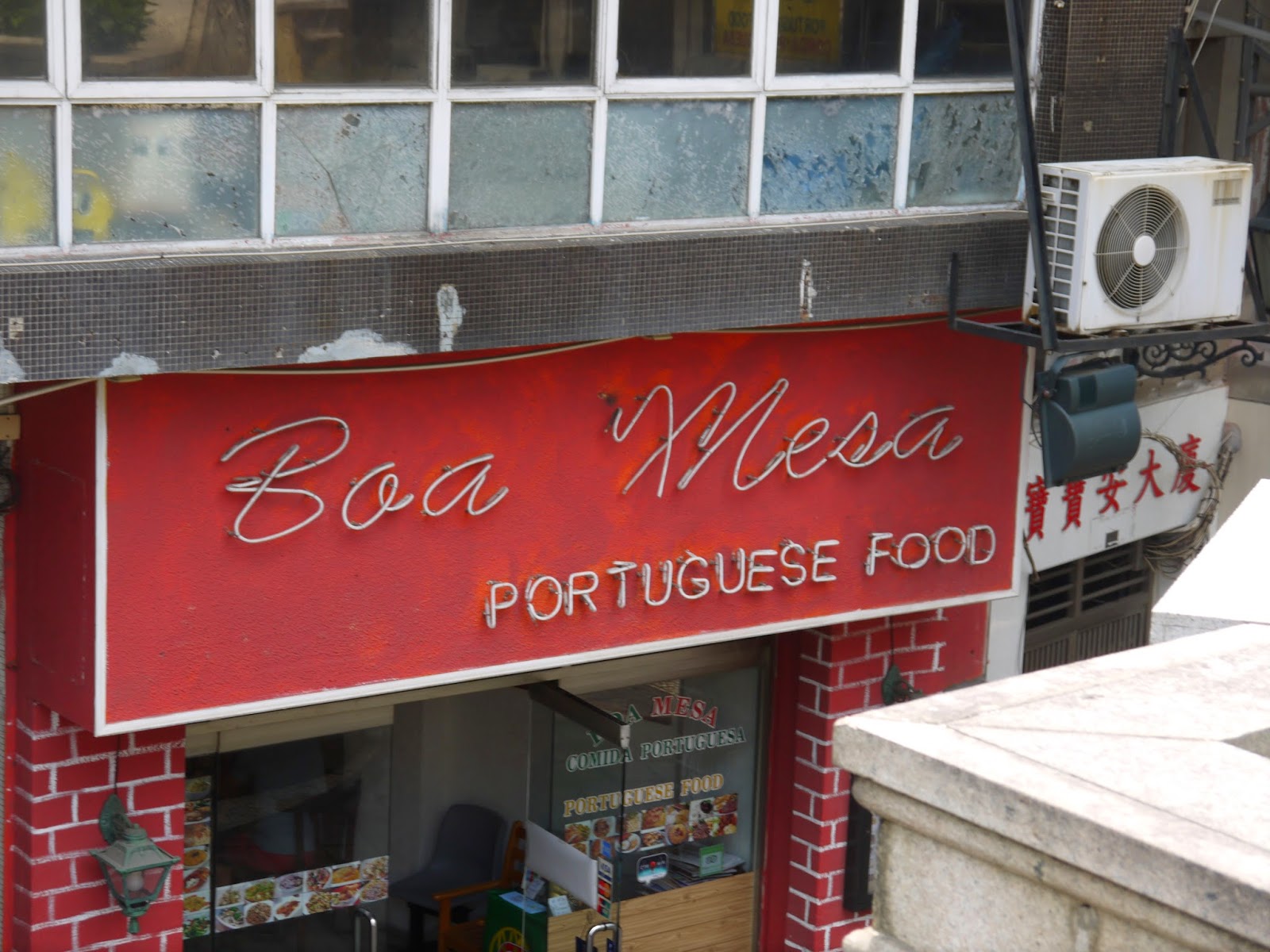 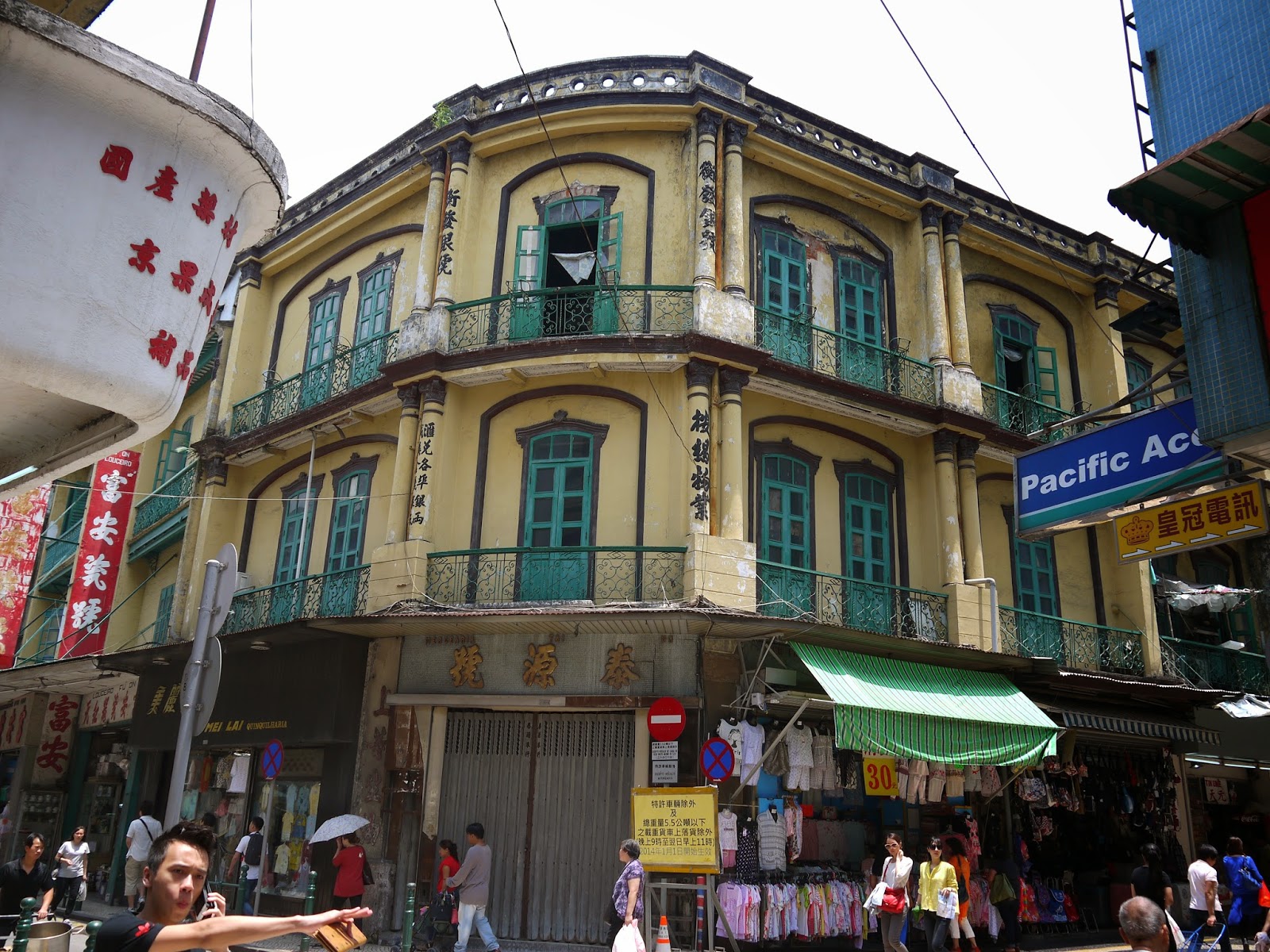 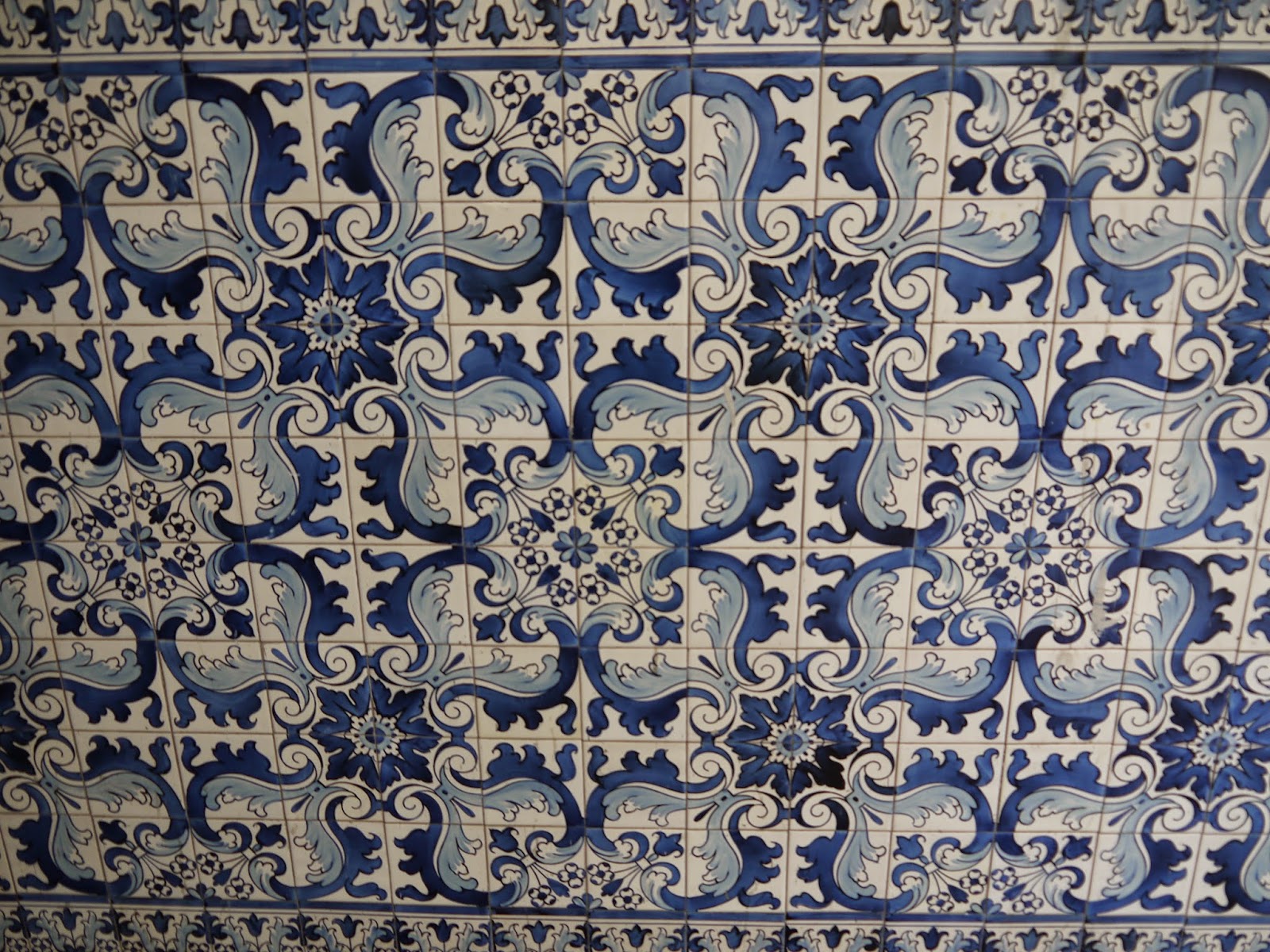