Bitter sweet - A Taste of Honey at the National Theatre 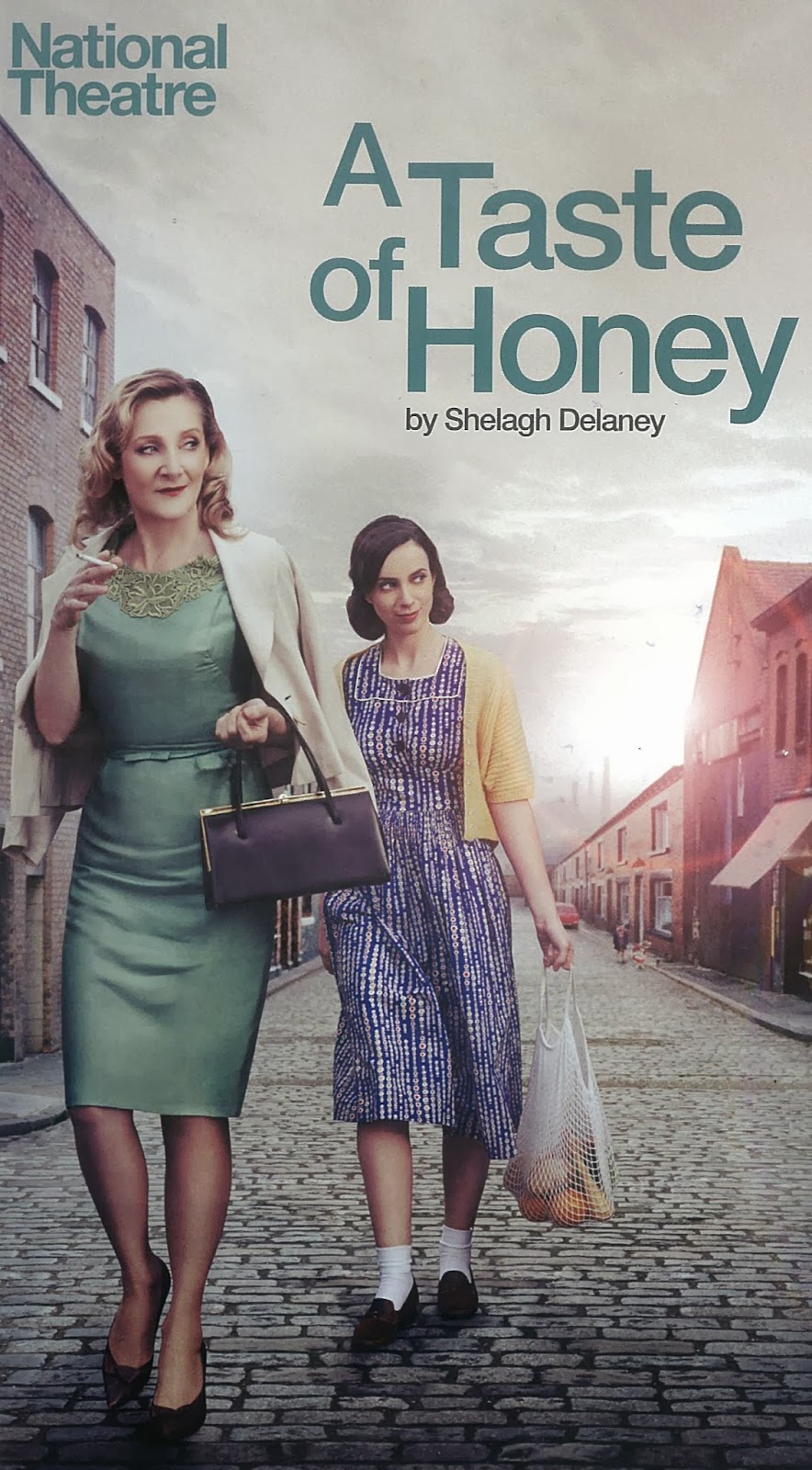 The 1961 film version of this play is one of the classics of British cinema. Dora Bryan as Helen and Rita Tushingham as Jo made these characters their own and any later version on stage or screen would have to be very very good to match the Tony Richardson directed film. The current production at the National comes very close.

A Taste of Honey was revolutionary when first performed in 1958. With its cast of a single mother, a pregnant teenager, a black sailor and a gay art student it covered issues which still divide today but were incendiary in the 1950's and 60's. Some doubt has been cast on the continuing relevance of Shelagh Delaney's play, that it no longer has the immediacy it had when first written. At the time, single motherhood was deeply shameful, interracial relationships taboo and male homosexuality illegal. Things have changed since then but single mothers are still blamed for many of society's problems, teenage pregnancies increase and recent anti-gay legislation in Uganda, Nigeria and Russia as well as less than liberal attitudes amongst some communities here at home show that things may not have changed that much.

A Taste of Honey is not only about these issues. It is also about loneliness and the need for love and friendship. Helen is not the world's greatest mother but she wants to be loved. Jo does not feel loved by her mother and seeks it with Jimmy, a black sailor. Geoff, the gay student is forbidden to find love and seeks instead a kind of love with Jo. This search for love leads to trouble - Helen may or may not know who Jo's father is and has a string of unsuitable relationships, Jo becomes pregnant to a man she will never see again and Geoff lives in fear of being discovered. Helen may be feckless. She is certainly selfish and manipulative but she does show some feeling for her daughter summed up in a word of warning "Oh Jo, why can't you learn from my mistakes… It takes half your lifetime to learn from your own". Jo chooses not to listen.

Loneliness drives the relationships in the play. Jo ends up pregnant because she doesn't want to spend another Christmas alone whilst Helen goes off with her boyfriend. Helen goes off with a younger, abusive man because she wants security. Geoff pursues the friendship with Jo so as not to be alone. Jo  makes reference to the fear of loneliness saying "I'm not afraid of the darkness outside. It's the darkness inside houses I don't like".

Set in Salford in the 1950's, the play also affords a glimpse of working class life in that period and is one of a number of plays and films of the time that focused on this subject, some of which are amongst the best British drama ever written. Witness Stan Barstow's A Kind of Loving, Allan Sillitoe's Saturday Night Sunday Morning, Nell Dunn's Up the Junction and another of my favourites Stephen Lewis' Sparrers Can't Sing. This was the period of the angry young men - not all of whom were from working class backgrounds. Women writers were far and few between and Delaney was very much on her own, not fitting in with the male crowd, very young, poorly educated and northern. She objected to the description "angry" preferring to describe herself as "restless"!


The current production at the National has Lesley Sharp as Helen and Kate O'Flynn as Jo. Lesley Sharp is positively regal as the still glamorous, still hopeful and aggressively domineering Helen, all poise and pout. O'Flynn is equally convincing as the long suffering daughter, completely believable as a vulnerable but knowing teenager whilst Harry Hepple is extremely moving as Geoff, too scared to stand up to Helen, desperate for love and security but too weak to hold on to it. There is also a great jazz soundtrack. A Taste of Honey runs at Lyttelton Theatre at the National until 11th May. See it.
Posted by Yekkes at 11:17

Email ThisBlogThis!Share to TwitterShare to FacebookShare to Pinterest
Labels: My London, Theatre