A weekend in Antwerp - art nouveau, cup cakes and a touch of Africa

It takes just three hours to get to Antwerp from London on the Eurostar, changing once at Brussels. I made my first ever visit to the city last month and discovered its architectural delights, some great cafes, a street full of antique shops and a fascinating modern museum that tells the story of Antwerp.

Antwerp has a history as a great port city, with millions of immigrants having passed through on their way to America from Eastern Europe. The MAS  (Museum aan de Stroom) in the old docks area tells the story of the this port city, including the great waves of migrants that flowed through it. It also tells something about those who made Antwerp their home. When I visited there was a small but fascinating exhibition about the city's Chinese community. The building is extremely striking, a red brick tower with stepped brick blocks interspersed with floor to ceiling glazing at each level, affording differing views of the city. The collections include thousands of objects, paintings and photographs that tell the story of Antwerp. I especially enjoyed the "visible storage" gallery where visitors can catch a glimpse of some of the museum's treasures, whilst the other galleries display items under the themes of Display of Power, Metropolis, World Port and Life and Death. There is a good book shop too. The museum opened in 2011, was designed by Dutch architects, Willem Jan Neutelings and Michiel Riedjik and is a major component of the regeneration of this part of Antwerp.

Antwerp has a Jewish community numbering about 15,000. The majority are Orthodox Jews, many working in or connected with the city's diamond industry located close to the Central Station. This community was immortalised in Diamonds, the story of an Orthodox diamond merchant living in the city on the eve of the First World War. His workers compete with each other to gain his favours , his wife suffers from his overbearing personalty, his son is without direction and his daughter is a spendthrift! Written in Yiddish by Esther Kreitman, the less well known sister of Isaac Bashevis Singer, the book was first published by Foyle's in 1944.

The Het Zuid district is home to a stunning synagogue completed in 1893. The Shomrei Hadass Synagogue in Bouwmeesterstraat was designed by architects Ernest Stordiau and Joseph Hertogs. Dominating this side street it is Moorish in style. Suffering bomb damage in the Second World War it was repaired in 1958 and declared a protected monument in 1976. Stordiau was responsible for a number of buildings in the city including a chapel and a number of residential properties in the art nouveau district, Zurenborg.

No visit to any city is complete for me without the chance to enjoy its collection of art nouveau or art deco architecture. Antwerp offers some great examples of both of these styles. I have already posted about the city's art deco riches here and so will pick out my art nouveau favourites in this post. The majority of Antwerp's art nouveau buildings are in the Zurenborg district, a fifteen minutes walk from the Central Station. A triangle of streets including Cogels-Osylei, Waterloostraat and General van Merlenstraat include over 100 examples of the style and will be the subject of a separate post.


There are many beautiful examples of the nouveau style in those streets but my two favourite nouveau buildings here are in the Het Zuid district. Het Bootje (the boat),  at Schilderstraat 2 takes its name from the corner balcony which is shaped like a ship's prow and is a tribute to the city's seafaring links. Commissioned by wealthy ship builder P. Rouis and built in 1901 it was designed by architect Frans Smet-Verhas. It is a riot of colours, curves, swirls and floral motifs that make it stand out from its neighbours. Today the house is divided into several separate units, including one which is home to the Chilean consulate.


It is a short walk from Het Bootje, to Volkstraat 40, where you can see my favourite Antwerp art nouveau building - the former Maison du Peuple (People's House). Built from 1899-1903 and designed by architect Emil van Averbeke it was built for the Socialist party and is now a Steiner School. Flamboyant in the extreme, it has fabulous glazed arches, elaborate ironwork and is topped by carved figures. Most striking of all are the freezes on the facade, showing the heroic labour of agricultural workers. There is a smaller freeze above the tiny side door, the shape of which reminds me of the national romantic architecture of Helsinki and Stockholm.

Another favourite is Mercatorstraat 102-106 in the Jewish Quarter, also designed by van Averbeke. Dating from 1901, it faces the railway viaduct and has lovely yellow brick facades and wrought iron balconies. As with the Steiner School, I was particularly taken with its door, which also resembles the national romantic architecture found in Scandinavia from around 1900. On the day I visited this part of the city, there was heavy rain and Antwerp's Orthodox citizens looked at me with astonishment as I took photographs from underneath my umbrella and from the middle of the road!

Brussels has long been famous for its cartoonists and for its street cartoons decorating the exterior walls of shops and other buildings. Antwerp also has many street cartoons, including a wonderful series of tableaux by Jan van der Veken, painted on to a blank wall at the back of the KBC Bank at Eiermarkt 8. Born in Ghent, van der Veken has been featured on the cover of the New Yorker. His Eiermarkt murals show a series of glamorous urban dwellers with romantic undertones! 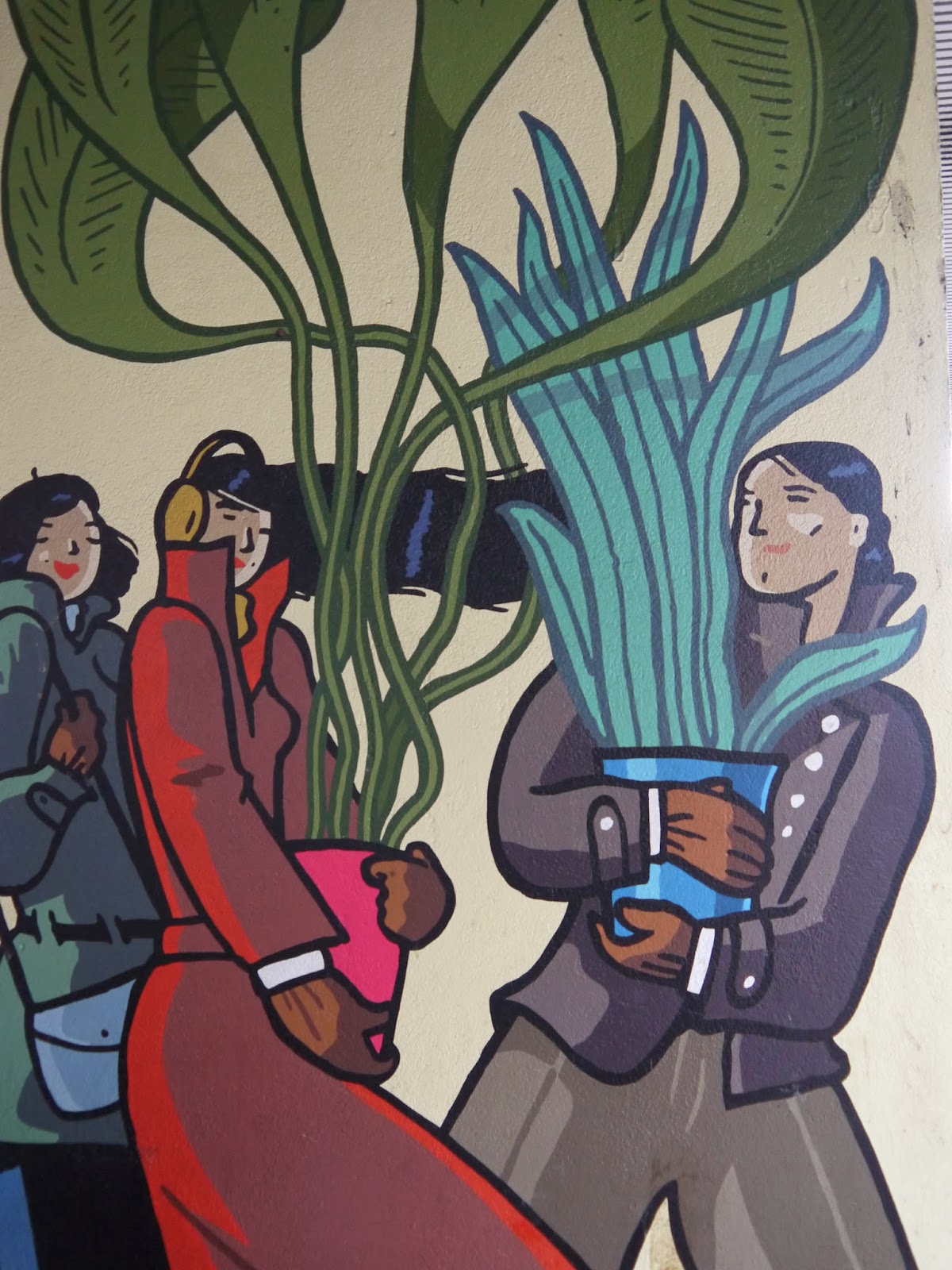 Other highlights of my visit included shopping and cakes! Kloosterstraat is a long street filled with antique shops of varying price and quality, all of them interesting and browsing them is a great way of spending an afternoon in the city. I even picked up a small tin once used to store "electroplated pins". I don't own any electroplated pins - it was the constructivist design on the lid that attracted me! Antwerp also has many bookshops. I loved Erik Tonen's shop at Kloosterstraat 48 which sells both new and antiquarian books and where you can see and buy original copies of the Dutch avant-grade magazine Wendingen that ran in the 1920's and 1930's.

This is a city that loves coffee …and cakes. Clearly it was my duty to sample the local produce. I loved my creme brûlée cupcake and very strong coffee at Momade Cupcakes, a tiny six seater cafe in the historic centre. There are more than 30 kinds of cupcake on offer and the service is extremely friendly. The lady serving when I visited on Sunday morning told me she had studied at the Steiner School mentioned earlier. Coffee and Vinyl is another good place at Volkstraat 45. There are racks and racks of vinyl records for sale at the rear of the shop, with coffee being served in the front area. Nice.

I also found a great place to stay. De Witte Nijl (the White Nile) is an excellent bed and breakfast hotel in the Het Zuid area, just a short walk from Nationalstraat and the main shopping and cultural areas. The owners are extremely friendly, welcoming and knowledgeable about their city. The hotel is furnished in colonial style with many antiques, pictures, maps and other items originating from or paying tribute to the former Belgian Congo. There are two suites which, continuing the African theme, are named after Stanley and Livingstone. I stayed in the Livingstone which was spacious, comfortable and had a great free standing bath. A big breakfast is available too!

Speaking of big breakfasts, I couldn't resist photographing the tiger enjoying his breakfast outside the Antwerp Zoo. The mosaic is one if a pair of panels on the exterior of the zoo which I didn't visit but the
entrance is well worth a look. For more pictures of Antwerp click here.

The 500 Hidden Secrets of Antwerp by Derek Blyth is a new indispensable guide book for the weekend visitor.
Posted by Yekkes at 15:19