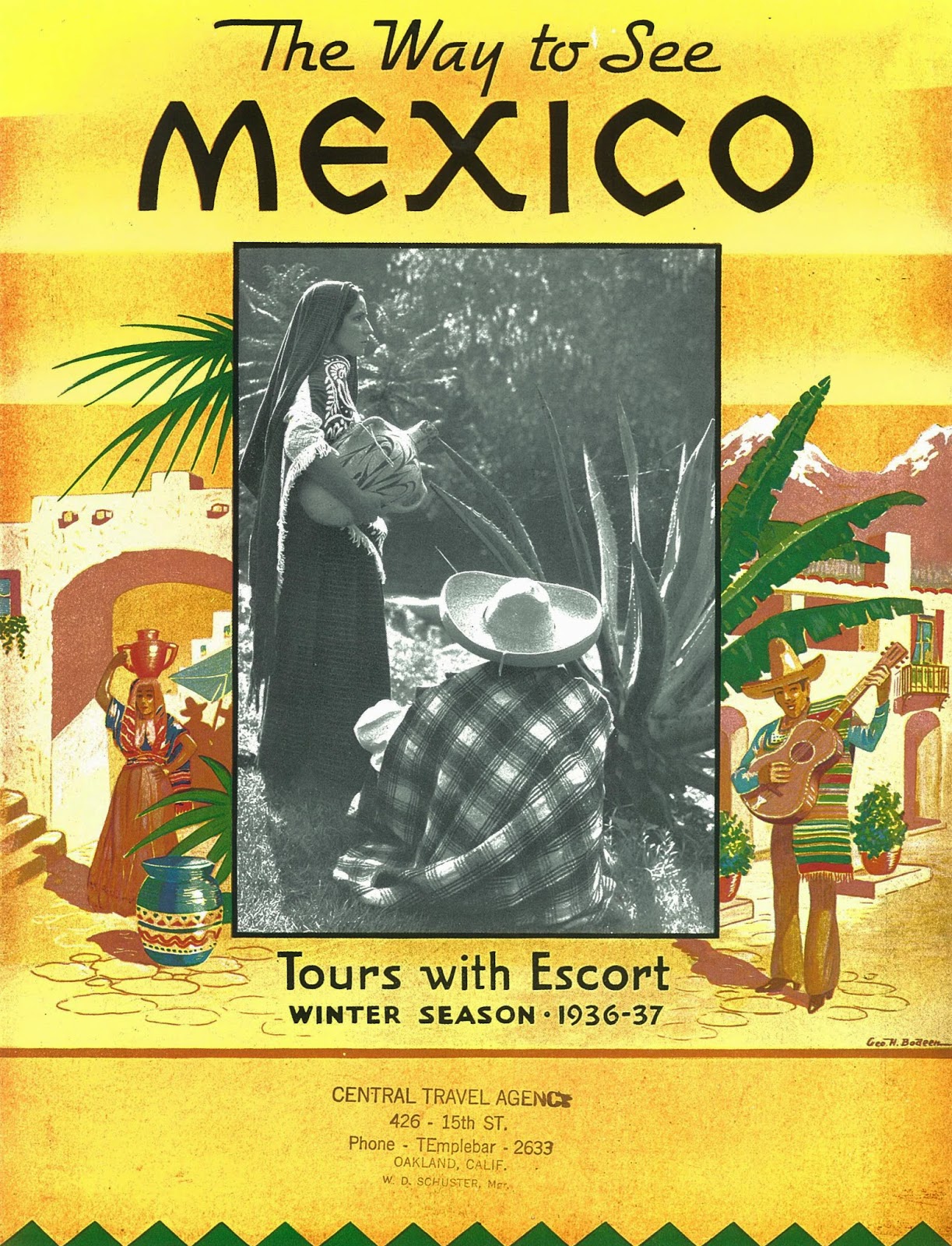 I visited Mexico for the first time last year, but travellers have been attracted to this special place for a very long time. Some have visited through necessity, including political exiles such as Leon Trotsky who found a home here in 1936, although things ended badly with his assassination in 1940. Mexico has also attracted many artists and writers including Robert Capa, Tina Modotti and Josef and Anni Albers, all of whom either made very long stays here or visited regularly from the United States, inspired by the landscape, people and culture.

During the 1930's and between 1939 and 1945, Mexico attracted new visitors including many political refugees from Europe who chose to sit out the Second World War here in safety as well as extremely wealthy visitors who had formerly summered in Europe where war was raging. The proximity of the United States means that American visitors have always been the most numerous and the image at the top of this post is from a travel brochure produced in 1936 to encourage more tourism from north of the border.

Stamped with the details of the Central Travel Agency at 426 15th Street in Oakland California, the brochure is a charming mixture of beautiful black and white photographs of Mexico's many attractions - cities, markets, volcanoes, the pre-Colombian heritage and one of my favourite Mexico City locations - Xochimilco. The photograph of Xochimilco shows an idyllic scene, devoid of the many brightly coloured boats found there today, with just a few canoes and an open expanse of water.

Customers of Oakland's Central Travel Agency must have been well off. This is no budget package tour that is being offered. The trip begins "…when you board the luxurious train that takes you through to Mexico City…with spacious, inviting, sun parlor lounge and dining cars…shower bath, valet and maid service, soda fountain and radio…". Other benefits included sleeping cars which were "…completely air conditioned, sealed against dirt and the outside weather…". Known as the "Hotel Geneve", this luxurious train delivered travellers to Mexico City from where they were able to visit numerous sites and cities including Puebla, Orizaba, Cordoba, Guadalupe and Teotihuacan, driven by employees of Private Pullman Car Tours of Mexico. 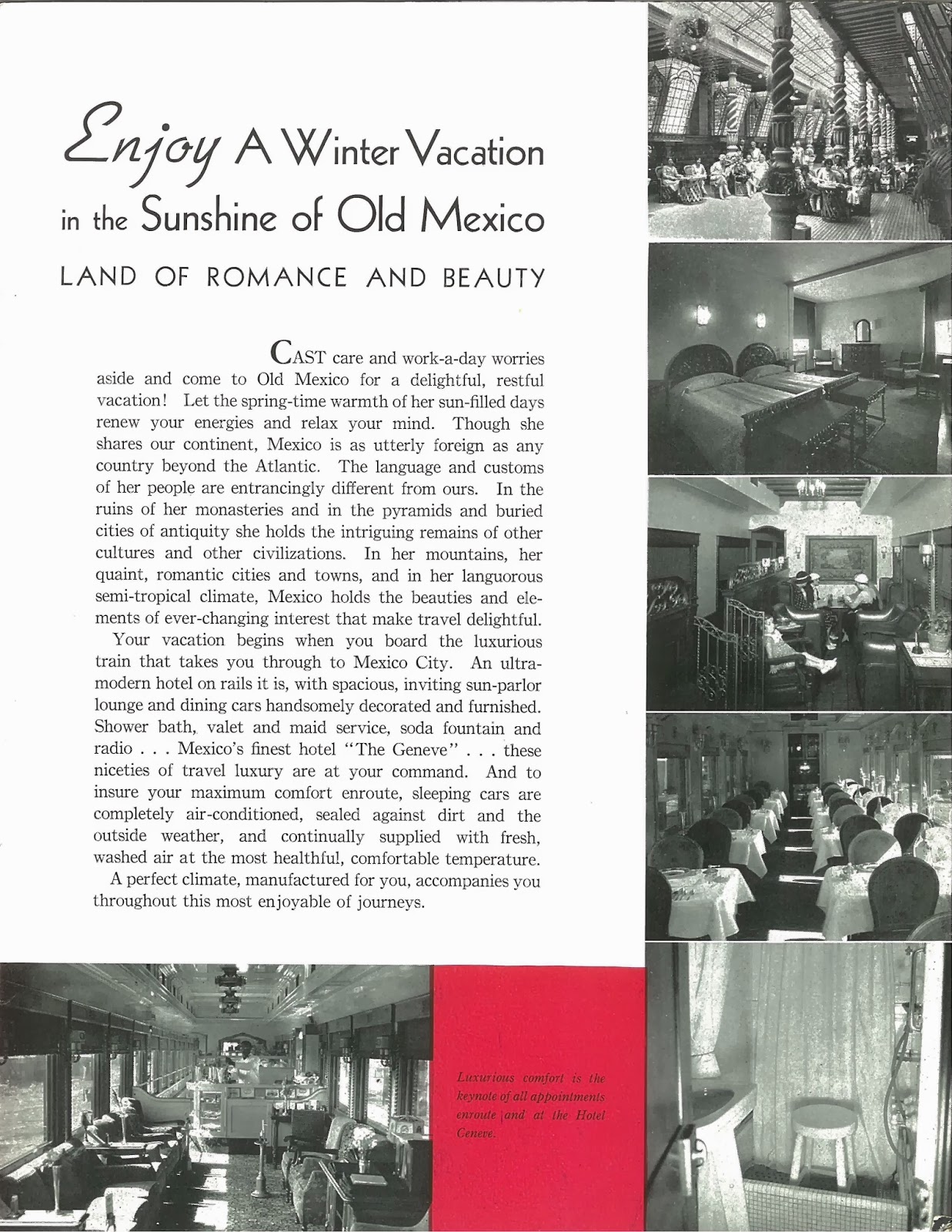 As well as providing would be travellers with mouth watering information about their tour of Mexico, the brochure also sets out some important practicalities. Early reservations are encouraged and a partial payment of $10 would secure your place. And who says the 1930's were not technologically advanced? OK, there was no internet but you could make your payment through any American Express office, at a local railway station or at a tourist agency. Special rates for children aged 6 to 12 were offered with older children paying the full amount.

All tour members had to carry a tourist permit which would be provided by American Express and astonishingly, not just visas, but also passports were unnecessary for US citizens! The brochure advises that "travellers cheques are an excellent form in which to carry one's travel funds and they protect the holder against loss or theft…" and it ends with a lovely disclaimer about any loss, injury or damage caused to travellers or their property. So, some things haven't changed in almost 80 years!

Costs for the tours are set out in a table showing prices for departure from a range of US cities (and also Toronto) according to the type of accommodation on the train which ranges from lower berth for two  people at $236.75 per person for those setting out from New York City to a drawing room for three people at $285.75 dollars per person from the same point of departure. I think I'd splash out and get the drawing room! These prices include travel from New York City to Chicago where most of the groups assembled. Other assembly points included San Antonio and St. Louis. 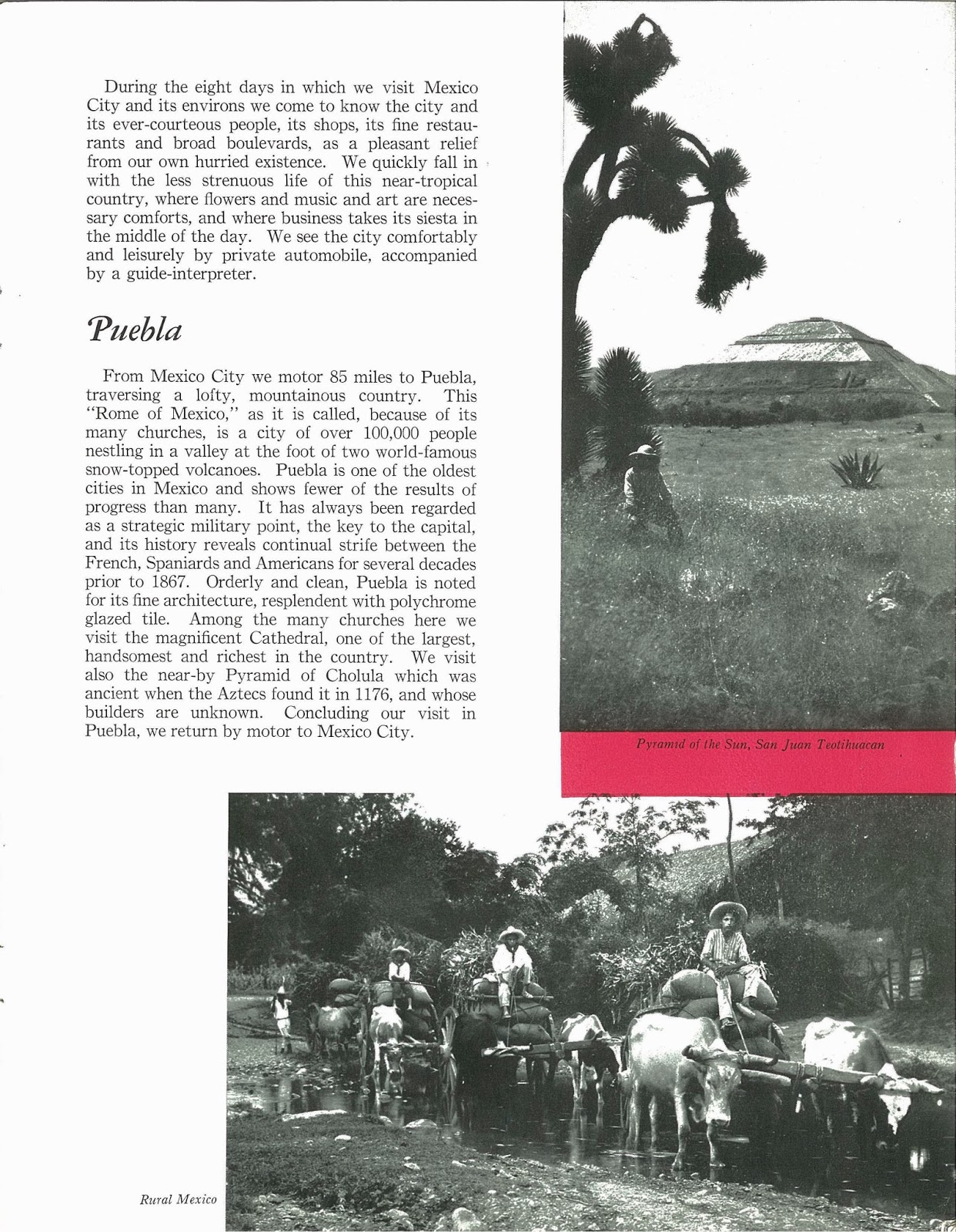 Of course, independent travel was also possible back in the 1930's and Mexico City had a number of high quality hotels for those able to pay. These included the sadly lost Hotel del Prado, completed in 1933 and designed by Carlos Obregon Santacila in collaboration with Mario Pani Darqui. Severely damaged by the 1985 earthquake, it was subsequently demolished. As well as being the focus of much of the city's social life in the 1930's and 1940's it was also home to Diego Rivera's mural Dream of a Sunday afternoon in Alameda. The mural was rescued from the wreckage of the hotel and now has a home of its own in a specially built pavilion in the Alameda park. Other high quality hotels in Mexico City included the Hotel Geneva with its palm garden, the Hotel Regis with its Italian supper club and the Sanborne Hotel which featured a mural by Rufino Tamayo. Ah those were the days.

Times may have changed since my brochure was printed but the invitation on the first page remains true - "…the language and customs of her (Mexico's) people are enticingly different from ours. In the ruins of her monasteries and in the pyramids and buried cities of antiquity she holds the intriguing remains of other cultures and other civilisations. In her mountains, her quaint, romantic cities and towns, and in her languorous sub-tropical climate, Mexico holds the beauties and elements of ever changing interest that make travel delightful…" Probably not the language we would use today but the message holds true and I am marking the calendar until I return in October this year!

You might also like Mexico - a revolution in art 1910-1940, Mexico City Top Ten and Mexico City art deco treasure house.

You can see more pictures of Mexico here.
Posted by Yekkes at 23:19